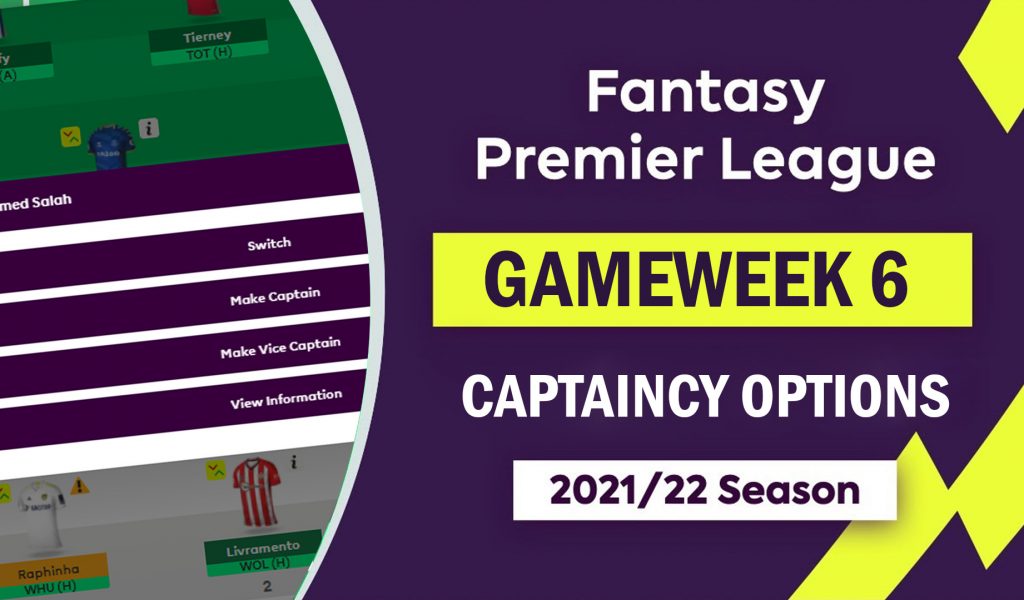 A low-scoring game-week five saw fantasy favourite, Mohamed Salah (£12.6mn), yet again, come to the rescue of many FPL managers, following his double-digit haul against Crystal Palace last weekend. Where most differentials failed to provide returns, the Egyptian once again established his worth in an otherwise underwhelming game week for most managers.

Now, with a turn in fixtures and dilemma in captaincy ahead of tomorrow’s deadline, game-week six offers numerous captaincy candidates owing to a relatively favourable set of ties for premium assets this weekend. Cristiano Ronaldo (£12.7mn) will make his second appearance at Old Trafford this season facing Aston Villa while Michail Antonio (£7.9mn), too, is expected to return to the West Ham’s starting line-up as they travel to Elland Road on Saturday.

With a puzzling set of candidates to choose from, game-week six serves up a tricky weekend for those contending for the armband. Hence, in this article, we list three assets most likely to hit double-digits this weekend, thus, narrowing down the options ahead of a pivotal game-week starting tomorrow.

Following his sending off against Southampton in game-week four, West Ham’s all-time leading goal-scorer is set to lead the line against Leeds United on Saturday. Antonio has been a revelation since the start of the campaign, having produced three consecutive double-digit haul since the start of the campaign. Despite missing out last weekend, the striker remains the highest-scoring FPL forward this season.

Facing an injury-stricken Leeds backline at the weekend, Antonio emerges as a serious candidate for the armband. The West Ham talisman has already registered four goals and the same number of assists this season, with many expected a substantial return from the forward this weekend. Leeds remain amongst the worst defensive sides in the league, having conceded 62 shots from the box and 35 on target this season. On the other hand, the Irons’ have been prolific in front of goal, with only Liverpool and the two Manchester clubs boasting superior attacking numbers in the final third of the pitch.

In a fixture likely to produce a goal-fest, Antonio boasts boundless potential in producing significant returns this weekend. With a vulnerable Leeds backline and a refreshing return to the line-up, the Jamaican has the potential to outscore several premium candidates in game-week six.

Widely considered to be amongst the most frustrating asset in recent game-weeks, the Portuguese winger has, arguably, been misfortunate in providing significant returns for FPL managers. Jota has shown immense promise starring as Liverpool’s number nine but has failed to provide an attacking return since game week two. With Roberto Firmino (£8.8mn) expected to return to the starting XI in game-week seven, the coming weekend offers Jota a chance for redemption following excruciating performances in recent fixtures.

Facing a defensively sound Brentford at the weekend, Jota will serve as an ever-threatening presence in the opposition’s box. Owing to his knack of losing his marker and provide late runs into the box, the Portuguese is bound to find himself at the end of goal-scoring opportunities at the weekend.

Though unlikely to usurp his teammate, Mohamed Salah, from being the preferred captaincy option at the weekend, Jota certainly possesses the potential to provide substantial returns in game-week six. The weekend may prove to be a deciding factor in the Portuguese’s prospects of cementing his spot in the starting line-up, thus, enlisting him as a worthy differential option ahead of a tempting tie against the Bees away from home.

Undeniably the most fabled player in the footballing world since his arrival at Manchester United, Ronaldo has lived up to expectations having scored in every game, across all competitions, since returning to Old Trafford. The Portuguese international began with a brace against Newcastle United in game-week four and has since registered two goals in two appearances for the club. With a favourable tie against Aston Villa at home this weekend, Ronaldo emerges as the obvious candidate for the armband.

In addition to being lethal in front of goal, Ronaldo has been vital to United’s scrappy victories in recent fixtures. The Portuguese leads the Premier League chart for most shots (6.5) and shots on target (3.5) per game this season. Further, Ronaldo also possesses the second-highest expected goals (1.27xG) per game, in the league this campaign.

Facing a flimsy Villa backline at the weekend, Ronaldo emerges as the most favourable candidate for the armband in the coming game week. The Portuguese international is expected to add to his goal-tally against Villa, with many predicting favourable odds for a potential double-digit haul for the forward at the weekend.