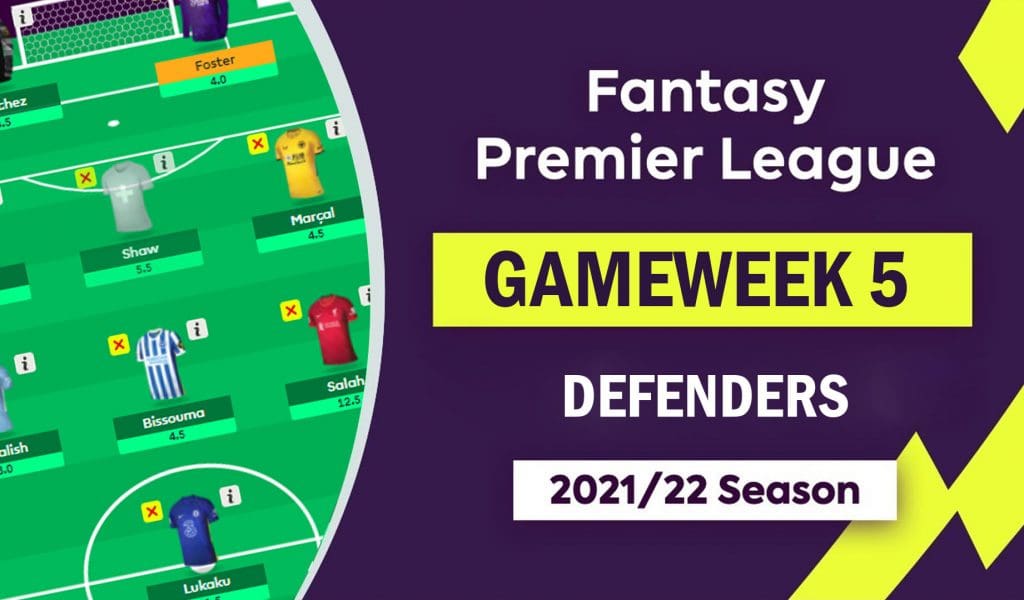 Following an intense opening week of Champions League, we return to the Premier League ahead of a gruelling period of club football. The top performers from last weekend raised several eyebrows as many FPL managers savoured double-digit hauls from both, Cristiano Ronaldo (£12.5mn) and Romelu Lukaku (£11.6mn), while few others gained the rewards for their risks in selecting multiple differentials over the weekend.

With a turn in fixtures for Leeds United and Wolverhampton Wanderers, players from both clubs are expected to remain in contention for the coming weeks. Additionally, owing to their remarkable defensive form, assets from Chelsea’s backline remain the preferred option going into game-week 5. Liverpool, too, have managed to keep three clean sheets in four outings, while Arsenal and Manchester City both offer reasonable choices for the backline.

Hence, in this article, we take a look at the three most valuable defenders ahead of the game week, including those who remain in contention to provide attacking returns and clean sheet points in addition to remaining a long-term stay within your draft.

Wolves secured their first points of the season last weekend as they completed an encouraging 0-2 victory over Watford. Bruno Lage’s side managed to materialise their attacking threat against the Hornets for the first time this season, while also keeping their first clean sheet of the campaign.

Right-back, Nelson Semedo, continued to entice FPL managers, as the Portuguese adopted several attacking positions on the pitch and came close to scoring on two occasions last weekend. In addition, Wolves have been undeniably excellent in defensive, conceding just three against in their four outings this season. Lage’s side have conceded only 22 Shots in the Box (3rd), three Big Chances (3rd), and account for the lowest non-penalty expected goals (0.8xG) in the league this season.

Meanwhile, Semedo has been crucial to Wolves’ attacking threat and defensive solidity in their recent fixtures. The Portuguese accounts for the highest number of touches in the penalty area (11), big chances created (2), and ranks second for expected goals (0.80xG) among defenders this season. With a series of seven moderately rated forthcoming fixtures, Wolves offer proven differential in every department. The Portuguese right-back emerges as the favourite pick amongst them, owing to his attacking threat and Wolves’ formidable backline since the start of the campaign.

Liverpool have been impressive in defence this season, with the returning Virgil Van Dijk (£6.5mn), having certainly bolstered their backline going into a pivotal campaign for the club. Recent fixtures suggest the Reds have seemingly retained their consistent goal-scoring form whilst remaining a formidable force in defence. And, although Trent Alexander-Arnold (£7.5mn) remains the undisputed asset in the Liverpool backline, centre-back Joel Matip serves as a valuable option for those looking to allocate funds into a different department.

Though not expected to start alongside Van Dijk this season, Matip has been a rock in the Liverpool backline. Along with his three clean sheets this season, the centre-back ranks first for expected goals (1.1xG) amongst defenders at the club and is joint-second with Alexander-Arnold for completing passes (21) entering into the final third of the pitch, amongst his teammates. In addition, Matip also ranks second-highest for carries into the final third (8) at the club this season.

Given Liverpool’s upcoming fixture list, Matip remains a reliable bargain in the backline. The centre-back is a target-man on set-pieces and is a dependable option for clean sheet points.  With Brentford and Crystal Palace to face in their next two Premier League fixtures, Matip offers the aerial threat to provide the occasional attacking return and looks likely to remain a regular name in the starting XI for weeks to come.

Arguably the most formidable defensive in Europe this season, Chelsea have only conceded one goal in their five outings across all competitions this season. The Blues remain resolute in defence and seem unlikely to concede anytime soon, despite a tricky tie against Tottenham Hotspur at the weekend. Full-backs Reece James along with Marcos Alonso (£5.7mn) remain the tempting assets in the Blues’ backline, while a turn in fixtures following game-week six provides a reasonable foundation for a Chelsea triple-up.

Despite his red card against Liverpool in game-week three, James has had an impressive start to the campaign. The right-back managed 18 FPL points in their tie against Arsenal, scoring once and providing a solitary assist, having kept a clean sheet. Additionally, he also provided the assist for Kai Havertz’s opening goal against Liverpool.

James boasts an impressive percentage for expected goals (0.54xG) and expected assists (0.68xG) this season. The right-back is the primary corner-taker and provides immense potential for attacking returns. Although Spurs, themselves, have begun their season on a promising note, the North-London club have only scored thrice this season. James could provide excellent value given the visitors’ lack of goal-threat, though their defensive organisation could impede the Blues’ attacking prowess at the weekend.