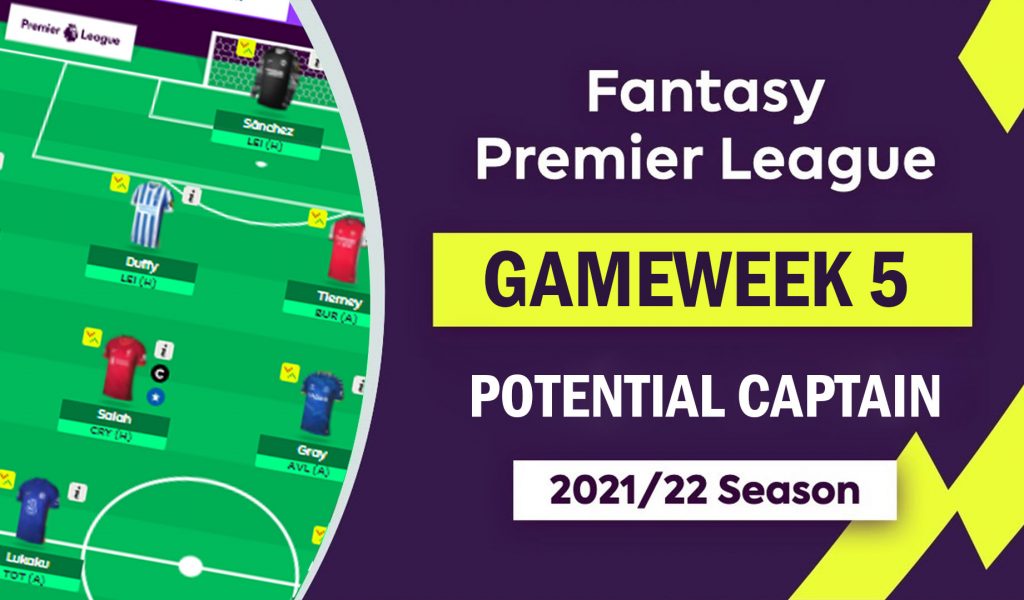 After a sizzling opening week of Champions League football, we shift our attention to the Premier League as it serves up an exciting set of fixtures this weekend. Game-week 4 saw Fantasy Premier League managers savour fruitful returns as premium assets including Romelu Lukaku (£11.6mn), and Cristiano Ronaldo (£12.5mn), among others, produced double-digit hauls in their respective games. Additionally, differentials such as Demerai Gray (£5.7mn) and Fernando Marcal (£4.6mn) produced exemplary performances, resulting in an uptick in transfers ahead of the weekend.

With a turn, in fixtures, for Wolves and Leeds United, the game week ahead provides favourable conditions for numerous assets to thrive in the captaincy role. Following their consistent performances on the pitch, Liverpool’s highly-picked assets offer exponential potential in their upcoming fixtures. Additionally, with Kevin De Bruyne (£11.9mn) back in contention, the prolific midfielder could emerge as an overlook option for Manchester City’s weekend tie. Everton, Leeds, Wolves, and Chelsea offer numerous differential captains, with each of them heading into a favourable run of games before the next international break.

Thus, owing to the assorted range options for the armband at the weekend, in this article, we take a look at three assets most likely to provide you with a double-digit haul and assess their long-term status in the draft.

Arguably in contention to be the second-most popular captaincy pick for the weekend, the Belgian has justified his value and had a gargantuan impact in Chelsea’s final third since his arrival at the club this summer. Lukaku has already registered three goals and the same number of assists in three starts for Chelsea in the league this season and is currently the third-highest scoring forward asset ahead of the weekend.

The arrival of Lukaku has boosted Chelsea’s odds to kiss the Premier League title this season, make sure to check the best site for sports betting as they are serving up a slew of odds over such possibilities. The Belgian currently ranks sixth for expected goals (2.93xG) and boasts an impressive goal/shots-on-target ratio of 0.75 in the league this season. With an injury-ridden Spurs’ backline to cope with at the weekend, Lukaku is a genuine contender for the armband. The striker grabbed his first double-digit haul of the season last weekend and is likely to produce another impressive performance against the Blues’ London rivals in game-week 5.

Though the least favourable of all several premium captaincy options, the Manchester City right-back offers promising potential for the weekend fixture against Southampton. A brilliant performance in their mid-week Champions League tie against RB Leipzig saw Cancelo register his name on the scoresheet in a thrilling 6-3 win at the Etihad Stadium, while also cementing his spot in the City line-up since the start of the season.

The Portuguese has registered three clean sheets in four Premier League games hitherto and recorded a goal and an assist in five appearances across all competitions this season. Further, he has also recorded two shots from within the box, created four chances and one big chance in the league ahead of the weekend. Cancelo boasts a decent expected goals (0.53xG) and expected assists (0.63xG) percentage, thus, adding him in consideration as a differential captain in game-week 5.

Though the visitors boasted decent defensive numbers in their last two fixtures, Manchester City are extremely capable of picking them apart. Cancelo offers enormous potential as a differential option, given City’s excellent start to the season and the Portuguese’s potential impact against Southampton at the weekend.

A brilliant start to the campaign has seen Liverpool’s right-back account for excellent numbers in the four game-weeks hitherto. Alexander-Arnold remains the second-highest-picked defender in the game and has proven his value, providing valuable returns in the defensive department. The 22-year-old registered his second double-digit haul against Leeds last weekend and has already recorded attacking returns in three of their last four Premier League fixtures played this season.

As expected of the right-back, Alexander-Arnold boasts exemplary numbers going forward. The right-back has created the highest number of chances (20) and big chances (4) and has registered an impressive number of expected assists (2.37xA) so far this season. Additionally, he also ranks as the highest-scoring defender in the game ahead of the weekend, having recorded two assists and kept three clean sheets in the league.

Owing to impressive defensive numbers and a rather sombre Crystal Palace attack, Alexander-Arnold emerges as a vocal contender for the armband this weekend. Though his teammate, Mohamed Salah is likely to be the preferred captaincy option against Palace, Alexander-Arnold’s recent form suggests he is likely to haul decent returns at Anfield in game-week 5.