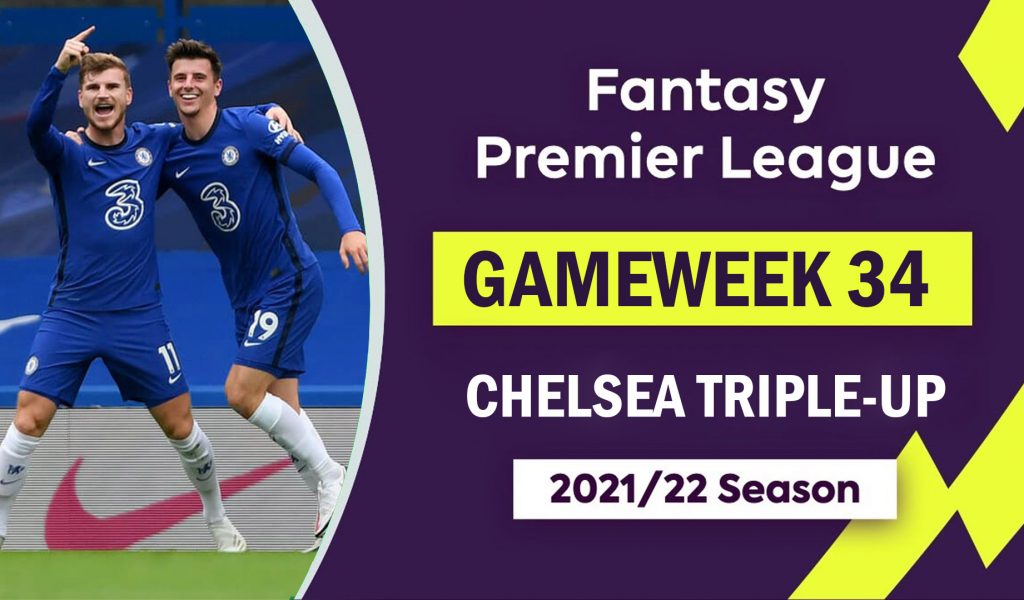 A mouth-watering double gameweek awaits FPL managers pondering over Chelsea assets as the Premier League moves closer towards the final stages of the ongoing campaign. With Fantasy Premier League having provided both, enamoured glee and mind-bending frustration throughout the season, a final push for an increase in rank remains the evident appeal as managers look to gain favourable points over the remaining fixtures.

However, while the focus remains on minimising risks for maximum rewards, a lip-smacking double gameweek could certainly tempt many into seeking a different path for the weekend. Although having gained inconsistent results in recent weeks, Chelsea’s goal-scoring form combined with their ability to win by favourable margins could see many FPL managers seek the Blues’ assets for the weekend. An intriguing double GW sees the North-London club face two sides in West Ham United and Manchester United who continue struggling to keep clean sheets whilst accounting for a combined total of two league wins in each of their last three league outings.

While the likes of Reece James (£6.3) and Mason Mount (£7.7) emerge as the most tempting, in Timo Werner (£8.6mn) and Kai Havertz (£7.9mn) the Blues comprise two assets capable of delivering significant returns over their upcoming double gameweek fixtures. Additionally, having scored a combined eight goals in their last two league outings, Chelsea’s attacking assets remain the most sought after heading into GW 34, while their defenders’ returns are likely to be dependent on their overall improvement over the coming fixtures.

With the upcoming fixtures expected to deliver numerous surprises, FPL managers will be wary of drafting in two or more assets moving forward. While assets belonging to Liverpool, Manchester City, and Tottenham Hotspur are expected to deliver the bulk of points, Chelsea too, are likely to crop up amongst the three considering their favourable run of fixtures until the end of the campaign.

A triple-up comprising the likes of Reece James, Mason Mount, and Timo Werner could potentially deliver substantial returns in gameweek 34, although, given Chelsea’s recent inconsistencies, the trio could also fall short in delivering the expected returns over the two fixtures. While Timo Werner and Mason Mount garner the temptation of most FPL managers looking to find their way into the Chelsea side, an underperforming Reece James could serve as the determining factor in a potential triple-up.

Since returning from injury, James has failed to register a clean sheet, let alone an attacking return, having accounted for only 1 point and one start in his last three league outings. Moreover, with Chelsea having kept only two clean sheets in their last five league outings, James’ addition could potentially dampen the deal unless the full-back registers compelling returns over the double gameweek.

As for Timo Werner, having delivered four goal contributions over his last two outings, the German emerges as Chelsea’s most promising asset for the upcoming GW. Moreover, having seemingly cemented his place in the starting line-up in addition to having contributed to the team’s explosive goal-scoring form, Werner remains the likeliest to deliver attacking returns in gameweek 34.

A tempting option, Mason Mount too, could potentially deliver favourable returns over the double gameweek fixtures. Accounting for four goal contributions over his last two league outings, the midfielder remains a mouth-watering prospect, as the Blues prepare to play two sides struggling for consistency in recent weeks. Moreover, having started each of Chelsea’s last six league outings, Mount is likely to remain as regular in the starting line-up moving into a favourable run of fixtures for the Blues.

Is It Worth It?

Risk permeates the thought of a Chelsea triple-up. Potentially lip-smacking yet accompanied, with the aspect of denting one’s prospects over the coming weeks, the upcoming double gameweek could prove vital in significantly influencing one’s overall rank moving forward. Having showcased their potential in recent fixtures, Chelsea’s attacking performers remain the favoured options, while their defence is likely to be a hit or miss over the upcoming gameweek.

A triple-up is likely to could sweeten one’s gameweek provided the Blues continue their impressive goal-scoring form. However, given their recent failure to keep clean sheets amidst the probability of enduring close encounters over their next two fixtures, a maximisation of the team’s assets could also fail in providing the expected results in GW34.

Nevertheless, given the potential on offer, a Chelsea double-up comprising a forward and a midfielder serves as the safest option whilst the inclusion of a defender as a replacement or in addition to the two too could contribute to one’s fortunes over the double gameweek.