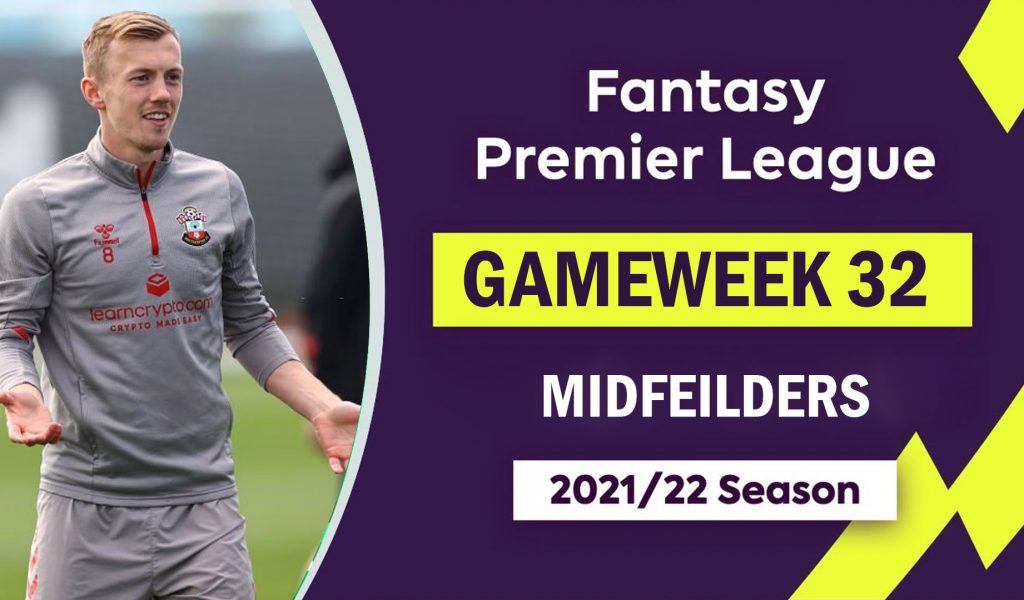 Following a captivating game-week 31, we turn our attention to the weekend as FPL managers look to make the final push towards increasing their ranks over the handful of upcoming fixtures until the end of the campaign. With the title race and battle for the top-four set to grow increasingly intriguing over the coming weeks, FPL managers will be keen on striking the right balance heading into a mouth-watering phase of the campaign.

In a game-week that saw many of the top brass fail to capitalize on their favourable fixtures, it was the mid-priced defenders and midfielders who delivered substantial returns last weekend. While Vitaly Janelt (£4.9mn) emerged as the highest-scoring (15 pts.) player of game-week, Joachim Andersen (£4.5mn), Diogo Jota (£8.3mn) and Matt Doherty (4.9mn), among others, secured double-digit hauls in an otherwise challenging game-week for most managers.

With options in the forward department yet to make a convincing case for their selection, it is the midfielders and defenders who are expected to carry on delivering the majority of points over the remainder of the season. Moreover, with the list of budget midfielders set to grow increasingly tempting over the coming weeks, FPL managers will be keen on drafting in the most favourable choices for the upcoming fixtures. Hence, in this article, we take a look at three promising midfield assets capable of delivering favourable returns whilst assessing their potential to be handed over their fixtures list moving into the final few weeks of the season.

Leeds United’s most impactful player this season, the Brazilian will be keen on delivering his best in hopes of avoiding relegation at the end of the campaign. Currently the team’s highest goal contributor with 13 goals and assists to his name, Raphinha emerges as a midfielder likely to deliver favourable returns this weekend.

Having registered two assists in his last three league outings, a fixture against relegation battling Watford allows the Brazilian to capitalize on a mouth-watering tie this weekend. The Brazilian currently tops the charts for expected assists (0.24xA) and ranks third for expected goals (0.36xG) per league game amongst his teammates this season. Additionally, he also registers the highest number of shots on target (17) whilst having completed the most passes into the 18-yard-box (44) and the highest number of shot-creating actions (106) at the club in the ongoing campaign.

Facing a Watford side struggling to move out of the relegation zone, Leeds will be keen on securing an indispensable three points this weekend. With Raphinha expected to play a major role if the club are to stay in the Premier League next season, the winger will be looking to deliver a compelling performance on Saturday.

Amongst West Ham’s most impactful performers this season, Bowen is expected to play a vital role in the club’s push for a European spot at the end of the campaign. Having registered a notable double-digit haul (13 pts.) in his previous league outing, the winger emerges as a player capable of increasing his tally of points over the weekend.

In addition to being West Ham’s most boisterous figure across the attacking third, Bowen also stands second for expected goals (0.35xG) and assists (0.19xA) per game amongst his teammates this season. Additionally, the winger is also the club’s highest goal-contributor (17) in the ongoing league campaign, having recorded the most shots on target (29) whilst registering the second-highest number of shot-creating actions (83) and carries into the 18-yard-box (18) at the club this season.

Although facing a Brentford side fresh off a compelling victory against Chelsea last weekend, West Ham will be favouring a victory on Sunday. Provided Bowen succeeds in unsettling an otherwise compact Bees defence, the winger is likely to deliver yet another substantial heading into a favourable set of fixtures over the coming weeks.

Currently, Crystal Palace’s top goal-scorer (10) in the ongoing league campaign, Zaha emerges as a tempting asset for FPL managers looking to capitalize on the club’s impressive run of form in recent weeks. Having recorded four goals in his last five league outings, the winger is likely to play a major role if the London club are to secure a place in the top half of the table at the end of the campaign.

In addition to being the club’s joint-highest goal contributor (11) this season, Zaha tops the charts for expected goals (6.6xG) whilst ranking second for expected assists (0.18xA), per game, amongst his teammates. Moreover, the winger ranks first for passes completed into the 18-yard-box (50), second for shot-creating actions (76) whilst accounting for the highest number of carries into the 18-yard-box (42) at the club this season.

Facing a Leicester City side struggling to keep clean sheets, Palace will be hoping to keep up their palpable momentum until the end of the campaign. With Zaha expected to play a pivotal role in their prospects over the coming weeks, the winger will be keen on registering his name on the scoresheet this weekend.