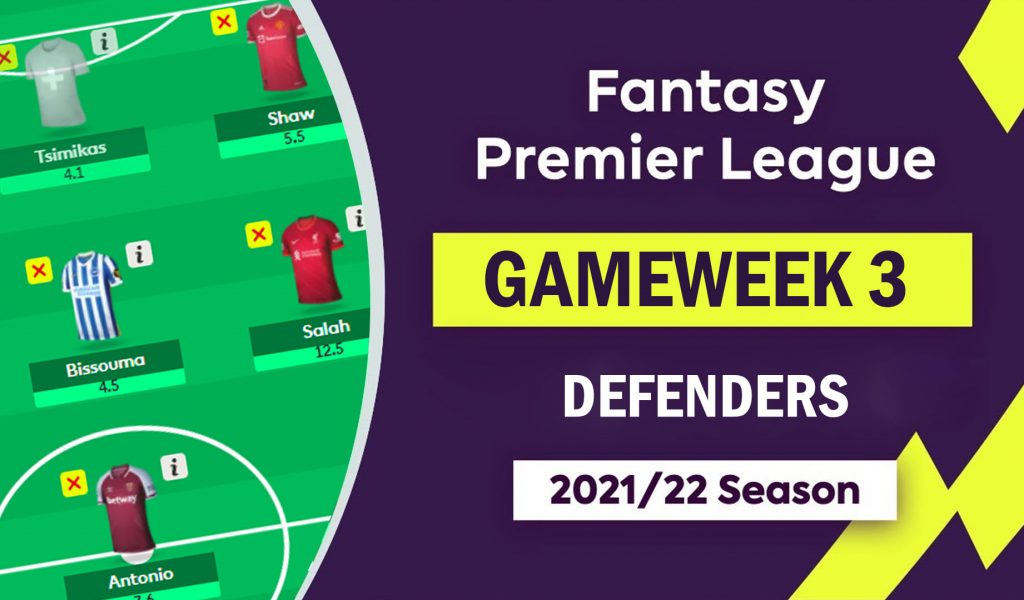 The time is running down to the Fantasy Premier League Gameweek 3 deadline, and managers have a lot of deliberation and decision-making to do following an unusual GW2. Liverpool, Chelsea, Tottenham Hotspur, and Manchester City all had a smooth GW2, with each team keeping a clean sheet while claiming three points and racking up points for FPL managers all over the world.

GW-2 jolted everyone back to the real world just as many FPL managers were relishing their huge scores from GW-1. After a week in which the two most popular players, Bruno Fernandes and Mo Salah, scored 20 and 17 points, they only scored 1 and 3 points this week. That exemplifies what Fantasy Premier League is all about, and stresses the need of having a strong enough squad to compensate for weeks when your captain pick fails.

Hence, having a strong and reliable defense is important for FPL teams to succeed. While I might not suggest spending a huge amount of your bank on your defense, a decent investment on the defense could go a long way in helping you achieve your FPL goals. Keeping that in mind, let us have a look at some of the best defenders to have in your FPL teams ahead of Gameweek 3:

Amartey is available for £4.1 million, making him a cost-effective option for enabling improvements elsewhere. Wesley Fofana’s preseason setback allowed Amartey to establish his case for a starting spot, and he hasn’t put a foot astray since. Amartey’s high 17.8 percent ownership indicates that many managers believe in him, and Norwich could be the ideal match to introduce him to your squad.

Until Jannik Vestergaard makes it to the starting lineup for the Foxes, Amartey looks a really appealing option keeping in mind his cost, Leicester’s ability to pull off clean sheets and also his versatility allowing him to play in different positions like right-back, centre-back and also, the defensive midfield.

With West Ham scoring eight goals in their first two games and facing a Crystal Palace team that has yet to get a win this season, there is no better opportunity than now to reap the benefits of the Irons’ excellent run. Aaron Creswell, their left-back, has already scored a goal and kept a clean sheet in his first two games of the season, after picking up eight assists in the prior season. Fixtures against Crystal Palace and Southampton provide greater scoring possibilities as well as clean sheet bonuses.

For GW3, Aaron Cresswell appears to be a very attractive prospect. This season, the left-back averaged six crosses per game while playing in an attacking position on the left. He might comfortably maintain a clean sheet against this Palace team while also providing a goal contribution himself.

Tino Livramento is a steal at £4.0, albeit only scoring 3 points thus yet. The Saints full-back appears to be a permanent starter this season, making a simple switch from Tsimikas (£4.1) or Amartey (£4.0) quite appealing. Southampton appear to have found a true gem in 18-year-old right-back, who has already started both of the Saints’ first two games and looked fantastic in Gameweek 2. One exceptionally impressive run in the first half, as well as his six interceptions, stood out of a Southampton team which has been pretty lackluster so far.

Kyle Walker-Peters (£5.0m) came in for Romain Perraud (£5.0m) on the 82nd minute, and thus, the former Chelsea youngster played the entire 90 minutes heading into Newcastle United’s trip next week. It’s also worth mentioning that at halftime, Ralph Hasenhüttl changed his system from 4-2-2-2 to a back three. As a result, Livramento was made to play as a wing-back, despite the fact that United’s offensive maneuvers often stifled his attacking ambitions.

In Gameweek 3, Manchester United takes on Wolves, and the Red Devils have a huge chance of keeping a clean sheet. Despite having 42 shots on goal this season, the Wolves have been unable to score. Only nine of them have hit the mark, indicating that they are poor in the finishing area.

Man United has allowed a goal in each of their first two games. Despite this, they have only allowed 6 shots within the box, 6 shots on target, 2 big chances, and an xGC of 1.9.  Their defensive statistics have been solid, indicating that they are still a solid defence. After a 1-1 stalemate and no attacking contributions, Luke Shaw ended up scoring two bonus points against Southampton last Gameweek. He’s produced four chances, one of which was a big chance, and he’s also taken some corners and free kicks. His attacking contributions will resume, as will the clean sheets.