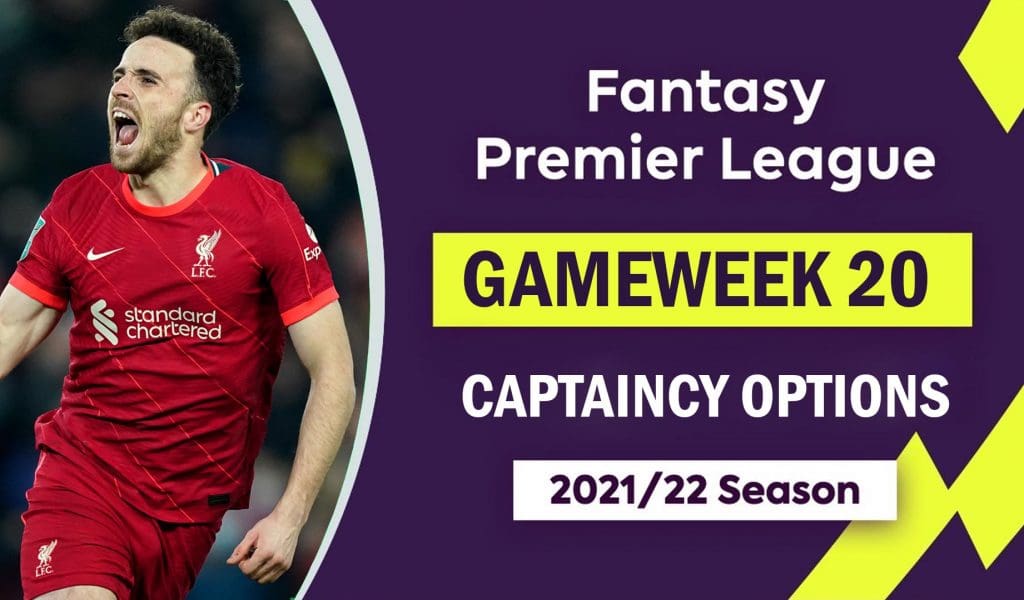 The conclusion of Gameweek 19 meant that we are now past the halfway stage of the ‘2021/22 Premier League season. As Gameweek 20 brings about the second half of the season, the FPL managers around the world have to make their decisions about their captain to get double the points ahead of the deadline. In this list, we’ll look at the options you can put the armband on.

The first name in our list is Diogo Jota of Liverpool. The Portuguese forward has scored 10 goals and had one assist in the league so far this season, and currently is placed second on the scoring charts this season only after Mohamed Salah. Priced at £8.1m, Jota has played up front for the Reds despite being listed as a midfielder in the game – and his return of 94 points in the game so far this season makes him a great asset to have in your team to provide good value for money.

The mid-week fixture against Leicester City also helps Jota’s argument to don the armband for your team this gameweek. Jota will be going into this game fresh off scoring for Liverpool against the same opposition in their Carabao Cup fifth-round fixture, and having two goals in three appearances against the Foxes – he will back himself to get on the score sheet once again against a Leicester team that has conceded the fourth-most goals in the league this season.

The next name in our list is Heung Min Son of Tottenham Hotspur. The Spurs midfielder has had an impressive season so far, racking up eight goals and two assists in the league – resulting in his total point tally of 96 points this season. The South Korean is also in some great form at the moment having scored in each of Spurs’ last four Premier League games, and has been the North London outfit’s undisputed best player under the management of new head coach Antonio Conte.

The mid-week fixture against Southampton makes him an excellent option for captaincy. The South Korean has scored 12 goals in 14 appearances against the Saints in his Spurs career, and this fixture last season at St Mary’s Stadium saw Son score four goals to inspire Spurs to a 5-2 win away from home. With the kind of form he is in along with his record against Southampton, it would not be an exaggeration to say that Son should be one of your best picks for the armband.

No captaincy watchlist this season can be complete without the undisputed player of the Premier League season so far. Mohamed Salah has lit up the Premier League so far this season, and currently leads both the scoring and assisting charts for the season with 15 goals and nine assists so far. No other player in the league has more direct goal involvements than the mercurial Egyptian, and his returns completely justify his exorbitant price tag of £13.0m in the game.

The most expensive player in the game is a complete value for money as he has accumulated a mind-boggling tally of 170 points in the game so far – and we have only just crossed the halfway mark. The fixture against Leicester City makes Salah a trustworthy pick for the armband once again, as the highest-scoring team meets the team with the fourth-worst defensive record this season – coupled by Salah’s four goals against Leicester in a total of eight appearances.

Southampton vs Tottenham Hotspur: Match Preview | Premier League 2021/22
Jarell Quansah – the Liverpool teenager who made the bench against Spurs
To Top