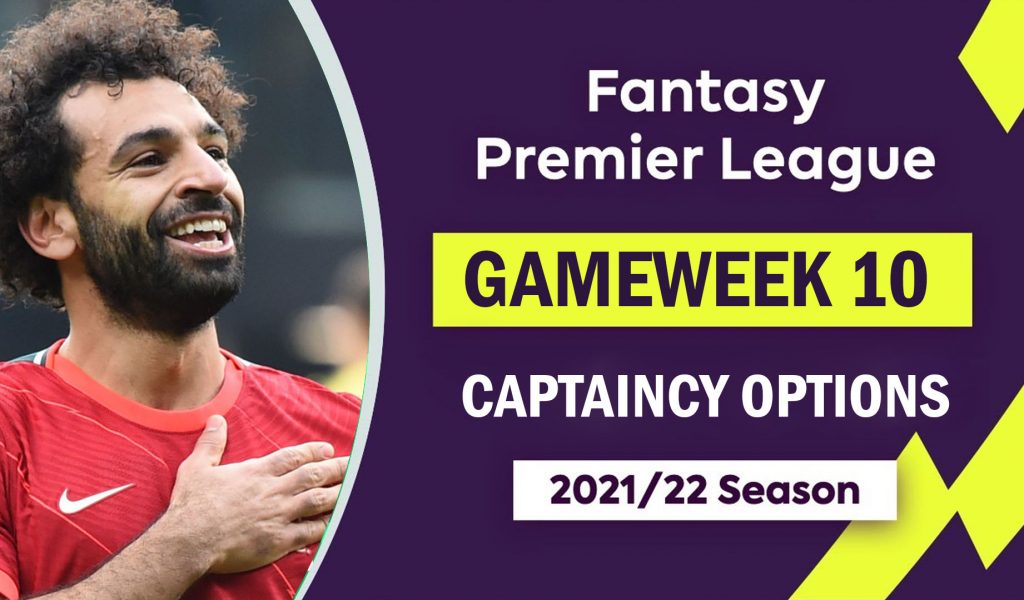 After a much-needed high-scoring game-week which, yet again, proved the resplendent providence of FPL, we turn attention to game-week as managers look to capitalize on their fortunes ahead of the upcoming international break. Amongst the premiums, Mohamed Salah (£12.9mn), now the highest selected player in FPL history (69.1%), continued his incredulous form, scoring an incredulous hat-trick against Manchester United last weekend. In the background, the likes of Mason Mount (£7.5mn) and Phil Foden (£8.1mn) produced convincing performances, with the former equaling Salah’s 24-point haul and the latter bagging a noteworthy 18 points in game-week nine.

Now, with a limited pool of proven premiums to choose from and differentials having displayed convincing performances heading into a friendly set of fixtures, the forthcoming game-week offers several managers the opportunity to rectify their shortcomings ahead of potentially high-scoring game-weeks. With captaincy selections proving to play a major factor this season, we take a look at three potential assets that remain the likeliest to produce favorable returns this weekend.

Having maintained his remarkable attacking form since returning to the starting line-up in game-week seven, Chilwell is yet to produce a blank game-week this season. The left-back has been vital to Chelsea’s attacking contributions and has been averaging an impressive 11.6 points/game in the ongoing campaign.

Although the left-back is unlikely to emerge as the foremost asset for the armband this weekend, his recent outputs certainly prove his worth as a reliable differential option going ahead into the campaign. Chilwell has scored three goals whilst keeping two clean sheets since his first league appearance against Southampton in game-week seven. Additionally, though not boasting remarkable goal-contribution statistics, the left-back registers an impressive 2.33% of shots per game whilst recording 71.4% of his shots on target this season.

Facing a precarious Newcastle United backline this weekend, Chilwell is amongst the favourites to find himself on the scoresheet in game-week ten. Having already impressed since his return to the starting line-up and the likelihood of cementing his spot in Chelsea’s backline, the left-back emerges as a reliable differential option for the armband heading into the weekend.

After failing to capitalize on an impressive display before a mid-game injury last weekend, the Brazilian is likely to return to the start line-up ahead of a significant tie against Norwich City in game-week ten. Although having only produced three substantial returns this season, the weekend’s fixture makes the midfielder amongst those likely to produce a double-digit haul in the forthcoming game week.

Although yet to fulfil his potential, Raphinha remains Leeds’ highest goal-scorer (3) hitherto, registering a noteworthy number of expected goals (0.35xG) and expected assists (0.21xA) in eight league appearances this season. Additionally, since Patrick Bamford’s injury, the Brazilian has also emerged as Leeds’ most potent threat up-front.

Facing an underperforming Norwich side at the weekend, Raphinha will be hoping to capitalize on his impressive displays heading into the fixture. With Marcelo Bielsa in desperate need of a convincing victory, Raphinha is likely to have a field day on the pitch this weekend.

Undeniably, FPL’s most cherished asset this season, the Egyptian emerges as the most obvious pick for the armband this weekend. Salah’s performance continued to captivate viewers as the Liverpool winger crossed the 100-point mark against Manchester United in game-week nine. Additionally, the Egyptian has outshined every player in FPL, having produced three consecutive double-digit hauls whilst providing an attacking return in eight game-weeks, hitherto.

Facing a Brighton side scarred by their humbling defeat to Manchester City last weekend, Salah will be keen on further contributing to Liverpool’s unbeaten run this season. Having recorded a goal + assist in each of his last three league games, Salah is likely to maintain his rampant goal-scoring run, thus, making for yet another impressive game-week for FPL managers over the weekend.

FPL 2021/22: Gameweek 10 – Forwards Watchlist
Invincible: Every WSL team that has gone unbeaten and a breakdown of their season
To Top