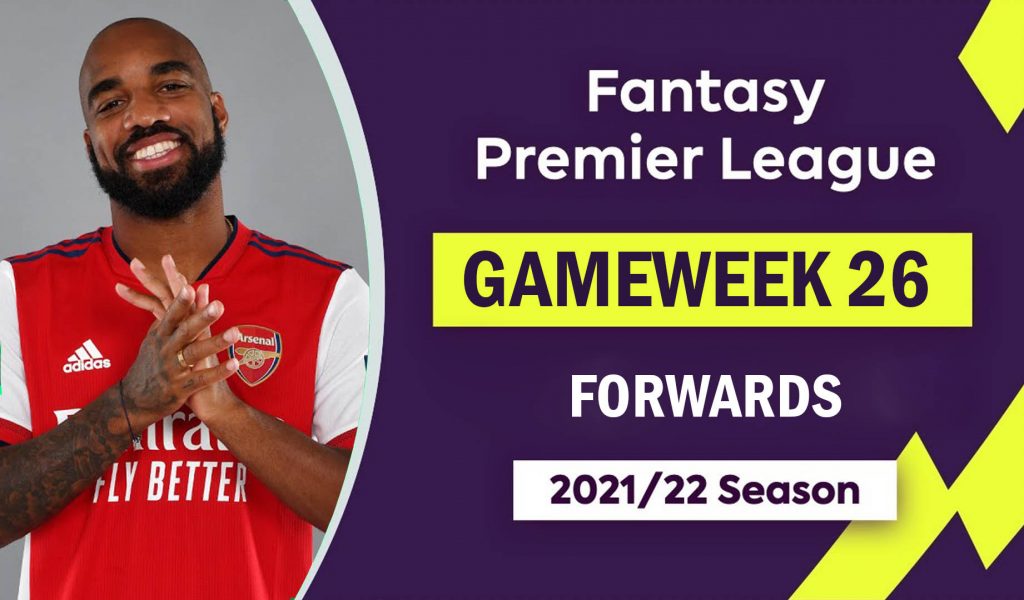 After an action-packed double Gameweek 25, another double Gameweek awaits for FPL managers with 7 teams having 2 fixtures this matchday. Liverpool and Arsenal have arguably the easiest games this week with the Reds hosting Norwich and Leeds United at home and the Gunners welcoming Brentford and Wolverhampton Wanderers to the Emirates. The following are the best Fantasy Premier League forwards managers can target for GW26 to boost their overall rankings.

After a surprising loss to Wolves at home, Spurs will be looking to bounce back and return to winning ways with the Lilywhites facing a tough fixture away at the Etihad Stadium to face Manchester City and a tricky away game at Turf Moor against Burnley who sit 20th in the league.

Tottenham Hotspur have lost their previous 3 games which include 2 home defeats to Wolves and Southampton. In these 3 games, Harry Kane hasn’t delivered with the English striker managing only 6 points and for a premium forward with a price tag of 12 million. It would have been underwhelming for the 11.8% of managers who own him. Despite this abysmal run of form, he has managed to score five goals and provide two assists this season, with 44 Shots in the Box and an xG of 10.13 (first among forwards) and has created 28 Chances with an xA of 5.47 (1st among forwards). These are some encouraging signs and with him being the penalty taker for Spurs, Kane looks like a solid option among forwards this gameweek.

King is having a similar run of form as Harry Kane, with the striker’s last goal contribution (assist) coming in GW 20 against West Ham United in a 4-1 defeat. The English striker faces Aston Villa away and Crystal Palace at home in GW 26 which look like a perfect pair of fixtures to start scoring again. On paper, these two fixtures look decent and King who has five goals and four assists with 35 Shots in the Box and an xG of 7.20 (fourth among forwards) will look to capitalize on this opportunity.

Aston Villa have conceded 36 goals this season and Palace have conceded 35 goals this season which are the 12th and 11th highest goals conceded in the PL this season despite their impressive seasons under two former Premier League midfielders Steven Gerrard and Patrick Viera respectively. King will have a chance to inflict damage on both the teams and gain some points for the Hornets who are facing relegation with 15 points in 23 games this season. With the return of Ismaila Sarr from AFCON, King might still be on penalties for Watford.

Arsenal face Brentford and Wolves at home in Gameweek 26 and on paper they have the second easiest fixtures this double gameweek behind Liverpool. The Gunners are aiming for a top 4 finish this season and Lacazette might just be the man to help them this gameweek. The previous game, Arsenal with 10 men were triumphant over Wolves after Martinelli was sent off for the Gunners. In the absence of Martinelli, the focus up top will shift to Lacazette to convert the chances. He has three goals and four assists in 12 starts this season. He has 19 Shots in the Box with an xG of 5.15 and has also created 22 Chances with an xA of 2.72.

Brentford have conceded 40 goals this season(16th highest) and are having a bad run of form with the Bees being winless in their previous 5 games and picking up only a point in this run. Meanwhile, Wolves will pose a tougher test for Arsenal with the former being defensively solid this season under Bruno Lage.

Lacazette being the only experienced striker at the club makes him a favourable long term pick too and him being on penalties is a bonus for managers looking for a striker who has very low chances of being benched. The only downside in transferring Lacazette in is that Arsenal blank next Gameweek which might not be helpful for managers who don’t have a strong bench to compensate for the French striker.