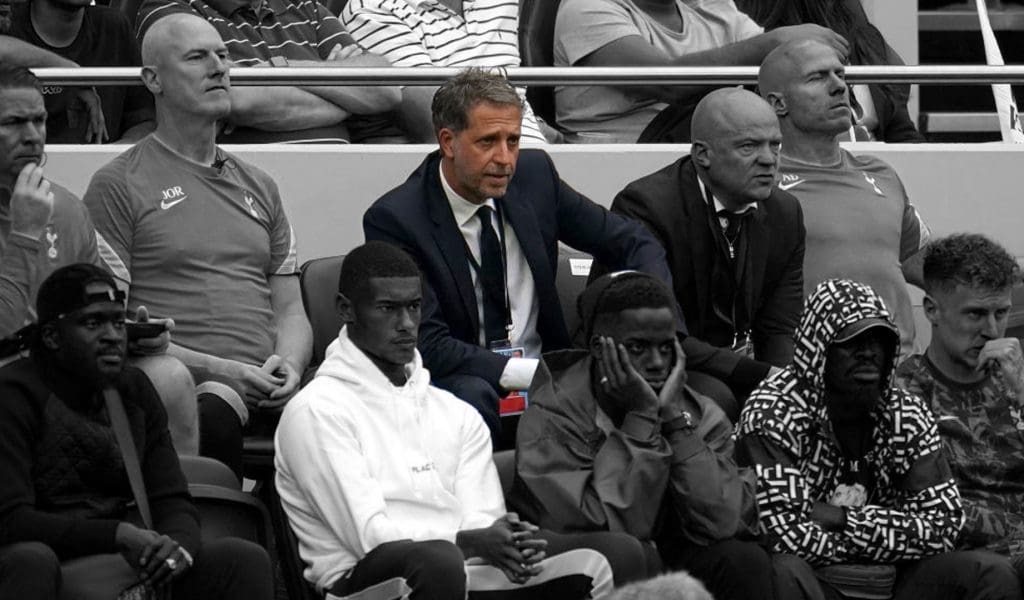 Football is getting more and more modern by the day and it feels like nearly a century ago when Cesc Fabregas threw a pizza during a tunnel brawl against Sir Alex Ferguson’s Manchester United. That was fun, but you will not see something like that in the modern game.

While one will still experience the touch-line feuds, all is forgotten when they get off the grounds and get in front of the camera during their press conferences and interviews. There is mutual respect now and a lot of professionalism off the pitch, if not on it. Thus, one can understand the disgust the Tottenham Hotspur players would have when their very own director of football is shouting off things to the referee from the dug-out.

As per the Premier League pandemic protocols, all staff members and players form one group and are supposed to share one seating area. So if anyone was wondering why Fabio Paratici has been a part of Tottenham’s dug-out, it is rules more than a passion for the game. However, there is a way to conduct yourself when you are the football director of a club, especially in a league that has tried to class up its rituals in recent years.

Excellent at his job:

Let’s get something out of the way before the antics are addressed. Fabio Paratici has quite possibly been Tottenham’s best signing this season. It does seem a little weird to call a director of football the best signing of a club when they have snapped up 5 fantastic players and have also managed to keep Harry Kane at the club. However, it has not just been the quantity, but it has also been the quality of signings.

So, the business has been sound. Paratici has done the job he was asked of, and his knowledge of the Italian market will continue to benefit Tottenham Hotspur for a very long time to come. Hence, Daniel Levy has certainly bagged a gem there. However, that is probably where the Italian’s job role should end. Scouting; negotiating; signing the player– crucial elements of the structure of any club and a football director is pivotal to all of them.

However, they have no business acting rowdy in the dug-out. Although Paratici has been stationed there due to pandemic protocols, he could simply watch the game and reap the fruits of the excellent business done by him during the summer transfer window.

It is absolutely uncharacteristic of a football director to act in this way, however, it is not the first time he has done so. Journalist Fabio Ravezzani recently wrote on Twitter saying:

‘I wrote it when he was at Juve, and many were offended. The director of a big club cannot yell at the referee from the stands like the last of the ultras. It is not just a question of style’.

Professionalism is key when you are at this kind of job and more importantly when one is in front of the camera. The Premier League is one of the most-watched sporting leagues globally, courtesy of which this rowdy nature portrays a bad image of not only the official but also of the club.

Never has there been a snapshot of Marina Granovskaia or Ed Woodward or Edu or Txiki Begiristain or any other Premier League club’s director of football acting in such an ill-mannered way. Moreover, it is starting to affect other members of the club.

The Tottenham Hotspur squad and more importantly the bench, are uncomfortable with the way Paratici is conducting himself. As players, the passion is normal, and the aggression during a hard challenge on one of your teammates is justified. They are in the thick of it every day, and they have a duty alongside the manager to deliver silverware year-in and year-out.

However, when a man in a suit with the badge of the club decides to shout at the referee for a wrong decision, it is not taken in the same way by the rest of the bench, nor is it appreciated by anybody. Although none of the members can say something to the Italian, the 49-year-old needs to learn to conduct himself.

Spurs have won 3 out of the 4 games they have faced and although a 3-0 defeat at the hands of Crystal Palace is embarrassing, the club are in a good position and have the same number of points as last year’s champions Manchester City. Nuno Espirito Santo is learning on the job, not because he does not have the experience but because this is a level up, and he needs to formulate his tactics better with his new set of players.

Thus, there needs to be a sense of optimism throughout the club and the squad rather than feeling uncomfortable on the bench because your Football Director is acting in a way-ward manner. All of these things take an effect when you are running a club the size of Tottenham. The right players are there at the club now and the investment in infrastructure and the squad has been smart.

However, discontent can ruin all this. If a star like Harry Kane does decide to stand up to Paratici tomorrow, things could take an ugly turn and that is the last thing anybody wants at Spurs. They have got past a rough summer and want to completely forget the fact that they did not have a manager at one point and their best player wanted to leave the club.

Things are finally looking up and the Italian official needs to learn to behave himself in public because every time he dons that suit on, he is representing the badge as much as the players when they step out on the pitch. There is an important need to understand where you fit in the food chain at the club and act as a member of that category.

There haven’t been any heated debates on this outlandish behavior yet but with the club set to play two London derbies against the likes of Chelsea and Arsenal, confidence needs to be ringing around the dressing room, and the professionalism needs to soak in. Tottenham look in a stable position, and they don’t need anybody wrecking the boat, let alone a crucial part of their club.

While the pandemic protocols could change in a matter of a month, Fabio Paratici needs to hold his own and behave accordingly. He is at the big time, and he now needs to act the part.