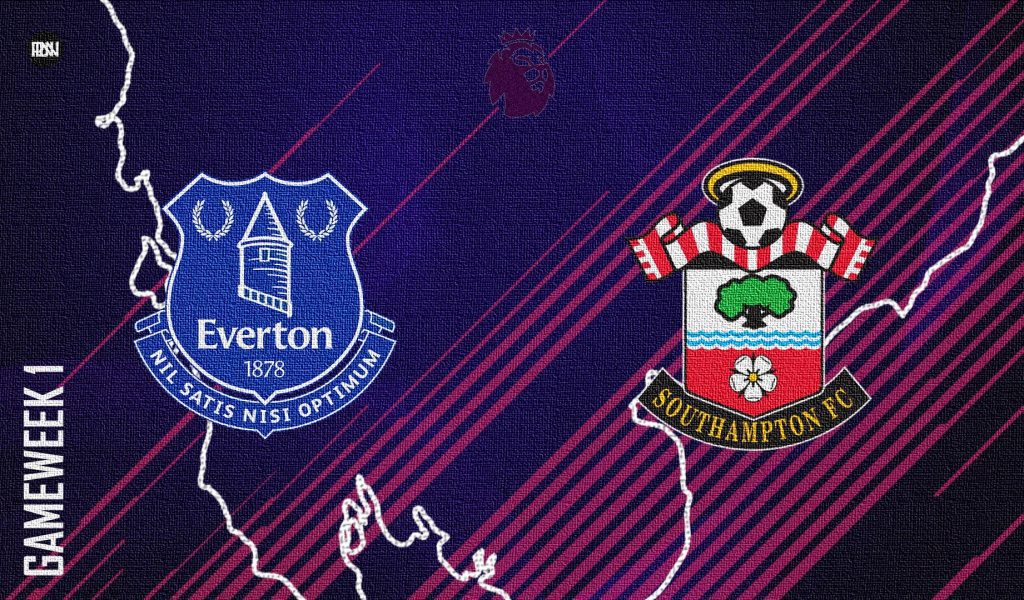 It’s the new season, it is the time for new beginnings, and with fans back inside the stadium, football will certainly be coming home! Two sets of fans who are unsure of what to expect from their sides this season are Everton and Southampton. The duo are set to lock horns on Saturday afternoon.

Rafael Benitez, who was appointed on the back of Carlo Ancelotti’s departure has been met with both shrewd as well as positive reviews, however, it remains to be seen what kind of football does the Spaniard brings to Goodison Park.

Everton finished 10th in the Premier League table last season, which after an incredible start to the season was underwhelming to see. The front three of James Rodriguez, Dominic Calvert Lewin, and Richarlison was working wonders for the Toffees, however, injuries plagued the Merseyside outfit. They eventually ended conceding more goals than scoring last season, making them the only team in the top half of the table to have a negative goal difference. All this could change under Benitez, who knows how to coach a Premier League defence.

However, Everton fans will be wary of the fact that the Spaniard’s defensive ideas could ruin their exciting frontline. The Toffees have recruited well in Demarai Gray and Andros Townsend while Moise Kean has also returned after an impressive loan spell with PSG. While there could be exciting times ahead, Goodison Park will be filled with nervous figures when they face Southampton as Benitez will be on a mission to prove that he is the same man who coached Everton’s Merseyside rivals in Liverpool to European success 15 years ago.

Unlike Everton, Southampton will have a familiar face on the touchline in Ralph Hasenhüttl, but it will not take away from the anxiousness that is surrounding the club. The Saints, who finished 15th last season, were a horrid show at the back last season, and things have not changed for the better at the back. They are on the verge of losing Jannik Vestergaard to Leicester City, who have already snapped up Ryan Bertrand from them on a free transfer. While they do have the likes of Mohammed Salisu and Jan Bednarek, they will miss Vestergaard’s ability to play the ball out from the back.

However, Southampton’s biggest loss was losing Danny Ings for £25million, somebody who scored 12 goals and provided 4 assists in 29 games for the Saints last season, accounting for nearly 30% of the club’s goals last season. Apart from Ings, Vestergaard, and Bertrand, Southampton also lost Mario Lemina and Angus Gunn.

Their recruitment has, however, been encouraging. Adam Armstrong is an incredible signing, evidenced by his 28 goals in 40 Championship games for Blackburn Rovers last season. He would be a direct replacement to Danny Ings while they have also signed Armando Broja on loan from Chelsea, who is an incredibly talented youngster while the Blues let youngster Valentino Livramento join Southampton on a permanent basis. Romain Perraud has also been brought in to replace Bertrand, however, the Saints should be careful of not letting James Ward Prowse leave the club. While they have done some good business, their outgoings do create a tiny void, courtesy of which, it will be interesting to see what Ralph Hasenhüttl and the Saints present on the first day of the new season against Everton.

Rafa Benitez will be pleased with the fact that he will have a squad free of injuries ahead of the game against Southampton. However, that does not necessarily mean that all of his players are match-fit. A lot of Everton’s star players missed pre-season games as they returned a little later than expected

from their summer holidays. Moreover, there are also some players recovering from injuries.

Everton’s star centre-forward in Dominic Calvert Lewin will be facing an uphill battle to start the game on Saturday, as he does have a niggling injury on his ankle. Richarlison, who has played a lot of football over the last year, should be available for selection, however, it remains to be seen whether he can sustain the entire 90minutes. Moise Kean, who as mentioned has returned from his loan spell in Paris is struggling with a knock. Lastly, Andres Gomes and Jean Philippe Gbamin will face late fitness tests before they are included in the squad to face Southampton. Apart from these five players, Benitez will have a 100% fit squad to select from for the first game of the new season.

Southampton, on the other hand, does not have as many players to worry about as Everton. While Adam Armstrong and Armando Broja have just arrived at the club, the former did play in pre-season games for former club Blackburn Rovers while Broja, who has arrived on loan, also featured for Chelsea during pre-season, meaning they could be involved in the game, however, the extent of it remains to be seen.

James Ward Prowse, who was suffering from an injury, will be available for selection as confirmed by Ralph Hasenhüttl earlier this week. Will Smallbone and Sam McQueen do have injury concerns and could miss out on Saturday’s game. New signing Romain Perraud will be nailed down starter at left-back while Tino Livramento might get a place on the bench as a deputy to Kyle Walker-Peters.

Could James Rodriguez steal the show like he did last season?

Carlo Ancelotti left the club this summer to re-join Real Madrid, however, he also left a void in James Rodriguez, who joined the club on his asking. Rodriguez featured heavily for Ancelotti back in his Madrid and Bayern Munich days, while the Colombian was also the chief operator at Goodison Park last season. Thus, the Italian’s departure must have hurt the Colombian, however, given the player’s personality, he will be keen on channeling his energy towards a good start to the season. Rodriguez is one of the most important men in Benitez’s squad because he is one of the very few creative sparks of this Everton side and already has a connection with the likes of Dominic Calvert Lewin and Richarlison. James would be at the very center of Benitez’s tactics because he allows the Toffees to play in a 4-4-2 when defending while also provides the opportunity to shift into a 4-3-3 while going forward. The Colombian’s ability to connect the midfield and attack led to him contributing to 10 goals in 23 games last season, and Benitez will be hoping that he can recreate some of his magic on Saturday to put the Toffees off to a good start to the new campaign.

Adam Armstrong, to fire from the front?

The former Blackburn Rovers striker is fit and ready to play the first game of the season, and Ralph Hasenhüttl will be hoping to have his frontman firing on all fronts. Most of Southampton’s football relied on the intelligence of Danny Ings last season, thus, Hasenhüttl will not want to alter his tactics all that much. However, at only 5’7, Armstrong will not be such a huge presence aerially, but his pace and ability to hold the ball up will be something Hasenhüttl will be keen on using. Che Adams’ ability to run behind the frontman is well-known, and this could be a great partnership in the making. While Armstrong may not be the tallest player, his movement in the box and ability to head to take the early header is sublime, while his two-footed nature is a menace for most defenders. Everton’s backline struggled to maintain a steady offside line last season, and given Armstrong’s ability to play on that line, it could prove to be a long night for the Toffees.

The English international was in sensational form last season as he bagged 16 Premier League goals in 33 appearances. There is a consensus that if the player had featured in all of Everton’s games last season, he could have scored over 20 goals, which in turn, could have propelled the Toffees into one of the European slots. The club missed out on European football last season by 3 points, while they were also only 8 points away from Champions League football. While this does seem optimistic, most of Calvert Lewin’s goals came in singles last season and helped Everton win games instead of drawing or losing them. While Benitez will be employing James Rodriguez at the center of his tactics, Calvert Lewin remains the crown in Everton’s jewel for the coming season as well.

While the Saints do have some exciting signings and could also have James Ward Prowse back from injury, the loss of Jannik Vestergaard and Ryan Bertrand will be huge. In such situations, you would look towards your most experienced defender and Jan Bednarek is certainly one. The Polish international made 36 Premier League appearances last season and was impressive in the first half of the campaign as well, courtesy of which he signed a five-year contract with the club. His tactical nous, understanding of Hasenhüttl’s methods, and ability to guide a defence will be more than crucial on Saturday, especially since he will be up against the quality of Calvert Lewin, Richarlison, and James Rodriguez.