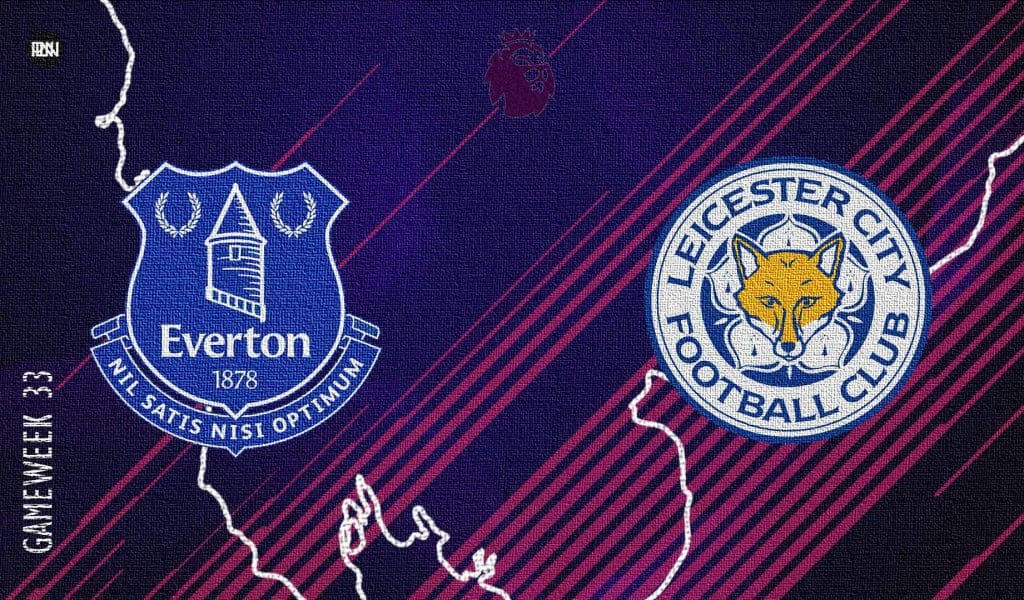 Premier League table is heating up as we hit the final stretch of games. With only 7 games left to play, it is all to fight for. The midweek round of games sees Everton host Leicester City at Goodison Park in what is a huge game for the Toffees.

Everton were last in action against Manchester United at home, as they secured a 1-0 win. It was a win that gave the Toffees hope of survival, as they still linger around the relegation zone, just three points clear of 18th placed Burnley. Only positive results in the remaining games for Everton would keep them in the Premier League for another year, and manager Frank Lampard has a difficult task on hand. Everton are locked in a battle with Burnley now, with the Toffees having played a game less than the Clarets. A win on Wednesday night would see them move 7 points clear, providing some relief to the Evertonians. It will be a tough fight against Leicester City, but the Toffees cannot afford any slip up now. Everton had an extended break since their win against United, while Leicester City have had to play four games in the space of 10 days, which could give the Toffees an advantage taking into account fatigue and injuries.

Leicester City have not had the best of seasons, failing to match the heights they reached in the previous two seasons. The 19/20 and 20/21 seasons ended with two consecutive top 5 finishes, but will have to settle for a mid-table finish this season. Luck has not always been on their side, with Brendan Rodger’s squad hit with injuries consistently throughout the season. They have not been able to string a run of positive results this season, and the end of the season cannot come sooner for Leicester fans. They are almost certainly out of any European spot this season, with the Foxes also failing to get anything out of their Europa League campaign and were relegated from the competition to the Europa Conference League.

Brendan Rodger’s side were drawn to play against PSV in the quarter-finals, and were successful in the second leg, winning 2-1 away from home after a goalless draw at home in the first leg. The away win meant they progressed to the semi-finals of the newly founded competition, and could have a real shot at winning yet another trophy for the second season running. Rodgers and his side will be aware that winning the Europa Conference League is the only way of securing Europa League football for next season, and they could choose to focus all their attention on the cup instead of the league. The Foxes were last in action against Newcastle United away from home as they lost 2-1 thanks to a brace by Bruno Guimaraes. Leicester will hope to bounce back against the relegation-threatened Toffees here on Wednesday night.

Everton’s on loan midfielder Donny van de Beek, who celebrated his 25th birthday on Monday, should return to the squad after he missed out against Man United, being ineligible to play against his parent club. The Toffees will however be without a few other key players, with midfielders Tom Davies, Andre Gomes and Andros Townsend all injured. Defenders Yerry Mina and Nathan Patterson with both missing through injuries as well. Michael Keane and Allan returned to the lineup against United after serving their respective suspensions and will be expected to start again on Wednesday night.

Leicester City will have defender Ryan Bertrand missing through injury, along with goalkeeper Danny Ward who has undergone knee surgery. 35-year-old striker Jamie Vardy is also ruled out for Wednesday’s game, but is likely to make his return soon. Defensive midfielder Wilfried Ndidi has also been missing from action since mid-March and is not expected to play again this season. Boubakary Soumare remains a doubt after he missed out against Newcastle with muscle soreness. Rotation could be a heavy feature on Sunday, taking into account Leicester City’s fixture congestion.

Everton are in a race to survive another year in the Premier League, and while the Toffees are in the driving seat, they have Burnley hot on their heels. The relegation battle between the two clubs seems set to go down to the wire, and it is hard to tell who will come out on top. Everton have to face Leicester City (x2), Liverpool, Chelsea, Arsenal, Brentford, Watford and Crystal Palace, from now till the end of the season, and their run-in is arguably one of the toughest in the league. In contrast, Burnley have got Aston Villa (x2), Newcastle United, Wolverhampton Wanderers, Watford, Southampton and Tottenham Hotspurs to contend with, giving them some advantage over the Toffees.

On Wednesday night, the Toffees face a Leicester City team who are a shadow of their former selves. They have not shown the same quality of football that they have shown under Brendan Rodgers in the past couple of seasons, and Everton will believe they have a chance to get all three points at home, especially after their last home again.

It is no secret that Leicester City like to play with possession, which could bode well for Everton. Frank Lampard’s side has resorted to defending and counter-attacking the opposition, and they are expected to do the same on Wednesday. Leicester City have been nervy and vulnerable on the counter in recent weeks, more so since defensive midfielder, Wilfried Ndidi was ruled out through injury. Ndidi was the sole cover for their defence, and along with Youri Tielemans made the Foxes organized in defence and attack. Nampalys Mendy has not been up to the same level that Ndidi was, and that has hurt Leicester as their torrid season continues.

Everton will need to go all out for a win, with Burnley dropping points on the weekend after a 1-1 draw with West Ham United. They will have the chance to open up a 7-point gap to the Clarets, Frank Lampard will hope his men can grab the opportunity with both hands.

The English striker had a wonderful 20/21 season, scoring 21 goals in 39 games in all competitions, and was expected to carry on in the same fashion this season. However, Calvert-Lewin has struggled with injuries and has not had a consistent run of games, playing only 14 games in all competitions this season. DCL has 3 goals and an assist in the Premier League so far, and while he has recovered from his injuries now, the Englishman is gradually easing in. He played the full 90 minutes against Burnley in the midweek, only his first full game since February 19th. He has not scored in the league since August last week, and will be hoping to get one on Saturday. Leicester City have a few defensive issues which the English striker could capitalize on, and Lampard will hope his main striker can get back among the goals on Wednesday.

The young English midfielder is a product of the Leicester City Academy, making his debut in January of 2020. He made only one appearance, subsequently going on loan for the next 18 months. However, a series of injuries in the Leicester squad saw the 23-year-old make his Premier League debut this season on 28th August 2021, and since then has been a regular feature in the starting 11. He has put in some strong performances of late, and has become a reliable choice for Brendan Rodgers. A goal and assist in the win against Crystal Palace, was followed by another strong performance in Leicester’s defeat to Newcastle United. Dewsbury-Hall has all the makings of a future star, and will be expected to line up in the Leicester midfield again on Sunday