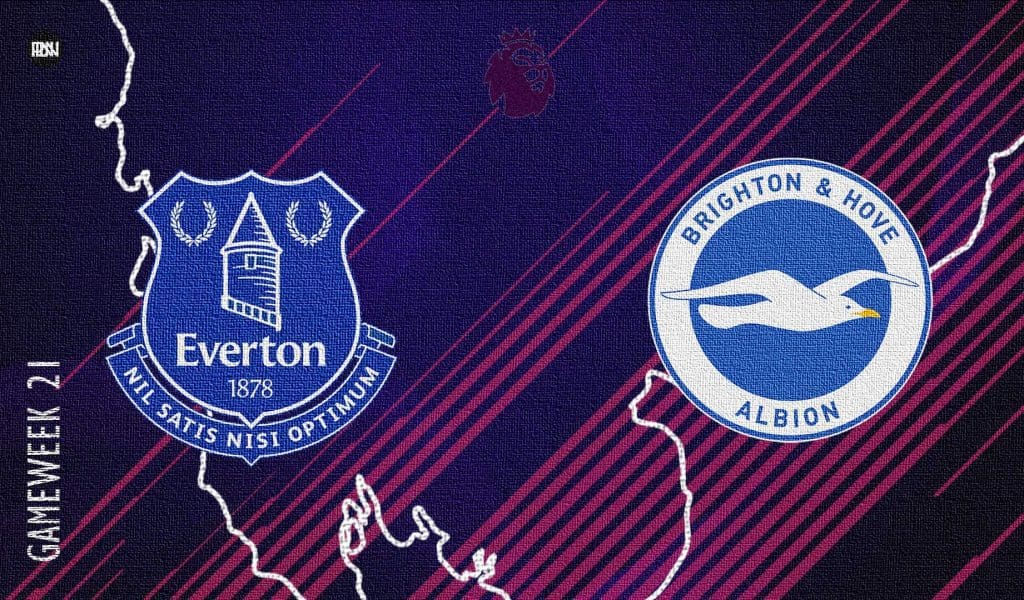 As a hectic December and a tumultuous 2021 comes to its conclusion, everyone related to the football world is already looking forward to 2022, and what the new year has in store for them. As the new year begins, we also welcome the January transfer window which opens on the 1st of January 2022, as clubs and managers look to strengthen their squad one last time in the season for one mighty final push in the second half of 2021/22 season. The new year brings us exciting football action from the very first day itself, as we see Everton welcome Brighton & Hove Albion at home.

Everton and Evertonians will be looking forward to matchday, after a hiatus of more than two weeks. COVID-19 cases and injuries in the squad meant that Everton’s games on Boxing Day against Burnley and against Newcastle United on 30th December were postponed. This has seen the Toffees get some additional rest, with the club not involved in the most hectic period of the season. Manager Rafa Benitez will hope his players will be fresh and raring to go on Sunday. The Toffees currently sit in 15th with atleast a game in hand over the rest of the teams around them. They last played against Chelsea at Stamford Bridge and similar to Brighton, came away with a point in a 1-1 draw. Everton now face a Brighton team that has played 2 games in the space of 3 days, and will have a few fatigued players. The Toffees will hope to take advantage of that and get three points that will lift them higher up the table.

Brighton & Hove Albion were last in action against Chelsea in London, where they shared the spoils thanks to a last-minute equalizer from substitute Danny Welbeck after Romelu Lukaku had put the Blues ahead in the first half. That draw saw the Seagulls stabilize after a win in the previous game against Brentford saw the end of their 11-game winless run. Brighton were decent enough in the game at Stamford Bridge and troubled Chelsea on a few occasions. Graham Potter will have been pleased to come away with a point there, as they now turn their attention towards Everton, a team that has already beaten them once this season. Brighton currently lies in 10th place, but a win would see them go up to as high as the 8th place and just three points behind Tottenham Hotspurs in 7th.

The big news for the Toffees will be the expected return of striker Dominic Calvert-Lewin. The English striker, who has been the main source of Everton goals for the past two seasons, has been out with a broken toe since August 2021, and is now set to return back to the lineup. Other than Calvert-Lewin, midfielder Tom Davies could also return from his injury, providing a boost for Rafa Benitez. However, forwards Richarlison and Salomon Rondon are set to miss out on the first game of the new year, along with Andros Townsend and central defender Yerry Mina.

Brighton manager Graham Potter confirmed that Belgian Leandro Trossard was back in training, and could be in contention for selection on Sunday night. However, captain Lewis Dunk and Jeremy Sarmiento have been ruled out of the game. There are no fresh injury concerns for Potter, as they look to see out a hectic period of fixtures with a win on Sunday.

Will New Year be kinder to Brighton & Hove Albion?

Brighton & Hove Albion had a mixed 2021 year. The early months of the year were dominated by their struggles in front of goal, with an underperforming xG to deal with. Their forwards were not clinical enough which will have given manager Graham Potter a huge headache. However, as the 20/21 season ended and the new 21/22 season began, the Seagulls seemed to have turned the corner in their goal-related struggles.

Forwards Neal Maupay, Leandro Trossard, Solly March and Danny Welbeck looked in rhythm with each other and their goal scoring issues suddenly disappeared. Manager Graham Potter was credited with the turnaround and with no new forwards signed, it was purely down to the training sessions. The Seagulls started the new season brilliantly, winning 4 of their first 5 games and climbing to 4th in the league. Graham Potter’s style of play and philosophy were working for the Seagulls, and they looked a really tough outfit to beat. Their early form suggested that they had the makings to be a surprise contender for the top 6 positions and even challenge for the European spots.

However, they form fell off a cliff after the 5th game-week, and they have since gone 10 games without a win in the league. They were hard done by on a few occasions, but they have struggled massively in front of goal on most times, and now find themselves in 10th position, but within a shout of the top 6 places. They have drawn 9 out of 15 games so far, and their struggles and issues from the last season have seemed to return. The Seagulls are underperforming again in terms of xG (Expected Goals for) metric, with Graham Potter’s men having an xG of 18.22 while only scoring 14 goals so far in the league. They seemed to have turned this corner at the start of the season, but their problems have returned again, and that has been a crucial factor in their wretched run of 11 games without a win. They broke that miserable streak with a 2-0 win against Brentford and followed it up with a point away at Stamford Bridge against Chelsea.

Their away form has been one of the best this season, having suffered just one defeat on the road so far this season – the joint lowest number of away losses alongside Manchester City and Chelsea – and have discovered a good habit of picking up away points. Against an Everton side which is struggling for form at the moment, they could have a real chance of getting three points and starting the new year with a bang. Potter’s and Brighton’s aspirations for the remaining season would no doubt be to get as high up the table as they can, and they could have a chance of finishing in one of the European spots.

There is actually not much to choose for Everton fans as the team is really not stepping up in any position on the pitch. Though one man who needs to prove his metal is Pickford. The English no. 1 is under pressure due to performances by Aaron Ramsdale and will have to give his everything to keep his claim before the World Cup next year. Playing behind a poor defence has not been helpful for the Everton no.1, but he has come up with some wonderful saves to bail out his defenders many times this season. His clean sheet stats do not tell the whole picture, but Pickford has been brilliant this season. hE stepped up well against Chelsea, and has stepped up for the Toffees on numerous other occasions this season, will be again the main man for them on Sunday.

After starting brilliantly with two goals in two games, Neal Maupay suffered a lapse in performance, scoring just 4 in the last 12 games. However, he showed his class in the last two games, with 3 goals in the last four games against West Ham United, Southampton and Brentford taking his tally to 7 so far in the league. He is just 3 goals away from his best goal-scoring season in the Premier League, and looks all set to break it this season. He has shown glimpses of his true attacking and prolific nature this season and has yet to find consistency, and will hope that he can make it atleast 4 goals in the last 5 games against a weakened Everton side on Sunday. Maupay has started every game but two in the league so far, and his recent goal-scoring exploits will have made him a guaranteed starter against Everton, although rotation could play a part. Like the visitors, the Seagulls also have a few injuries in the attacking department which has led to Maupay shouldering the burden of scoring goals. He is the club’s top scorer this season, and all eyes will be on him to help Brighton get the best start to the new year.

Chelsea vs Liverpool: Match Preview | Premier League 2021/22
Jack Wilshere – Is a fairytale Arsenal return on the Cards?
To Top