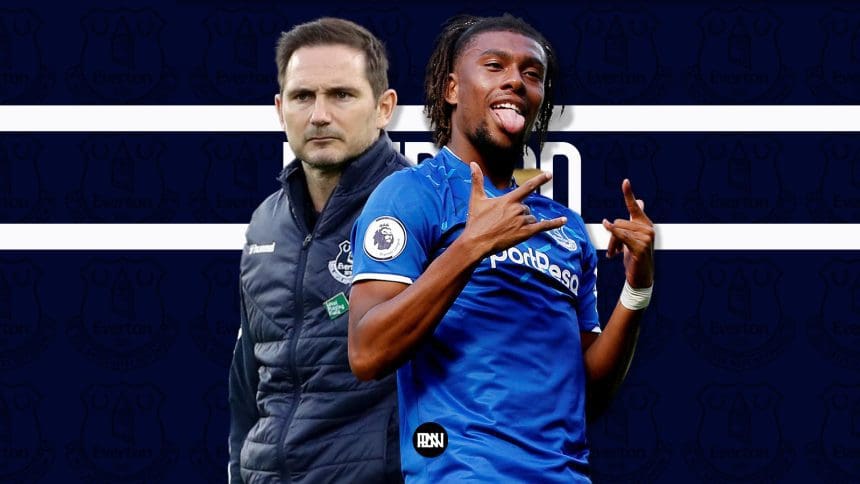 On Sunday, Goodison Park finally roared in delight as Everton secured their first victory of the season in their 7th outing. Questions have been raised about Frank Lampard, and they appeared to be in the relegation fight once more with Richarlison’s departure and Dominic Calvert Lewin’s forced absence due to injury. Fans have also criticized the club owner Farhad Moshiri for splashing the cash only to recruit poorly in the past few years.

However, they finally seem to have nailed their strategy, bringing in shrewd signings this time around. After a month of the 2022/23 campaign, there is a feeling of togetherness among the squad and the ever-present fans at Goodison Park. There is a sense that the club and its supporters are moving in the same direction, and most importantly, in the right direction.

The addition of Premier League proven defenders in Conor Coady and James Tarkowski has worked in Everton’s favor so far. With that said, the midfield base, which is certainly the difference maker to any club, is the prime reason the Toffees look a settled side in and out of possession. Alex Iwobi, Idrissa Gana Gueye, and Amadou Onana have just played one game together, but their partnership looked promising. Combined with Lampard’s impetus on developing a solid shape, Everton now seems to be a hard side to beat, especially on their home turf. And so, this article focuses on the team’s midfield structure and how Lampard is getting the best out of each of the three.

We have to talk about Alex Iwobi

Fans have been quick to embrace Alex Iwobi’s return to form at Everton. His turnaround in fortunes has coincided with the arrival of manager Frank Lampard, and a change in position. Signed as a winger from Arsenal in 2019, he never really got going in the role and continued to struggle. But as the blue side from Merseyside did not have the numbers in midfield, Lampard eventually started using Iwobi in central midfield.

And boy, did he grab the opportunity in both hands. The Nigerian international is currently one of Everton’s key players and plays a crucial role in ball progression from midfield to attack (as seen in the graph). He also tops the chart in terms of passes into the final third and shot-creating action citing his ability to progress as well as create opportunities for his teammates. 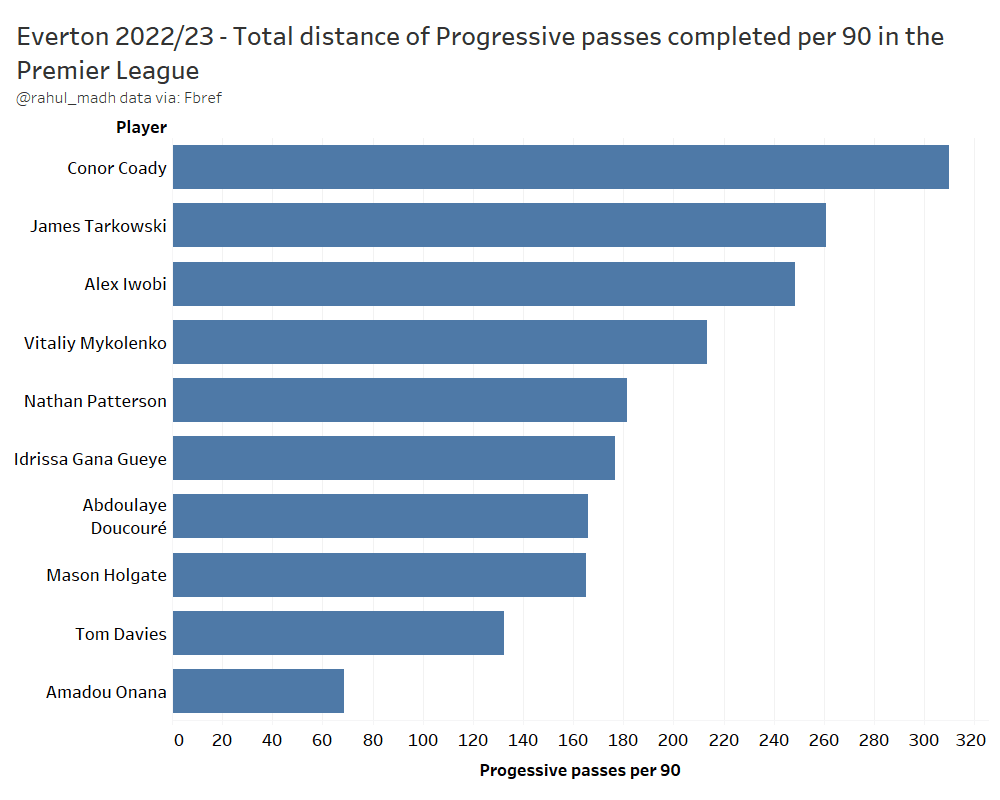 Lampard has started Iwobi from the left side of a midfield 3 but has given him the freedom to roam around the pitch as well. Against West Ham United, Iwobi constantly dropped between the lines to create central overload (with Maupay and wingers tucking inside), which caused trouble for West Ham’s Declan Rice and Tomas Soucek. 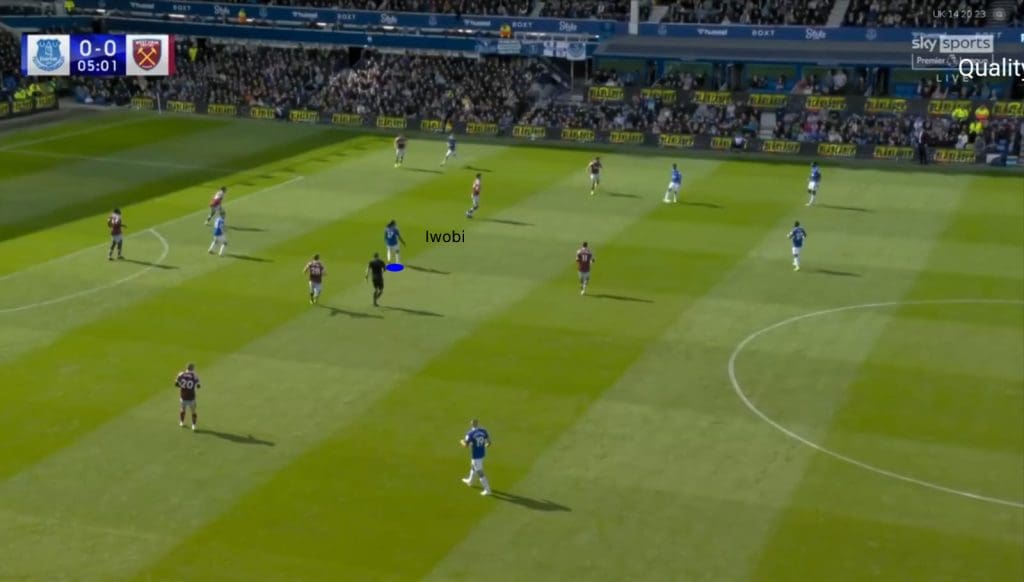 Once he distributes the ball, he quickly rushes to occupy the space left behind. Here, Antony Gordon drops deeper and Iwobi makes a run to the vacated space. 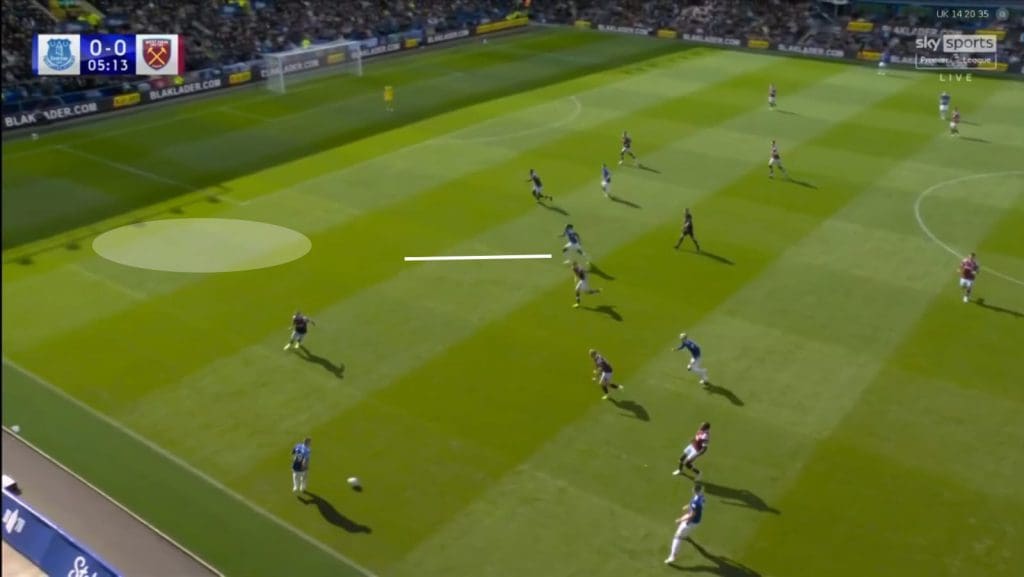 The positional rotation on Everton’s left flank is also notable under Lampard. In the passage of play below, Iwobi drops as a left back, allowing Mykolenko to push high and wide. The former Arsenal man opens up his body, carries the ball, and finds Maupay in space as Everton quickly progresses the ball from midfield to the forward areas with one pass from Iwobi. The Toffees also tend to build up from the left side to drag their opponents and switch to the right with fullback Nathan Patterson in acres of space to receive.

Iwobi has always been a hard worker out of possession but has certainly been mis-profiled by the looks of it. His industry in midfield combined with his ability on the ball and close control is something Everton have been craving for a long time. Yes, he is a very good player. But even more important than the stats are what he means to the team, not just on the pitch but off it too. Iwobi is a charismatic player and a significant leader, who brings joy to everyone connected with the club. He’s tailor-made for Everton – both now and in the future.

Onana, Iwobi, and Gueye started together for the first time vs West Ham United and it was clear the balance in midfield was close to perfect. Iwobi was allowed the freedom to drop deep, drift centrally, or to the right side while Onana was occupying the right half-space higher up the pitch. Gueye, meanwhile, held the fort in a number 6 role and acted as the link between defense and attack.

However, their shape out of possession was impressive and troubled West Ham. Onana and Iwobi tightly marked the Hammers’ double pivot Rice and Soucek. This meant that the center halves had to play the ball wide, and that was the trigger for Everton to become compact and push high. The home side’s man-marking in midfield was significant to stop West Ham from progressing the ball. 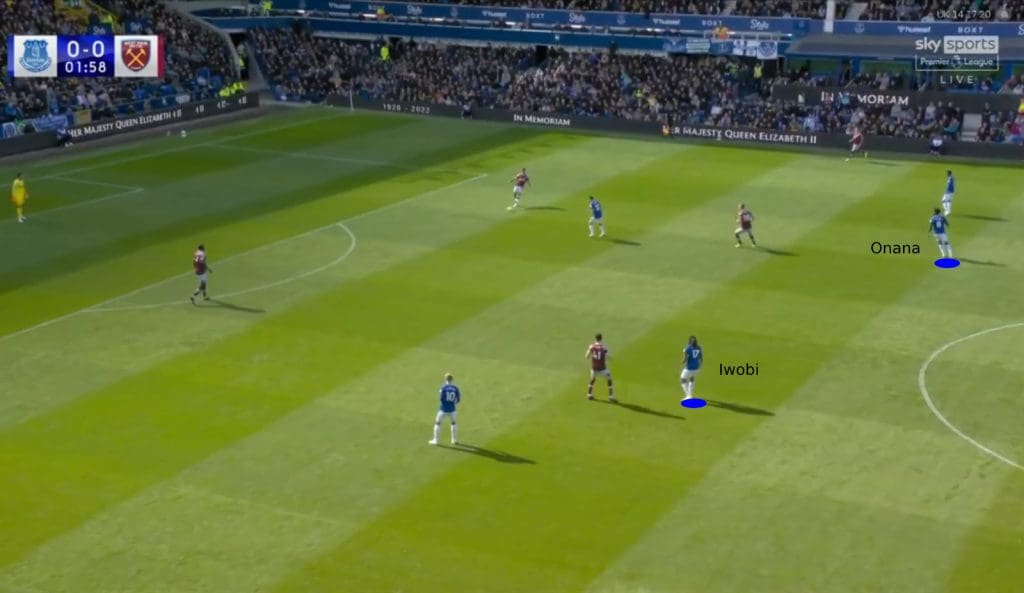 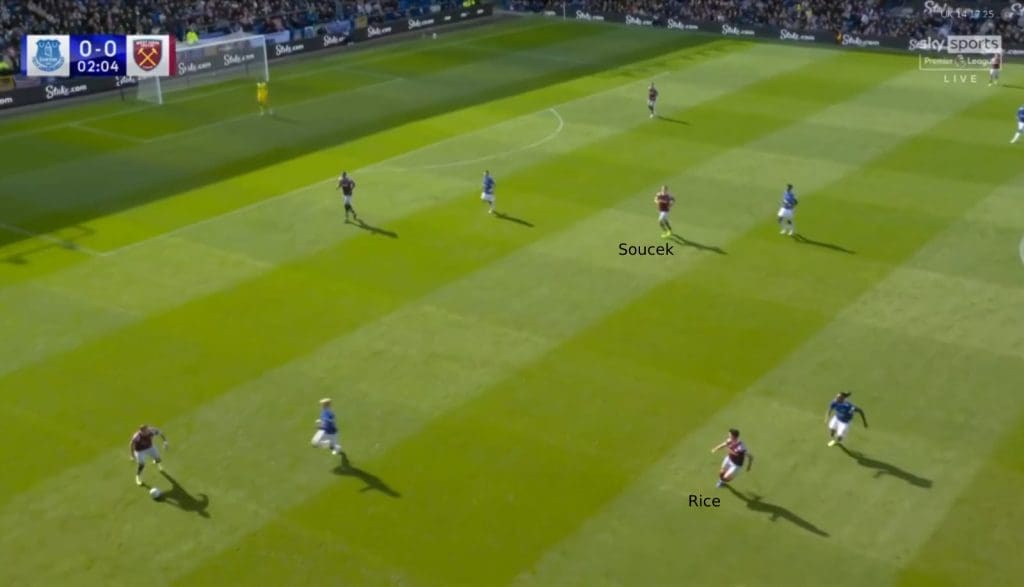 Everton also settled in a similar 4-5-1 shape against their Merseyside rivals Liverpool. Gueye did not start as Onana took his position while Davies played from the right side and Iwobi from the left. 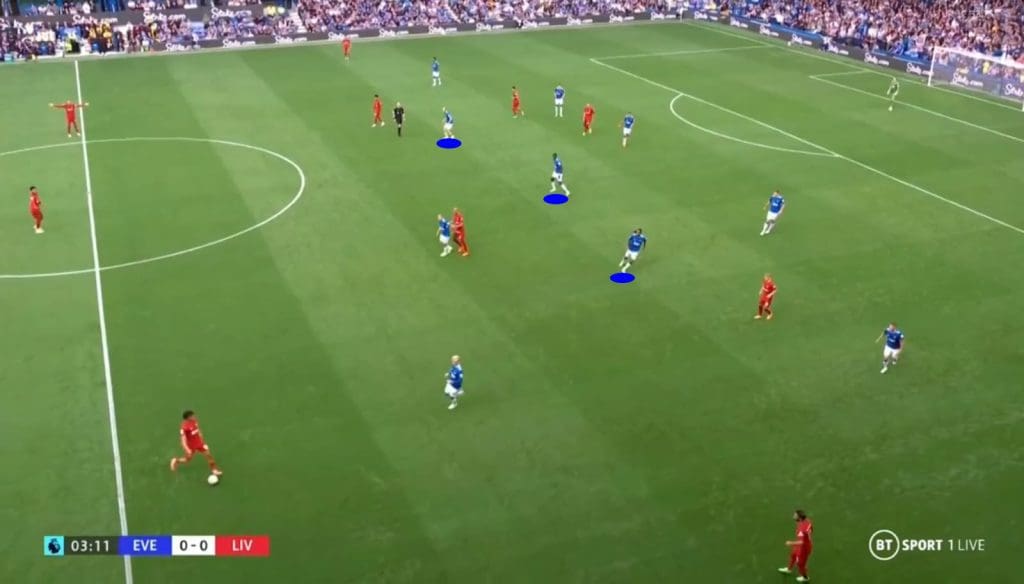 Their ability to stop Liverpool’s play out from the back, especially in the early part of the game, was effective. In this situation, Maupay starts the press, but Van Dijk spots Fabinho, who was free. However, Iwobi (number 17) leaves his position and immediately jumps on him, which results in a back pass. The Everton man continues his press as Liverpool were forced wide and eventually lose the ball. Notice that Onana (defensive midfielder) covers Iwobi’s position in marking Harvey Elliot when the Nigerian pushes forward.

Lampard has instilled certain pressing triggers and improved Everton’s organization throughout the pitch. Further, the three midfielders – Iwobi, Onana, and Gueye, read the play very well and are hardworking, which are unquestionably exceptional assets to have in a squad.

In possession, as mentioned above, Alex Iwobi has the license to drop deeper and dictate the play. Amadou Onana, who has played as a double pivot in the past, has been given the freedom to push forward and attack the box. Everton’s two fullbacks usually hold the width while the wingers occupy the half spaces.

Here is a situation against West Ham that sums this up. With Iwobi on the ball, Mykolenko stays wider with Gray in the half-spaces. Maupay also regularly drops into the little pockets to create a central overload. As Iwobi makes the line-breaking pass, Gray now has the time and space to switch the ball to Patterson on the other side and Everton attack the box with four men. (Gordon, Maupay, Gray, and the 6 feet 5 Onana)

But the role of the three midfielders is perfectly captured when Maupay scored the decisive goal against West Ham. Gana Gueye escapes his marker (Antonio) and occupies the space in midfield. Due to a combination of poor pressing from West Ham and clever positioning from Gueye, Everton move up the pitch. 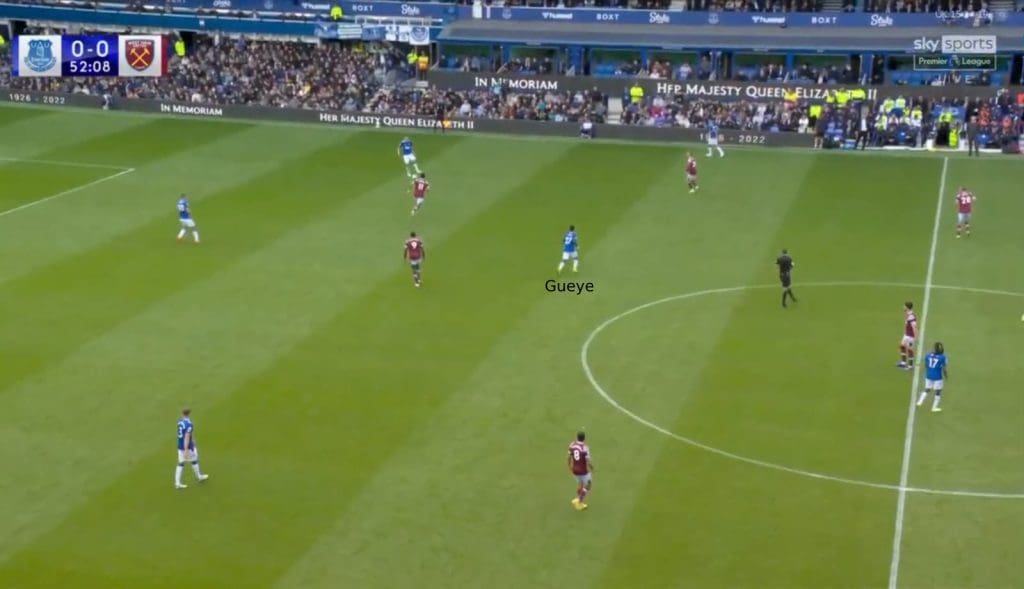 Gueye carries it forward as Iwobi and Onana switched their positions. The former drops deeper to collect the ball and carry it forward. Onana, in the meantime, occupies the half space, therefore attracting West Ham’s right back (Coufal) which provides the space for Gray to receive the ball in the wide areas. 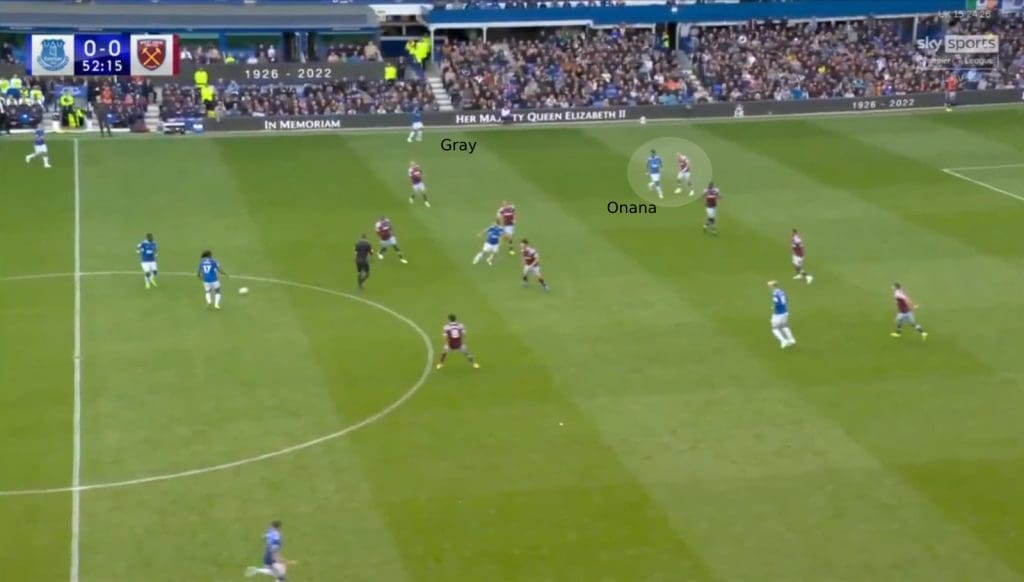 As Gray has the ball, Iwobi, since he is given a free role, finds the space and immediately moves blindside of his marker. Once he receives the pass, he carries it forward and quickly releases Maupay, who blasted it into the net, giving Everton the much-deserved lead. 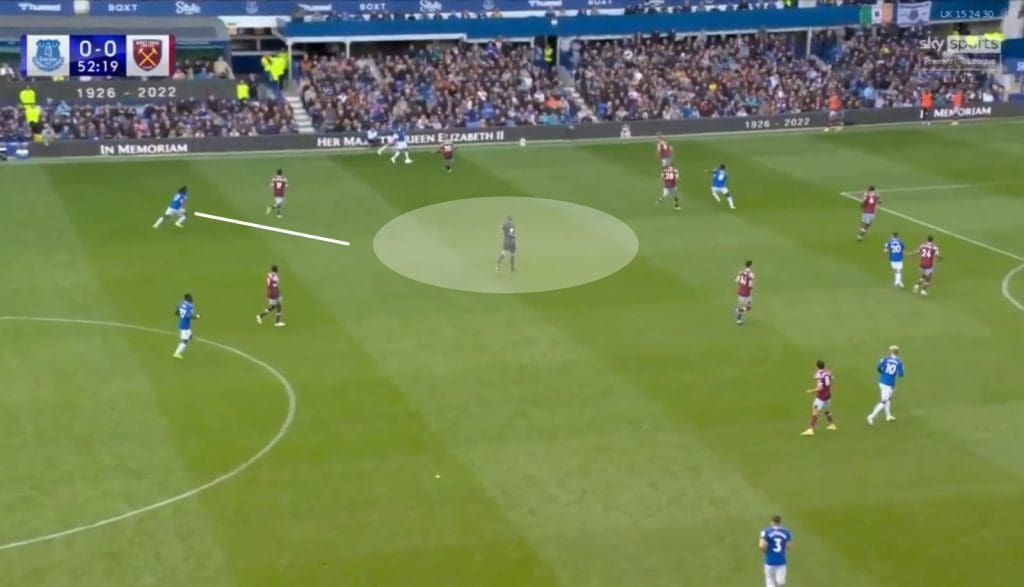 Of course, the three players have only played one game together, so the sample size is small. Nevertheless, the impact they had both in offense and defense will please Lampard. Midfield stability is an essence for clubs looking to aspire high and Everton, after years of looking for the treasure, are close to finding one. Amadou Onana – the Belgian is one of the hottest prospects in Europe and has the potential to be a complete midfielder. Gueye, in his second spell at Everton, brings the experience and calmness in midfield while Alex Iwobi is undoubtedly proving to be the heart of the team.

With Frank Lampard at the helm, Everton also have the right man at the top in developing talents. There is a long way to go and still work to be done. But we are seeing the first tentative signs that the Toffees are getting back on track. After years of dark clouds sweeping across the Goodison, the light is slowly creeping back into the avenue as hope and optimism are gradually on the rise in these parts. 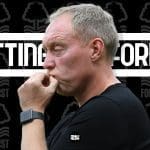 Where is it all going wrong for Nottingham Forest?
Next Article 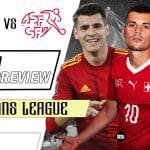