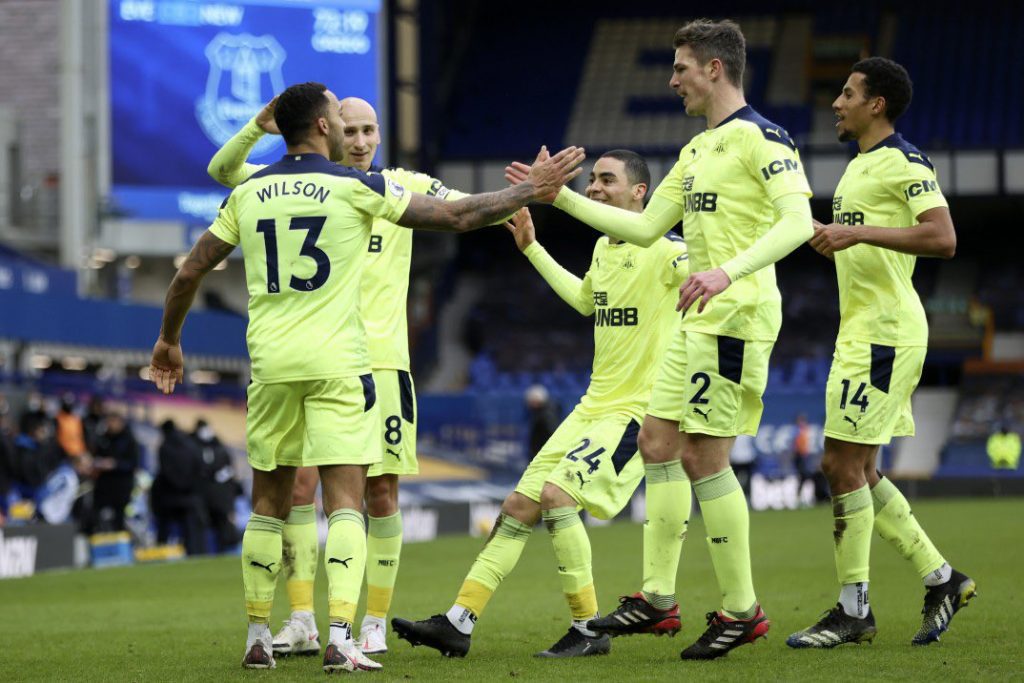 Newcastle United put up a terrific performance at Goodison Park to beat Everton 2-0. Callum Wilson’s brace was enough for the Magpies to get all three points away from home.

The lads put a spirited displaying graft, grit, and aggression about their performance. It was a much-needed win for Steve Bruce who was under fire for the long rot Newcastle are in.

Callum Wilson was again sensational on the day but unlike previous games, he had plenty of service against Everton. He did miss a couple of great chances but didn’t hang down his boots and sniffed around the goal more for an opening.

In the 73rd minute, he executed a brilliant header from a flat Shelvey’s corner. He showed no signs of tiredness in his legs which was evident when he covered the whole ground to get on the end of Lewis cross to score his 100th career goal in the stoppage time.

If we talk about the tactics, when I saw the lineup I said to myself it’s again that boring 5-3-2 and Newcastle will sit deep to defend and try to get a smash and grab the win. On the other hand, Everton under Carlo played decent free-flowing football with James Rodriguez at the centre of everything.

On the contradictory, it was the visitors who were pressing high and in numbers. And they created a few decent chances in the first half without any fruition.

It looked like Newcastle changed their setup in the second half, shifting to 4-3-3 but not making a big bang about it as we all know Ancelloti is a reactionary coach. But the Toons reverted back to sitting deep and hitting Toffees on the counters and set pieces but in a diamond shape. This proved to be effective as they created multiple high-quality chances in the second half which eventually lead to goals.

There is also a sense that Newcastle overloaded the right side with Wilson drifting towards that side frequently in the second half. Manquillo and Miggy enjoyed playing on that side. Manquillo kept Digne quiet for the most part of the game also pumping up and down. Lewis had an excellent game, solid defensively and very good going forwards put up an excellent cross for his assist.

Everyone nudged about what to do

The Fraser and Wilson link was visible in the first half. Almiron ran ragged Everton in the ten roles again putting up decent defensive numbers (4 tackles and interceptions).

Newcastle were solid defensively with Schar and Lascelles shutting down the shop at the back. James was taken care of by Hayden, who was again excellent in the defensive midfielder role. Hendrick had a good game completed a couple of tackles and graft in the match. Shelvey came close to scoring when his shot was deflected. He was proactive in the attack, was sharp, and made the team tick with his distribution. Also, Steve Bruce’s looked more composed and purposeful as the game went on.

Newcastle fans enjoyed the game thoroughly and it looked like players also enjoyed playing more positively. Players celebrated and in jubilation afterward which in contrast to the scene after the Villa game when players looked dejected.

The performance in this match is all that Newcastle’s faithful were looking for: being proactive, positive, energetic, on the front foot, grit and the desire of players.

Credit to Graeme Jones and the players. It can’t be a mere coincidence that this proactive display came after his arrival. He can be seen animated on the touchline barking instructions to the players.