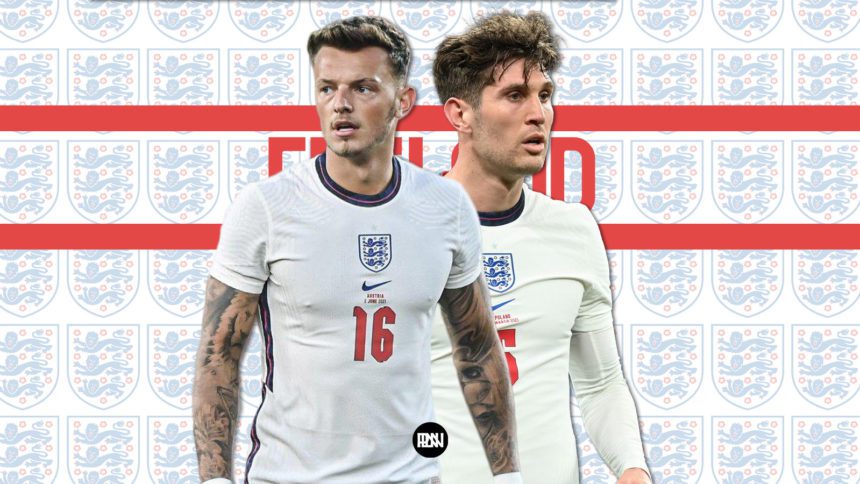 As footballers trade their club jerseys for their countries, there is a ring of expectation around the world as the FIFA World Cup is all set to begin this week. Speaking of expectations, the England fans will certainly hope that the coveted silverware will finally arrive home. Gareth Southgate has been etching for success since his appointment in 2016, but the Three Lions seem to falter at the final stage. However, with a squad boasting talents all over the pitch, England are one of the favorites going into the tournament.

With that being said, Southgate’s side have struggled for form in the past year. Despite trying various solutions – playing with a back four, playing with a back five with wingbacks high up the pitch, and player rotations, their recent performances against Hungary, Italy, and Germany have not hit the mark.

The talent England possesses is astonishing, but the manager needs to find the right balance, which seems to be a problem at the moment. This article describes England’s issues in their back-five set up in the past few games and how Southgate can get the best out of his players.

England’s troubles – Out of possession

During his tenure as England manager, Southgate has opted for a back five against bigger nations and teams who like to have possession. So, England opting for a back five against Germany was not a surprise. England lined up in a 5-2-3 shape with Harry Kane, Raheem Sterling, and Phil Foden as the front three, with Declan Rice and Jude Bellingham as the double pivots. Germany under Hansi Flick hold a high line and with the likes of Ilkay Gundogan and Joshua Kimmich, the midfield is one of the most technically secure in the world.

England did not look to press Germany high, but rather defended in a mid-block and waited for the opportunity on the transition. However, they constantly got overloaded centrally as Germany’s midfield moved the ball with precision and controlled the game from minute one. The problem started from the front as the front three did not look to close down the space for Germany’s midfielders (Gundogan and Kimmich). In the below sequence, Kane lets center-back Schlotterbeck carry the ball into the space with no challenge. 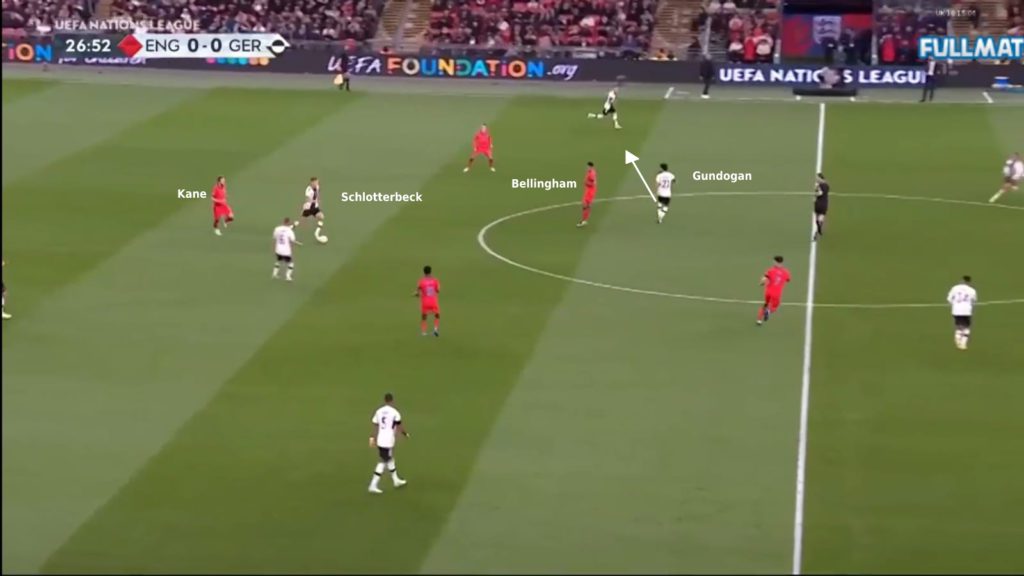 As Schlotterbeck carries the ball, Gundogan drags Bellingham to the left, which in turn creates the space in the middle of the pitch. And now the England center-backs jockey backward and hence Sane receives the ball centrally and turns with ease. 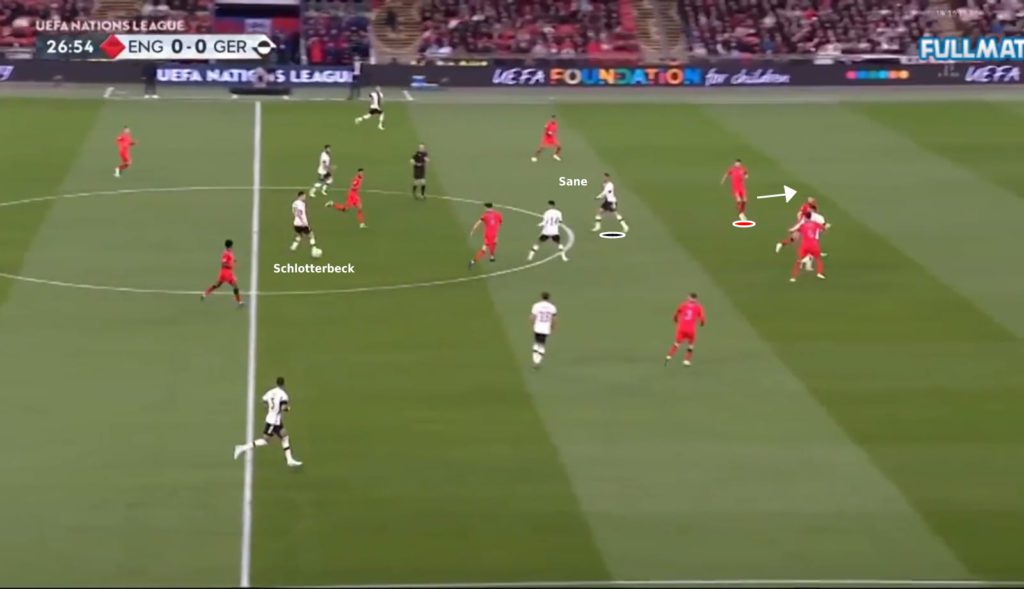 When England set up in a 5-4-1 block, Germany looked to create a 3v2 numerical superiority in midfield. Here, as Bellingham vacates his positions and looks to limit the time for Gundogan, England’s wide center-back (Stones) should progress to the half-space to get tight on Sane. 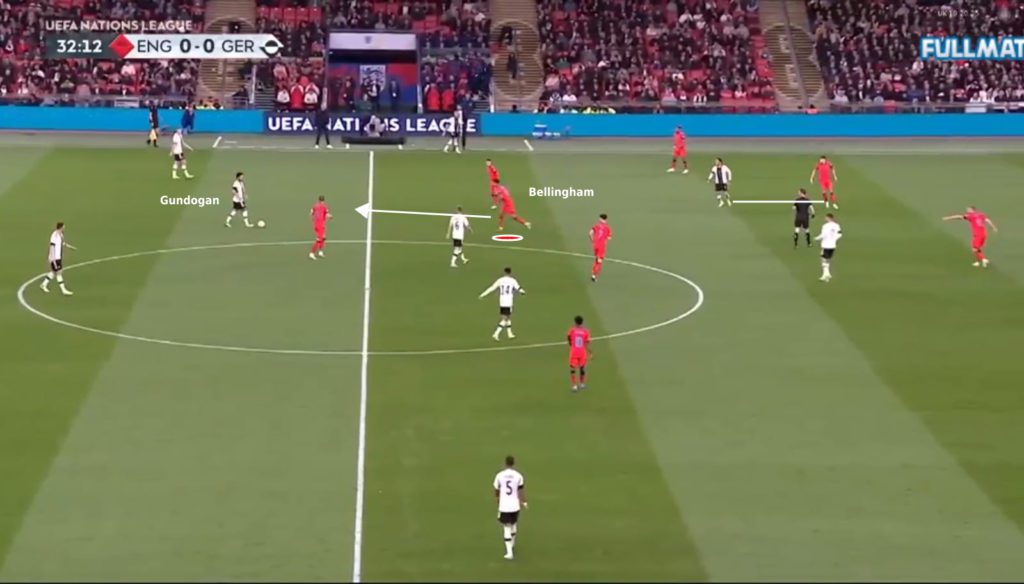 But once again, Stones does not engage with the midfielder and lets Sane receive the ball on the turn and run at him. This could be a huge problem for England as possession-based teams can progress through England’s double pivot with relative ease if the center-backs do not get tight in the half-spaces. 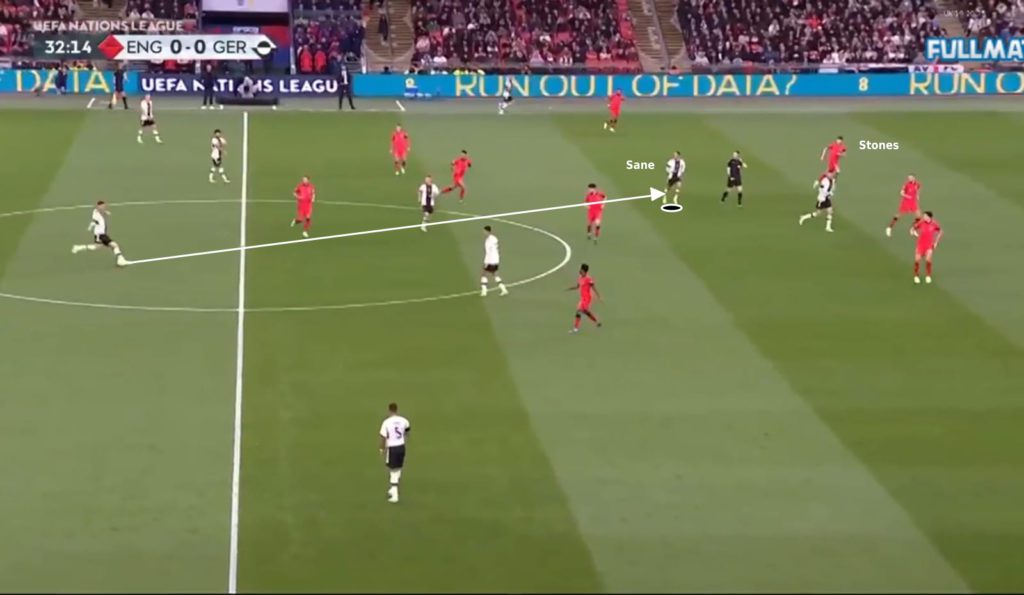 Here is another situation where there is no pressure in the first line and Kimmich receives the ball on the half-turn. Gundogan moves forward to create a 3v2 in midfield as Kimmich progresses the ball effortlessly. This then creates a wide overload as the left wing-back can cross into the box with no pressure. 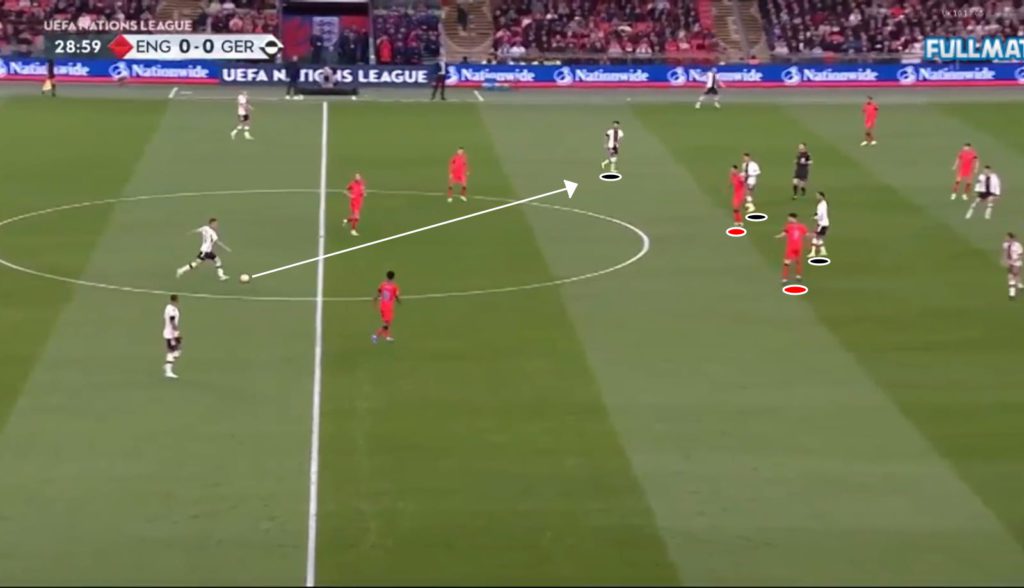 This issue was repetitive against Italy as well. Southgate has a lot to work on, especially on the communication between the midfielders and the wide center-backs to close the player in the half-spaces. Ben White has been immense for Arsenal and could slot into the right center-back role if England opt to play a back five. Although his starting position is right back at the club level, his role under Arteta is to play as a third center-back and he could be the aggressor that England desperately needs. The likes of John Stones and Eric Dier can play as a wide center-back but are more comfortable centrally. Southgate certainly has a decision on his hands.

England appear to play out from the back to lure their opponents before using the ability of their front three. However, in the last two games, they struggled to bypass the first press. Part of the reason is Harry Maguire’s poor form and his low confidence. Despite his struggles, England will depend on Maguire as he is one of the best progressors through ball carrying.

England’s progression from the back was once again non-existent against Italy. Roberto Mancini played a 5-3-2 against England’s 5-2-3 and went man for man in the press, but that meant that the Three Lions had a spare man at the back. This meant that the ball-sided central midfielder vacated his space to press the extra man, but England failed to utilize this to their advantage.

Italy covered Jude Bellingham and Declan Rice with relative ease, as they did not use utilize the space left behind the midfielder and usually dropped deep as a pivot. 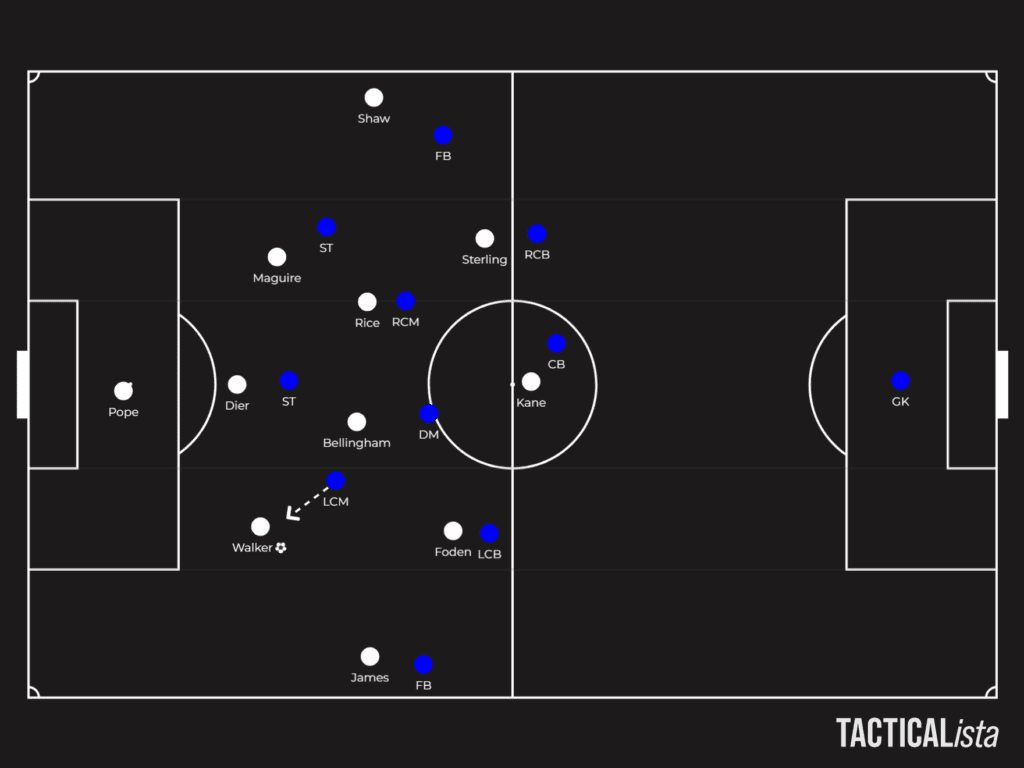 Even when Bellingham moved to the blindside of his marker, Jorginho – the defensive midfielder, was able to win the ball and start Italy’s attack. Unlike England’s wide center-backs, Italy’s center-backs were also tight on England’s interiors (Foden and Sterling). Hence, they struggled to move the ball with precision and relied on Foden dropping deep to progress the play.

What England could have done better is pushing Bellingham forward since there was a 3v2 overload in the first line. And if Italy’s ball-sided midfielder pushed forward to press Walker, Bellingham, Foden and James would create numerical superiority on the right. With all fairness, England moved to this shape after the first few minutes but struggled to string passes together from the back. 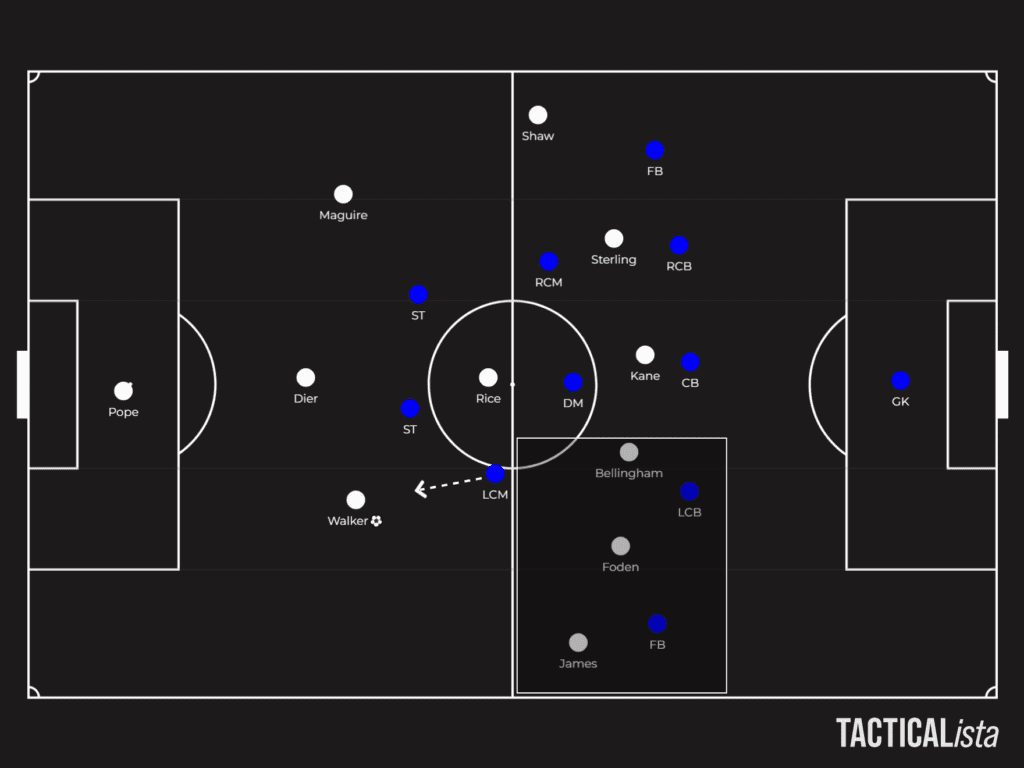 If Southgate starts with a back three, Ben White is tailormade for this role at least until Kyle Walker returns from injury. England have their problems defensively and offensively that could not be showcased in the group stages, but it could expose them during the knockouts against bigger teams. However, the England manager’s approach has served them well in major tournaments, and it will be interesting to see his strategy, especially in the knockout stages of the competition. 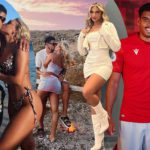 Will this finally be Lionel Messi’s time to lift the World Cup?
Leave a comment