Arsenal goalkeeper Emiliano Martinez has claimed the centre-back pairing of David Luiz and Shkodran Mustafi makes him feel safe, despite criticism the pair have faced this season.

The pair are noted for their high-profile injuries in the past but seem to have become a bit better under the management of Mikel Arteta.

Their improvement was shown in Saturday’s 2-0 win over Wolverhampton Wanderers, when a back three of Luiz, Mustafi and Sead Kolasinac restricted the Wolves attack to just one shot on target at the Molineux.

“Now, we have structure, we have a gameplan, we have game management and the defence looks stronger and stronger,” Martinez told Sky Sports. “Believe me, David and Musti are top players. David has been at the top for so many years and it’s the same with Musti. Sometimes when you make mistakes at big clubs you get punished. With Arsenal, people always seem to blame the defence for defeats. But I feel really safe behind them.

“They have experience and they are constantly talking through the whole game. When you play behind them, it’s not like what people say. It’s not, ‘Oh, they make mistakes, they don’t know how to play football’. 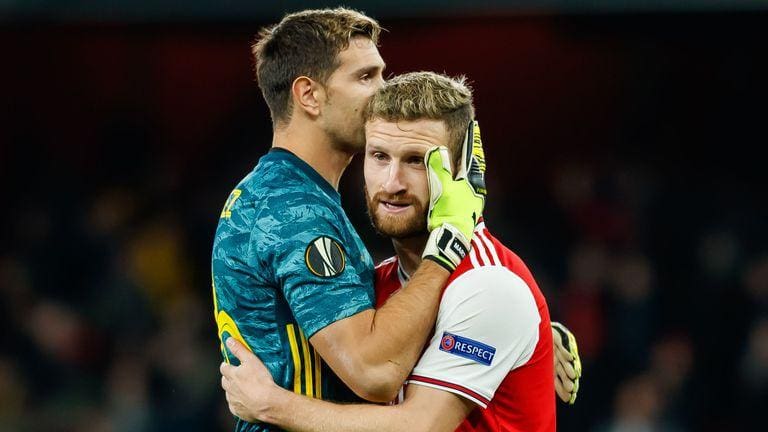 “I feel really safe, and now that we’ve kept three clean sheets on the bounce in the Premier League, people are starting to say that the defence is actually solid.”

Despite being a long way off what he wants to build at the Emirates Stadium, Arteta is showing promising signs of what he could bring to the team in the long run. And the Gunners shot-stopper said he and his colleagues are really impressed with the boss’ progress so far.

“We knew Mikel would be a good manager when he signed here, but we didn’t know he would be this good,” Emi continued. “He is incredible. He knows how to deal with experienced players, with young players. He gives us a gameplan against anybody and gives us hope when we do the training sessions.

“He knows what position you have to be in in every department, whether you are a goalkeeper, a striker or a left-winger.

“And then, when we go into the games, those scenarios we worked on in training actually happen, so we start believing in every word that he says.”