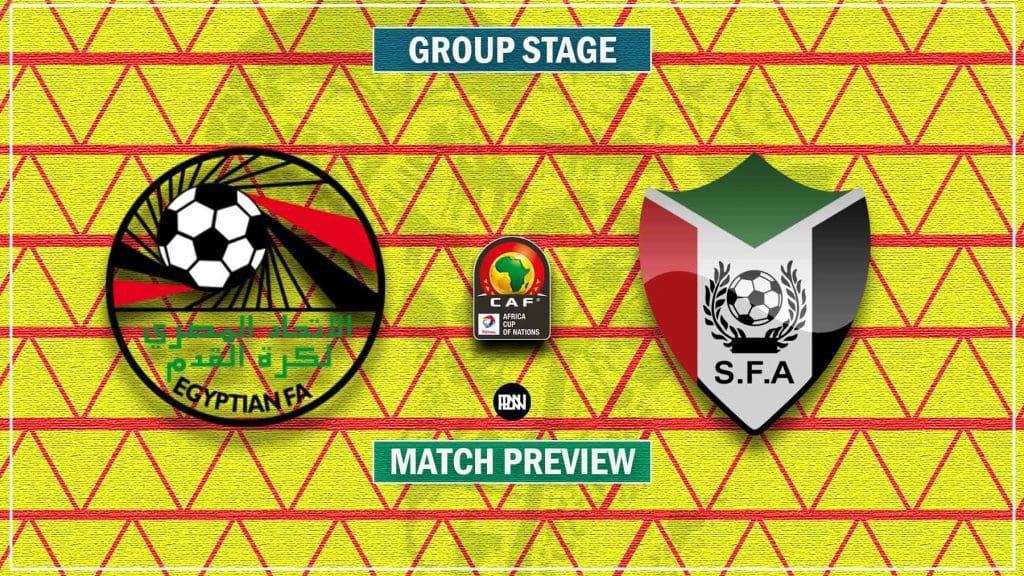 Egypt take on Sudan in the final round of Group D games in Afcon 2021 and Premier league News Now brings you all you need to know ahead of this mouth-watering fixture. A win for either team would guarantee a place in the knockout stages and this game will present us nothing but hunger, drive, quality and entertainment in all its endeavours.

Egypt approach this game vs Sudan in second place in the standings in Group D. A win or a draw could be enough to cross over into the knockout stages of the competition. Egyptian skipper Mohammed Salah opened his scoring account in the tournament against Guinea Bissau as Egypt held onto all three points after a disallowed goal for Guinea Bissau in the closing stages of the game.

Sudan on the other hand lie bottom of the table with just one point from two games and desperately need a win to guarantee qualification to the next round of the competition.

Egyptian skipper Mohamed Salah will look to find the back of the net once again in this upcoming fixture to help Egypt earn a place on the next round of the competition.

Mohamed Elneny will continue in midfield with both homemade midfielders Abdallah El Said and Amr Al Sulaya to aid Egypt’s control of the pace of the game.

For Sudan, Salaheldin Nemir was a forced substitute after he picked up a late injury in the game against Nigeria and the Al-Merrikh defender is a doubt for the Falcons of Jediane.

Meanwhile, Musab Eisa failed to make his mark against Nigeria last time out, where he was taken off at halftime, and the 28-year-old could drop to the Sudan bench.

Egyptian Coach Carlos Queiroz must now lead his team to a victory or avoid defeat on Wednesday to ensure their place in the round of 16, where they were eliminated three years ago in their 1-0 defeat to South Africa. They need to get the game right and avoid getting behind against Sudan from setpiece or interplay.

Egyptian center-back Ahmed Hegazi will be absolutely vital for them as he has controlled the backline in the first two games. A threat from setpieces and a tough defender to get past, Hegazi has been the heart of the Egyptian defence.

In midfield, Arsenal’s Mohammed Elneny will look to control the game as he did in the previous fixture against Guinea Bissau. It is absolutely clear that Egypt are a team that like to have the ball, work it out and create goal-scoring chances but this has not been the case in this edition of the African Cup of Nations. They have struggled to create clear cut chances and have been quite unfortunate after they hit the post three times in their previous game. This indicates that their finishing touch has to improve if they want to advance and go all out in this competition.

Egypt struck 18 shots with just 4 of them on target and although they controlled possession, they fouled the Djurtus’ 18 times in the game. A setpiece could be crucial for Sudan who need all three points. In attack, Mohammed Salah and Marmoush will look to find the back of the net to earn Egypt the much-needed victory.

For Sudan, they suffered 17 shots against Nigeria and had just two of their shots on target with one of those as a penalty. To earn all three points against Egypt, they will have to improve their finishing touch and create more opportunities to score. Their squad overhaul is crucial to their disappointing start but the Secretary birds will look to bounce back against with a victory against the Pharaohs of Egypt.

The secretary birds have no win in 12 consecutive games with 4 draws and eight defeats and it is likely that that will be the case on Wednesday evening in Yaounde.

After a 3-1 defeat to Nigeria, 1970 winners play it all out for a victory to avoid elimination from the early stages of the competition.

The Egyptian king. A well-placed volley with his left foot against in the 69th minute saw Egypt cling onto all three points against Guinea Bissau. A player on the form of his life, Salah was kept at bay for the most part of the game against Nigeria but a goal against the Djurtus has uplifted his confidence and he will look to find the back of the net yet again on Wednesday. The Liverpool winger is still the Premier League top scorer despite leaving for the Afcon earlier this month. Still a player of the tournament and top scorer contender depending on how further Egypt reach in this tournament. A hattrick in the final game which rather looks unlikely but is quite possible or a brace will be enough to get him back into the top scorer lists as Vincent Aboubakar strifes forward on top with five goals in the competition.