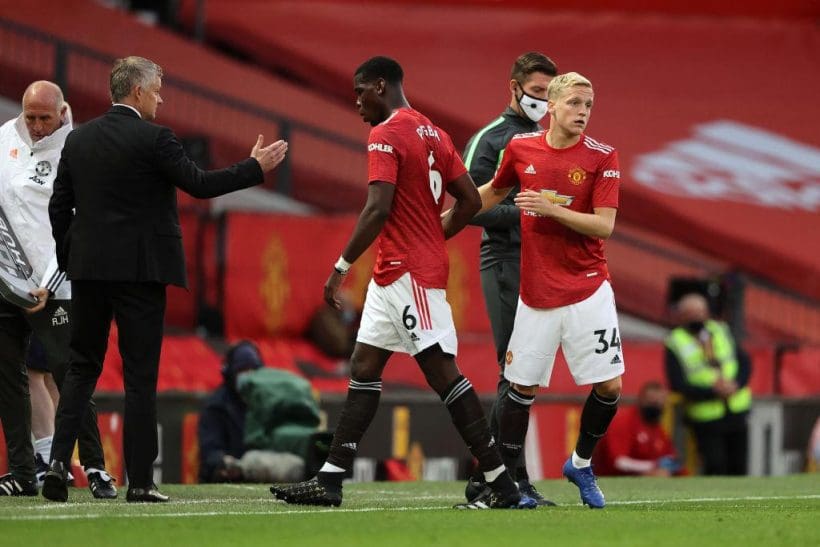 Manchester United are off to an awful start to this campaign, not in terms of results which have been in their favor but in terms of the way that United have been playing. After an opening day defeat at Home to Crystal Palace the Reds then Narrowly edged out Brighton in very bizarre circumstances where they were awarded a penalty seemingly after the full time whistle.

Although they did get the result in the Brighton game a lot of United fans were left frustrated with the performance of the players. It was nowhere close to their form towards the end of last campaign where they picked up more points than any other team and pushed their way past Chelsea into third place. Ole has been quick to defend his players, saying they haven’t had the chance to get back to full match fitness, and that they haven’t played enough pre-season games and that it will take the players a bit of time to get back to their best.

One player that has been under the microscope at Old Trafford for quite some time now has been Paul Pogba, the 27-year old has been facing a lot of criticism since his return to the club. With pundits and fans alike saying that he has looked lethargic and hasn’t looked like he can change the game for them. And that criticism has carried on to this season and seems justified at the moment. Pogba had failed to make an impact in both the Premier league games that he has featured in.

New acquisition Donny van de Beek watched from the stands for both of those fixtures and was only brought on as a substitute in both the games while Pogba struggled to make any sort of impact. When van de Beek was brought on, he seemed to make an instant impact scoring United’s only goal on his debut in their Loss to Crystal Palace, he was also instrumental in keeping on the pressure against Brighton which ultimately led to United scoring. From those performances it is clear that van de Beek is Match fit, and in better form than Paul Pogba.

So far Solskjear has trusted the trio that worked for him so well last season in Pogba, Fernandes and Matic. But after a sluggish start to this season should the United Manager consider Dropping Pogba and starting the Dutchman?.

In both fixtures, Pogba seemed the weakest link of United’s midfield. He had a pass success rate of 73.5 percent, a number which dropped lower against Brighton (67.6%), where he lost possession 15 times – more than anyone else in the team. There is a case to be made however that Pogba has been starting because he can contribute more defensively than van de Beek, these claims lack any concrete proof however as Pogba hasn’t made an impact defensively, He has only made one tackle so far and lost over half of his duels in midfield.

In both their games this season Ole has started the game with a 4-2-3-1 formation, with Pogba playing a double pivot alongside either McTominay or Matic. He has been inefficient in that role so far, sitting deep and only moving the play along from side-to-side with the occasional long diagonal to switch play. It was a pretty bleak attack from United, Bruno Fernandes had to do all the running, and Matic looked to be alone in the middle of the park. If van de Beek starts he will flourish in this system, he is someone who can press the opposition and force out errors high up the pitch and he can also make challenges going back when teams are on the break against Manchester United.

The Dutch international can also run the midfield and play as a box to box midfielder which is what the Red Devils seem to lack against Crystal Palace. He also has an eye for a pass and he can link up play with Fernandes in midfield and the both of them can supply the runners ahead of them, it will also give the United Full-backs an opportunity to burst forward and overload in wide areas when teams sit deep against them.

Pogba’s poor form can be put down to the fact that he hadn’t had a lot of time to train with the squad after he tested positive for Covid and had to be in isolation. It can be said that this is the right time to drop him and give someone else a chance and allow Paul Pogba to get back to fitness and find his form again.

Donny van de Beek already looks like a great addition and the young midfielder will get more game time as the season progresses but many fans want to see him start for United right away.

Barkley moves to Aston Villa, should Ruben be the next to move out?
Manchester United can suffer problems like Leeds United if the current owners continue
To Top