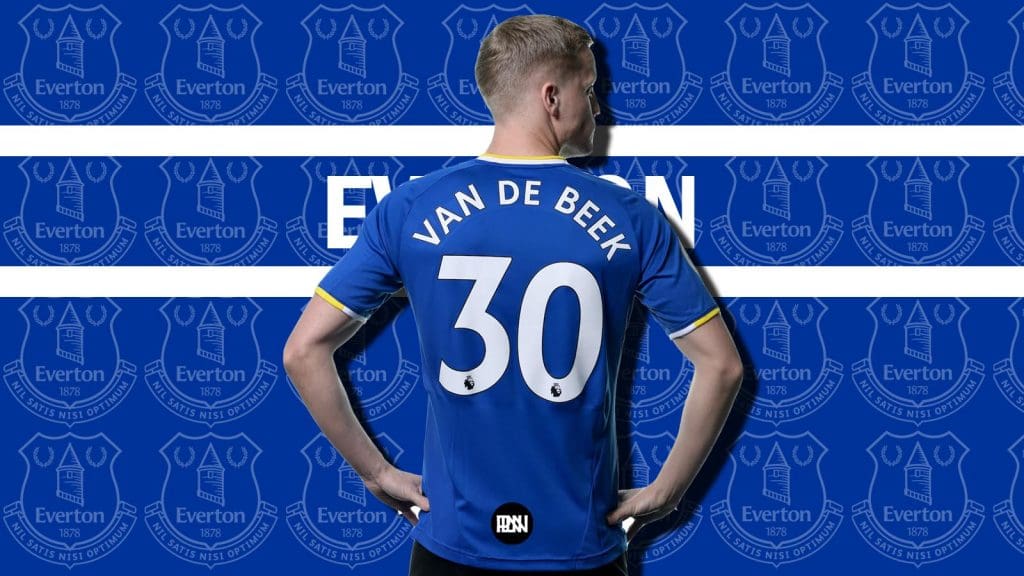 Donny van de Beek is joining Everton, on loan from Manchester United for the rest of the season. The newly appointed manager, Frank Lampard, played a big role in convincing Van de Beek into signing the deal.

So, Van de Beek is finally getting a chance to prove his worth. It could get very emotional for the young Dutch midfielder. For nearly 2 years, since his move to Old Trafford, he had to fight for his place in the starting XI.

Although, prior to his move to the English club. He was considered a revelation at Ajax. Van de Beek was one of the few players, who moved following the Dutch club’s scintillating show of performance in the Champion’s League, in the 2018/19 season.

If we go back in time, 14 years from now, a young boy caught the eye of Ajax while playing at his local academy at Veensche Boys. 10 years old, then, Donny van de Beek joined the Ajax academy in 2008. With his rapid rise through the ranks at the academy, he surprised everyone.

In 2014, he was moved to play in the club’s U19s setup, and then soon after in the U21s setup as well. Donny was just 16 back then. With persistence and constant hard work, comes success. And it did come knocking for Donny as well.

In 2015, the young midfielder made his senior debut for the club in the 2-1 victory in a Europa League matchup against Celtic, at the age of 18 years and seven months. Although, he was not a regular in the first-team squad for de Godenzonen. The youngster made a solid impact whenever he was called upon by his manager. Soon becoming, the newly appointed manager, Erik Ten Hag’s favourite young star.

It was in the season 2017/18 that Donny showed his prowess. The young midfielder seamlessly made his place in the squad. He filled the void left by Klaasen like the star player never left. Van de Beek went on to make 39 appearances across all competitions that season, scoring 13 goals and assisting his teammates with another 6. It was in the same season he was called by the Dutch National side, as well.

However, the telling point of Donny van de Beek’s career has to be the 2018/19 season. The youngster was part of an Ajax team that had one of the best Champions League run in ages. Reaching the Semi-final of the mega, European football competition. Alongside, his then teammate, Frenkie De Jong in the midfield, Donny made an amazing partnership with him.  With latter finished the season on a high – 17 goals and 13 assists from 57 games in all competitions, including the 3 goals he scored in the Champions League.

In hindsight, a move to Manchester United was not the worse, for Donny, given the history of the club. But sadly enough for the young superstar, it has proved elsewise, over the period of 2 years.

While the likes of Ziyech, De Ligt and De Jong (his teammates at Ajax) are faring well at their new clubs. Donny had to fight for his place in the first team, since his arrival at Old Trafford. “He is good enough for Real Madrid” – the words of his former teammate, Frenkie De Jong might never fade away. Given the fact, he has just become a mere reflection of his prolific past.

However, in Van de Beek’s defence, he has not been given enough playtime, and rightly so. For a player bought for a whopping £35million, Manchester United have not justified the signing on their behalf by giving the player a chance to prove his worth. Arguably, he scored in his debut for the Red Devils against Crystal Palace. The joy was only short-lived, as Ole him benched in the proceeding game.

The fact that a potential goal-getter and a force to be reckoned with in midfield is being seen as a backup option. It was all starting to make sense. A fall from grace, indeed for a rising superstar.

Even a change of manager did not bring any luck for the 24-year-old Dutch midfielder. A picture of Van de Beek, sinking in his chair due to lack of game time, went viral. Well, that has been his career at Manchester United, defined, in a single frame.

A shot at redemption?

Donny, however, has got a shot to prove his worth. Not only to the upcoming manager at Old Trafford but also to the fans on what they have been missing out on.

A new appointment for the head coach, at Everton, means new faces. As the Evertonians revealed Frank Lampard as their new manager. The ex-Chelsea player & coach has been in awe of Van de Beek, ever since his rise at Ajax. No wonder the Dutch is joining the former midfielder himself, on a short term loan for the rest of the season, from the Red Devils.

“For every dark night, there is a brighter day” – Donny needs to make the most of the opportunities, that come in his way during his short spell ahead with the Toffees. Given Lampard’s admiration of him, Van de Beek could expect a lot of first-team experience at Goodison Park.

Everyone knows his abilities. Donny van de Beek is as versatile, as you can ask a midfielder to be. Can play through the middle. As an attacking mid. From left or right. And can help his side defensively, as a box-to-box midfielder. Despite all of these attributes, one that stands clear is that the midfielder from the great Dutch lands is a serial winner.

Goodison Park may not be the Bernabeu, Old Trafford, or the Johan Cruyff Arena, but if Donny van de Beek shares that same old spark and hunger he once had, Lampard’s Everton could very well be the location where he jumpstarts his career.