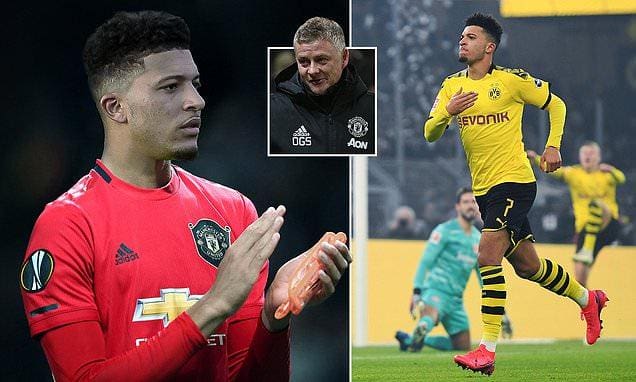 Dimitar Berbatov has revealed that Jadon Sancho potential arrival at Old Trafford would be an “amazing signing” for Manchester United but opined that the manager Ole Gunnar Solskjaer faces a tough task in making room for the 20-year-old.

Former United star Berbatov believes that considering the England international price tag, he won’t be pleased with a role on the bench nor being a bit-part player, which will in turn, affect the Red Devils’ current front trio comprising Mason Greenwood, Anthony Martial and Marcus Rashford. Either of the aforementioned trio will need to be dropped amid the potential incoming of the Dortmund star.

“Jadon Sancho would be an amazing signing for any team, United included,” Berbatov told Betfair. “It becomes a luxury problem to have so many attacking options, but it brings hard decisions. Someone has to be benched, and Ole will have to deliver that news to someone.

“Anthony Martial and Marcus Rashford are well established in world football, and Greenwood now deserves his chance to continue his progression, and I don’t want to see him stalled.

“We know United can afford to pay for Sancho and if it happens, the club will be happy, but it will also be tricky. Over £100m is a lot of money, especially now in the current situation, but I’m sure he will be worth it.”

Regardless of the possible confusion surrounding the team’s selection, Berbatov believes that United’s manager Ole Gunnar Solskjaer will be able to rotate the squad so as to keep his attackers happy.

“Everyone at United will be watching this transfer,” he said, speaking to Betfair. “Rashford will know Sancho better than most from playing for England, and they will welcome the competition, but the attacking players will have doubts in their mind now.

“Then, they will also use it as motivation, they’ll want to earn their spots in the team. If they pay a record fee for Sancho, no one expects the guy to sit on the bench, so at least at the start Sancho will be higher up the pecking order.

“Bear in mind, United had Ole, Dwight Yorke, Andy Cole, and Teddy Sheringham- plenty of attacking options, and Ole will think he can manage this fine.”

Though Manchester United might currently be facing a lot of challenges in agreeing a transfer fee with Borussia Dortmund but the greatest challenge seems to lie on how Ole Gunnar Solksjaer will rotate and manage his front line, not to affect Mason Greenwood’s development, coupled with Martial and Rashford’s impressive goalscoring form.