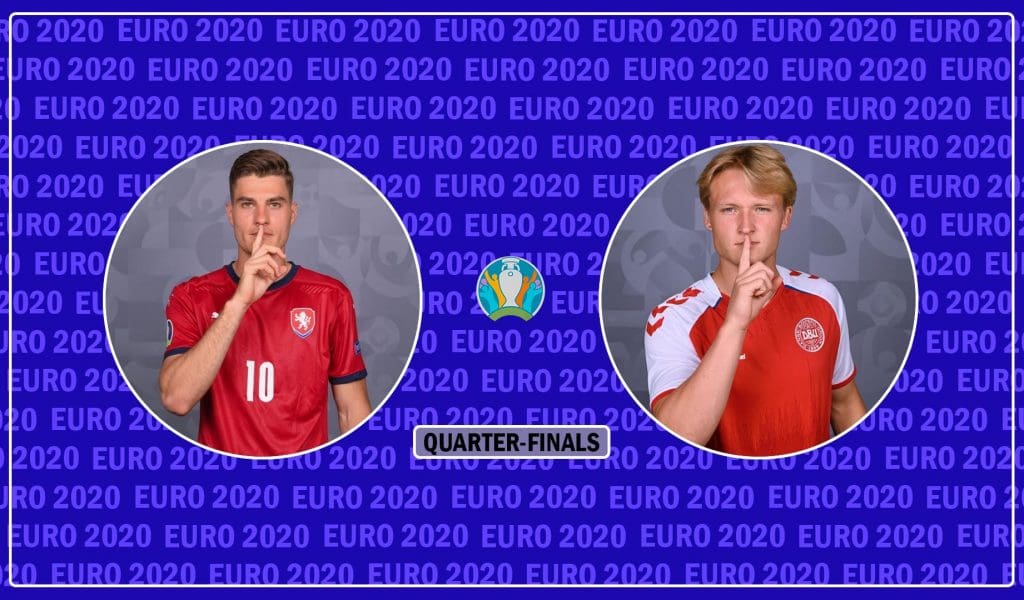 The unpredictability of Euro 2020 has been unbelievable, and it only increased when both Czech Republic and Denmark made it through to the last 8, but now only one of them will enter the semi-finals of this year’s tournament.

While Denmark thrashed Wales 4-0 to reach the quarter-final, Czech Republic defied the odds to defeat the Dutch 2-0 in a hard-fought affair.

COULD THE CZECH REPUBLIC CONTINUE ITS DREAM RUN?

Everybody considered the Czech Republic to be the real deal when they stood a chance to top their group that also had England and Croatia battling for that spot. However, they finished third but did enough to qualify for the Round of 16 and faced a daunting task against Group C winners, Netherlands.

Jaroslav Silhavy will have to ace his tactics on Saturday night when his side face Denmark, who are minor favourites to go through to the semi-final. While the defence has been solid and has only let in 2 goals in 4 games, they have been susceptible to dangerous crosses into the box, and keeper Tomas Vaclik will have to come out more often and handle such probing balls into the box. Tomas Soucek and Tomas Holes will be confirmed starters in the center of the park, and they will have to stop Denmark play between the lines, something Soucek also did with his club last season at West Ham.

Patrick Schik, who netted his fourth goal of the tournament in the Round of 16 game against the Netherlands will be hoping to create more glory for himself and his nation as his ruthless finishing is the greatest threat the Czech Republic carry in their arsenal. Silhavy knows about Denmark’s full-throttle opening 10 minutes, and his team will have to tough it out against them if they have any hope of qualifying for their first semi-final at the tournament since 2004.

Left-back Jan Boril, who was out for the game against the Dutch due to a suspension, will be available for selection again and will be hoping to reclaim a starting spot into the team. The rest of the squad is fit and ready to go for the last 8 game against the Danes on Saturday night.

CZECH REPUBLIC PLAYER TO WATCH OUT FOR VS DENMARK:

4 goals in 4 games– Patrick Schik has been in scintillating form for the Czechs at the Euros this year, and his incredible goal threat will be a huge problem for Denmark. Schik’s movement and awareness inside the box as well as during the build-up is brilliant, and he will have a huge part to play in the game on Saturday night and should the Czech Republic win the game, Schik will certainly be one of the players to deserve a lot of the plaudits.

COULD THE DANES GET TO THEIR FIRST SEMI-FINAL SINCE THEIR HEROICS IN 1992?

Ever since Christian Eriksen’s unfortunate incident in their first game of the tournament, Denmark have played with a relentless passion which has certainly paid off till now.

While most people expected the Round of 16 game against Wales to be a tight affair, the Danes were deserved winners as they carved open the Welsh defence. Denmark coach, Kasper Hijulmand will know how hard it is to open up a team like the Czech Republic but given that his side have scored 8 goals in the last 2 games, that will not be a top priority problem in his mind.

Denmark’s 3 at the back setup has helped them quite a bit at this tournament, as it helps them stay strong in defence and fluid while going forward. Thomas Delaney and Pierre Emile Hojberg have been crucial in the center of the pitch for Denmark and will have to be on song again if they are to reach the semis of the tournament. Martin Braithwaite, albeit scored the 4th goal against Wales, has been incredibly unlucky in front of goal and will be hoping to turn his nervous nellies into fearless strengths come Saturday night.

Simon Kjaer, who has been a brick wall mentally as well as physically for his side, can guide his team to their first major semi-final in nearly 30 years with a clean-sheet against the Czech Republic. Jannik Vestergaard and Andreas Christensen have been equally sublime alongside Kjaer, and Hijulmand will be relying on them to be as solid as possible as they know the threat Czech forward Patrick Schik carries in his locker.

Denmark could relive their 1992 European Championship victory this year, but first, they will have to get past a tough Czech team, post which they will only be 2 steps away from glory.

Youssef Poulsen, who was unavailable for selection against Wales will be back for the game on Saturday but might have to settle for a place on the bench, as Kasper Dolberg, Martin Braithwaite, and Mikkel Damsgaard, all impressed in the game against the Welsh. Daniel Wass, who also missed out on the R016 game, will be back into the starting lineup in the right wing-back role. Captain Simon Kjaer, who was brought off due to injury midway in the game against Wales, is fit and ready to play the quarter-final on Saturday.

DENMARK PLAYER TO WATCH OUT FOR VS CZECH REPUBLIC:

While it is hard to pick out one player from this Danish squad, Martin Braithwaite has looked like a big threat in opposition penalty boxes this tournament. He has been a key part of every Danish attack and will be looking to increase his goal tally against the Czech Republic this weekend in what will perhaps be the biggest game of his international career.

Lyon’s star forward Nikita Parris joins Arsenal: First words as a Gunner; What can she bring to this Arsenal team?
A determined Dele Alli sends a message to Nuno Espirito for a comeback
To Top