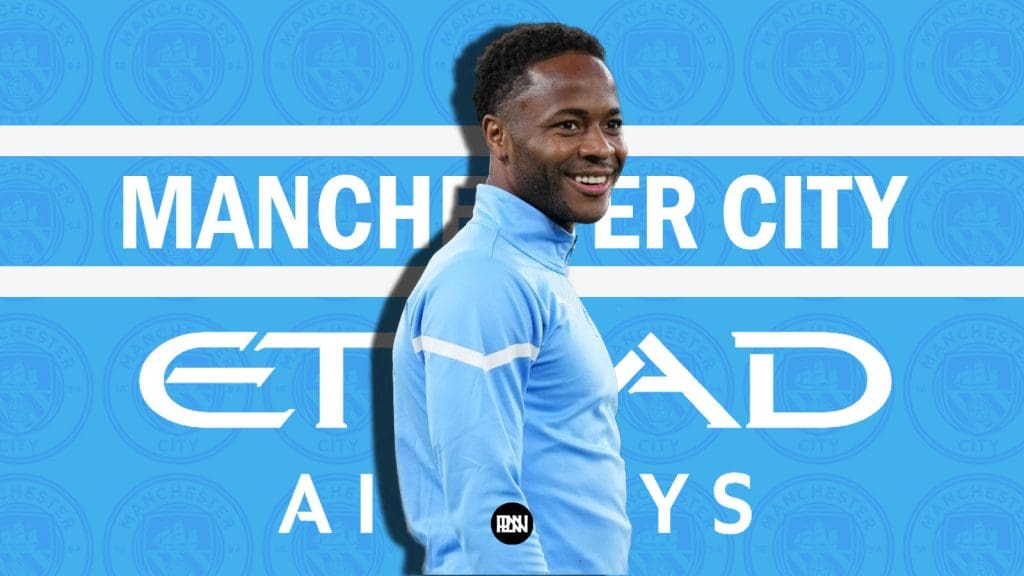 Raheem Sterling has always had a question mark over his head. Before Euro 2020 began pundits and fans alike questioned his place as a starter in the England squad. Sterling replied by scoring 3, assisting 1, and was England’s best player in the tournament. Everyone expected him to carry his Euros form to Manchester City but that has not been the case. He has started just two Premier League games so far and scored only two goals in the last 25 games. With his contract running out in 2023 and his form not improving – it does not look good for Sterling.

From 2017-2019 he was one of Manchester City’s most important players. He won the FWA Writers Player of the Year award back in 2019 for his extraordinary performances. Although he started the 2019-20 season strongly, his form descended at the turn of the year. This article dives deeper into Sterling’s downward trend of form and the reasons behind it.

Sergio Aguero – City’s main talisman in front of the goal was injured towards the end of November 2019. Ever since then, Aguero was constantly sidelined and missed 41 games for the club through injury. He played only 720 minutes last season.

As a result, Pep Guardiola had to adapt but it came with a sacrifice. Raheem Sterling’s form started dipping exactly when Aguero started missing games through injury. Coincidence? I think not. When Sterling won all the plaudits in 2018/19, Aguero also played a crucial role. This stat shows how much a lack of striker affected Sterling’s form.

His assist potential is often underrated. In the two seasons (2017-18 & 2018-19) when he played with Aguero regularly – Sterling had a combined of 20 assists (in PL) but he only had one the following season.  Perhaps City needed Kane to unlock Sterling. 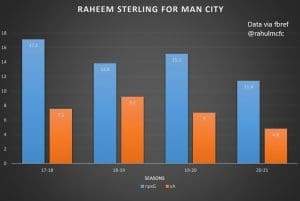 The Manchester City from 2017-2019 is different from the current team. During City’s success in that period, they had Sane and Sterling running riot in the wide areas. They were direct and used their pace to their advantage to run in behind. Guardiola preferred to have outlets in Sane and Sterling.

Since the pandemic, Guardiola has changed his approach. Manchester City sold Sane to Bayern Munich, added Riyad Mahrez in 2018 and now Jack Grealish. These two players are more attracted to the ball in possession whereas the likes of Sterling and Sane can provide runs in behind which can unsettle a defence.

Pep wanted more control with players who liked to have the ball at their feet. This reduces the need for Manchester City to defend against transitions. This is one of the reasons why City have the best defensive stats in the league. The likes of Mahrez and Grealish are much more controlled on the ball and take lesser risks compared to Sterling. It seems like Pep prefers these kinds of players currently.

During last season, Manchester City struggled for the first three months. Sterling was played on the left as an inverted winger and even as a centre-forward. As the tides started to turn – Sterling also improved his form but this time he held his position on the right-wing. For the next two months, the winger played a crucial role as City galloped past their opponents. But with Mahrez’s newfound form and the arrival of Phil Foden on the left wing, Sterling was subsequently dropped.

As City rotated the team in between the Champions League games, Sterling did get opportunities but struggled massively. His goals dried up. Pep’s heavy rotation and constant change of Sterling’s position during the latter stages of the season did not do him any favours.

So what is Sterling’s best position?

I looked deeper into Sterling’s stats last season from the right and left-wing. He started 20 games from the left and 11 from the right (in PL and CL). His xG (Expected goals) numbers remain similar from both the wings but his xA (Expected Assists) showed some difference. 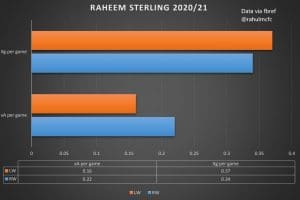 Raheem Sterling for Manchester City in 2020/21:

Sterling’s dribble success rate is much higher from the right side. He is much more direct and uses his speed to his benefit when the opposing full-back is backtracking at pace. From the left side, he is trickier when he engages the full-back. He often looks to cut inside to use his right foot which makes him a bit more predictable. To compare with one of City’s wingers – Riyad Mahrez had a dribble success rate of 53.84 % last season in all competitions to Sterling’s 55.35 %. However, Sterling attempted 168 dribbles in total compared to Mahrez’s 104. (All data taken via Fbref)

MUST READ: Ferran Torres – The tactically flexible centre-forward Pep Guardiola has been longing for

All these stats suggest one thing. Raheem Sterling does look better from the right side at least on this City side. According to Fbref, Shot Creating Actions (SCA) are any offensive actions directly leading to a shot, such as passes, dribbles, and drawing fouls. This stat catches the eye as he creates more opportunities from the right.

Sterling was dropped from the side following a 2-0 defeat against Manchester United in March 2021. Ever since that he hasn’t played on the right side once for Manchester City. His England performances have been extraordinary consistently since 2019. He scored 2 goals in his first 45 games and 16 in his next 25. His connection with Kane is crucial to the way England plays.

It does raise the question – Are Manchester City not using Sterling properly or is Sterling struggling to adapt to Pep Guardiola’s demands? The answer could be a mixture of both. 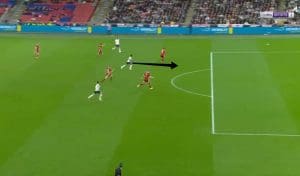 Sterling and Kane linking up v Hungary on Tuesday

Before the Euros began, Sterling suggested in an interview that his poor form for City is due to several factors. In many ways, it looked like he was throwing shade at Pep Guardiola and fans were not happy. “When it rains, it pours” is probably the best way to describe Sterling’s situation.

What does the future hold?

Pep Guardiola was full of praise for Sterling’s ability after City’s 2-0 defeat at Paris. He told “Raheem played really good as a striker last game against PSG. He created incredible spaces for all of us. We needed in that specific game, the space, the quality, the movements and speed from zero to 100 he did it exceptionally well.” Pep also mentioned that the emergence of Gabriel Jesus as a right-winger has limited Sterling’s opportunities from that position.

His profile is very unique – Great upper body strength, low centre of gravity, and lightning-quick. He is excellent in reading attacking situations combined with a strong defensive work rate. His weakness – He looks like a world-beater when he is in form and very poor when he is out of it. There is no middle ground.

From the comments, it looks like Pep will continue to use Sterling as a centre-forward. His movement behind the defense and his positioning sense in the 6-yard box is one of the best in the world, but he needs goals to boost his confidence. Manchester City and Pep Guardiola want to tie down Sterling at the Etihad, but the England star is said to wait for his chances before committing to Manchester City. Only time will tell what is going to happen.