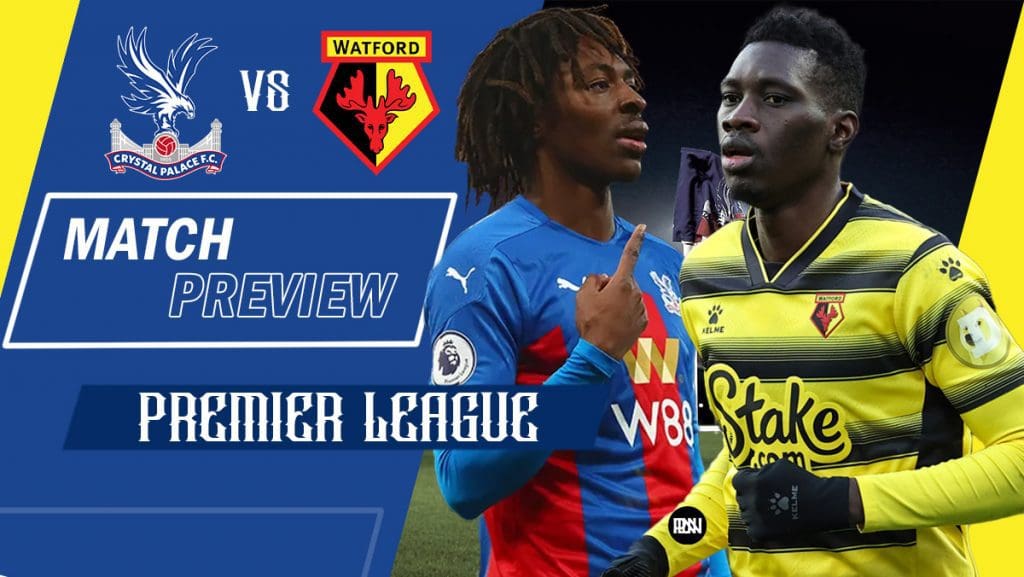 Ameliorated Crystal Palace will take on relegation battling Watford in the Premier League on Saturday, May 7 at Selhurst Park Stadium.

Crystal Palace are a different gravy this season under the watchful eyes of Patrick Viera. With 3 wins and 2 draws against the likes of Arsenal, Chelsea and the table leaders Manchester City, The Eagles have surely marked their presence well this season. From being a team trying to save themselves from the dungeons of relegation to a team aiming for a top-half finish for the first time in six seasons, Crystal Palace have raised quite a few eyebrows under the Frenchman as Patrick will be hoping for big three points this weekend to hop onto the top half of the table.

Watford, on the other hand, are far from out of the woods, but there is no escaping the truth that something spectacular will have to happen in the last weeks of the season if they are to survive. The Hornets are winless in their last 5 matches and are 12 points adrift of safety. Watford are traveling to Selhurst Park this weekend after enduring their 14th straight loss at Vicarage Road at the hands of Burnley on April 30. Watford should start looking at next year’s championship fixtures as they still have to face Leicester City and Chelsea in their last 2 fixtures of the league.

How can Viera lead Palace to demolish Watford?

The Eagles have established a particular style of tearing opponents apart, which has seen them win admirably against Everton (4-0) and Arsenal (3-0) in recent weeks. With little to oppose from Watford, how can the French World Cup champion take advantage of this execrable Watford team?

Patrick Viera had come to Crystal Palace last season after being sacked at Nice in 2020 because of poor results. With limited experience in managing European clubs, Palace fans had little faith in the Ex-Gunner. Viera has revitalized a club that had bored fans with their goal-less displays, which frequently saw them playing with 11 men in their own half for the majority of the 90 minutes. Viera, in his debut season as the Premier League manager, has prioritized attacking power and dominating possession while also maintaining good defensive shape.

Before hopping onto the crux, let us delve more into how Viera loves to field his side.

The below diagram shows how Crystal Palace play from the back with a formation of 2-3-3-2, which keeps on changing as the game warrants. 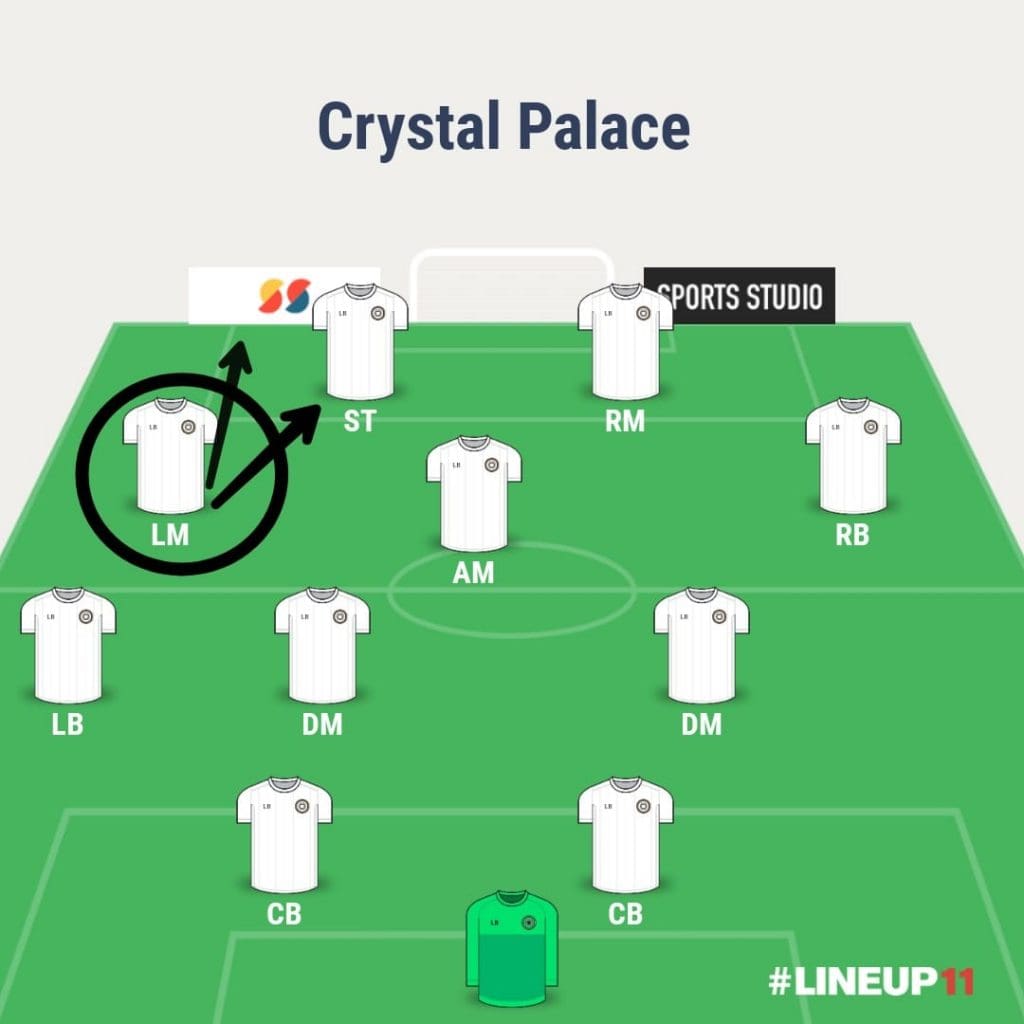 Wilfred Zaha (circled LM), a Manchester United youth product plays a very vital role in this setup. Assuming Palace are playing against a back four, Zaha wanders around the left-wing of the pitch with his team’s left-back (Tyrick Mitchell or J. Ward) coming for assistance, now while facing a pacey winger with good dribbling skills at the edge of the box forces the opposition defence to break their line with the opposition’s right back falling out of his position. This stretches the opposition’s back 4 and numerous gaps are created for Palace’s other attackers to utilize those free spaces and make off the ball runs while creating their own little space with either Zaha taking in on the defender with a few swift passes or pushing the ball sideways for either of Mitchell or Ward to cross the ball, knowing that Benteke is at the box at the end of those curvy passes.

This idea is already taking shape in South London in less than a season, far faster than anyone predicted. Their attacking production has greatly improved as a result of the new manager’s confidence in them.

Tyrick Mitchell is expected to return to the playing eleven after being an unused substitute in The Eagles’ last outing at Southampton. It will be interesting to see if club captain Luka Milivojevic returns to the side or not. Nathan Ferguson remains as the long term absentee. The trio of Kouyate, Schlupp and Gallagher are expected to start. Zaha is an obvious choice as the attacking outlet. Ezebechi Eze, high on confidence from the last match may switch his wing from left to right to accommodate Zaha, Mateta and Benteke will fight for a spot at the tip of the attack.

Watford will continue to be without attacker Cucho Hernandez for the foreseeable future, while Kwadwo Baah has recovered from an ankle injury and is fighting his way back into the group. Femenia featured in the last match against Burnley and is expected to keep his place. Cathcart might get his return in this match. Sissoko, and Cleverley, are also expected to start. Sarr, King, Joao Pedro, Dennis, and Roy does have the option of a lot of attackers but with the catch of none being effective for the last few matches. Despite the repeated thrashings, Hodgson is unlikely to make any changes to his Watford starting lineup, with the exception of a possible backline return of Craig Cathcart.

A defensive midfielder’s job is frequently thankless. While strikers are lauded for their goals, wingers light up stadiums with their breathtaking skills, and center-halves get to flex their muscles, a CDM quietly goes about their business: crucially breaking up play, disrupting an opponent’s tempo, and thus creating the impetus for their own team to build on. This season, Crystal Palace has got their own unsung superstar in this capacity. With an imposing frame, tenacious attitude, and all-around agility that has attracted similarities to another 6’4″ Dakar-born defensive midfielder, former Arsenal and Manchester City icon Patrick Vieira, Kouyaté undoubtedly provides a strong presence to the field. The 24-year-old possesses the power and engine to play box-to-box, but he could also play in front of the back four in a more defensive role. Kouyate falls in the 99 percentile in getting the most number of blocks among players in Europe’s top 5 leagues.

The Nigerian has amassed 10 goals and paved the way for 6 more in this season for Watford. He appears to wander wide and position himself outside of the box. It should be mentioned that he has played several games at left and right-wing, but the majority of his appearances have been at center-forward. Dennis has also demonstrated a strong physical presence on the field, which is a valuable attribute for any striker. He demonstrates remarkable strength in holding the ball and winning physical duels with opposition defenders. He also averages around 2.04 aerial duels won per 90. Emmanuel Dennis has a lot of speed as well. He has proven that he can outrun practically any defender in a footrace and will be keen to capitalize on The Eagles’ defence should they fall into occasional doldrums. 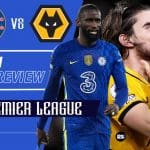 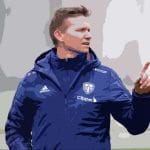