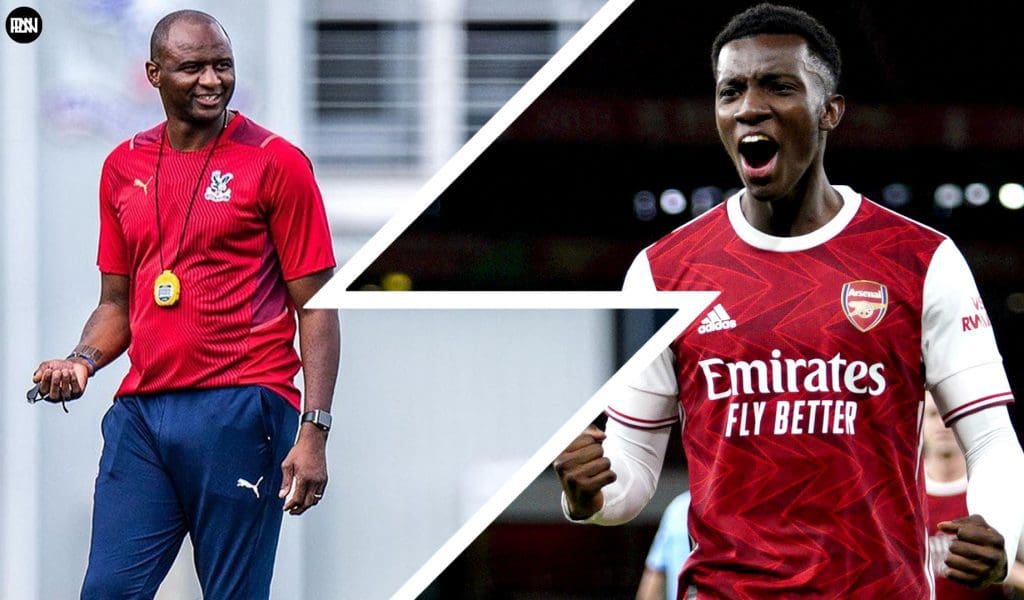 Patrick Vieira’s rebuild job at Selhurst Park has started in full force as it looks like the club have retained Wilfried Zaha’s services while they have also secured the signing of youngster Michael Olise from Reading.

The final piece in the frontline jigsaw? A young and competent forward. To that end, Vieira has looked towards his former club Arsenal, where 22-year-old Eddie Nketiah is suffering for game-time and has also refused a contract extension, with the youngster’s contract set to expire next year.

So, why does Vieira want Eddie Nketiah at Palace?

While Palace already have the likes of Christian Benteke, Jordan Ayew, Connor Wickham, and 24-year-old Jean-Philippe Mateta at the club, the former 3 are past their best while there is no saying how Mateta will turn out given the number of injuries he incurred in previous seasons while his move is not permanent and will expire next in June 2022.

Thus, in such times, a club needs a young striker who can score the necessary 15-20 goals season in and season out. However, Palace cannot go out and spend big money on players as the traditional Top 6 do, and thus, they have to rely on their statistics and the kind of player they want and eventually develop him into that player. To Palace’s advantage, they already have Zaha and Michael Olise at the club, who can provide the perfect blend of experience and youth to create goals.

They need a finisher, and Patrick Vieira believes that Eddie Nketiah is the right man for this job, and there are several reasons for it.

1) Knows how to be in the right place at the right time:

While there are several question marks about Nketiah’s finishing skills, he certainly knows how to be in the right place, that too, at the right time. This is evidenced by the fact that he was taking 3 shots per game last season, similar numbers to Alexandre Lacazette and Aubameyang, his compatriots at the club. It is one thing if your £50 million men are producing 3 shots in a game, but 21-year-old Nketiah has shown that he is not shy to take on a shot, but this also has a lot to do with his off-the-ball movement. He can play on the shoulder of the defender while he also knows how to pull defenders with him, which in turn creates space for his teammates. While he still has a lot of developing to do, being in the right place at the right time is one of the fundamentals of any forward, and Nketiah can certainly bring this with him to Palace.

While we know that Nketiah was taking 3 shots a game last season, it is also important to understand the areas from where he was taking these shots. These directly relate to statistics like your xG (expected goals), as the quality of chance you have determines how likely you are to score. Most of Nketiah’s shots last season were from the penalty box, while his compatriots in Lacazette and Aubameyang would take shots from the edge of the six-yard box. While there is no right or wrong here, Nketiah suits Palace’s current need.

When you already have Michael Olise and Wilfried Zaha doing most of the dribbling and creative work for the team, all you need is a person in the penalty box to put the ball in the back of the net. Nketiah was taking 2 shots per 90 minutes from the penalty box area last season, an encouraging and intriguing statistic for Patrick Vieira, and certainly one he can hone and develop even more over the course of a season.

While you always want your striker to be selfish, there is always a thing as ‘too selfish’ as well. Thus, creating for your teammates is essential, and while Nketiah did not have anything besides his six goals and one assist last season, he has all the tools to be a good creator as well. For starters, most of his passes have a completion rate of over 85% while he rarely misplaces a pass in the final third. One of the main issues for Palace last season was the lack of a clever centre-forward who could make progressive passes while those who could, were not fast enough to then become a part of the build-up play in the final third. Nketiah is fast, technically sound, and can cook up a string of passes in tight spaces as well.

While it may seem that passing is not exactly a priority list for a striker, every team needs precision play in the final third to score a goal, and the root of every build-up is 100% pass accuracy. Possession of the ball is extremely important, especially under Patrick Vieira, who believes in keeping the ball on the ground than in the air. Keeping the ball on the ground is not everybody’s cup of tea, and you need young, fast, and technical footballers to make this method work week in and week out. While Nketiah could still improve, he has the foundation to become an excellent creator.

Thus, it makes perfect sense why Vieira is interested in luring Nketiah to Palace this summer. Moreover, Arsenal will also be willing to cash in on the player while they still can as they are trying to raise funds to fund their transfers. Patrick Vieira’s job at Palace is not an easy one, but he will feel a lot more comfortable when he signs a player who was brought up on the same ideologies as he was as a youngster. Eddie Nketiah has the potential to become a 20-goal striker, whether any of this will materialize, only time will tell.