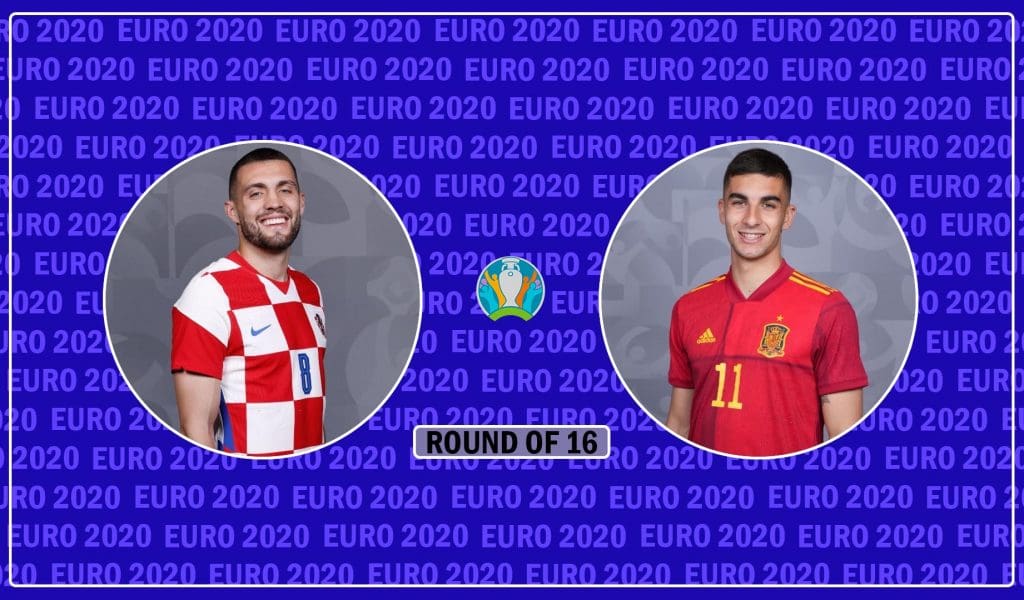 Euro 2020 is done with Group Stage and now teams are proceeding towards most exciting stage of the tournament ‘The Knockouts‘. Teams who performed well in group stage will enjoy the extended run in this competition. As the excitement boils up for the knockout stages, let us look what Croatia and Spain got for their quest to move forward in the tournament.

When Croatia and Spain, two teams meet in Round of 16 in Copenhagen, this might be one of the coldest matchups of the entire stage. Croatia, just like their opponents, didn’t start their campaign on a high note but later improved their performances as the tournament progressed. Both teams gave progressed into the knockout stage by finishing second in their UEFA Euro 2020 group.

Croatia enters this match with a victory in their last match of the group stage, defeating Scotland at Hampden and securing themselves a spot in the next round as the second-best team in Group D.

Luka Modric as he has always been, was the hero of their last match as he scored one of the classic goals of this year’s tournament, showing every one of us why he still has got gas left in his tank to rightfully play on the top level. The 35-year-old Real Madrid midfielder has always got his country out of trouble, donning the arm-band; Modric will make sure to replicate his World Cup form back when he goes into this game. Just like he helped Croatia to reach the final of the last World Cup by upsetting heavy-weights of the tournament, he will make sure to upset ‘La Roja’ in their pursuit of winning UEFA Euro 2020.

Even though Croatia lacks star power in their team, they are not the team to be taken lightly with. After all, they still have the presence of Ivan Perisic, Marcelo Brozovic, and Champions League-winning midfielder Mateo Kovacic.

Spain, on the other hand, absolutely smashed Slovakia in their third match of the group stage. Spain’s footballing style has polarizing views, still, everyone can agree that Spain weren’t 100% of themselves against Slovakia as the goalkeeper Dubravka was responsible for 2 of 5 goals due to his cardinal errors. Alvaro Morata seems like he hasn’t turned up for Spain yet, as the Juventus striker has missed a number of easy chances that could have got his team lead on numerous occasions in previous games. One of such ugly misses was a penalty that he failed to convert from the spot.

Anyways, Spain’s fans should not be worried much going into this game as their defense is looking strong and reliable, they have kept clean sheets in 4 of their last 5 games.

Croatia met last Spain last time in the 2018 UEFA Nations League. In a fixture of 2 ties, both teams snatched a victory apiece. But the weight of Spain’s victory was heavier as they smashed Croatia 6-0. Croatia returned the favor in reverse fixture by defeating Spain 3-2.

Croatia would not change much of their plans for this game, as the holding midfield pair of Luka Modric and Mateo Kovacic is working just fine for them. Their defense has kept them in games so manager Dalic will likely keep unchanged defense for this game. Ivan Perisic’s return to form will be a relief for Croatians as they get ready to go toe-to-toe with ‘Red Tigers’.

Dejan Lovren would miss the match as he accumulated enough yellow cards to earn him a suspension. Josko Gvardiol picked up an injury against Scotland, remains doubtful.

Spain’s decision to include Gerard Moreno and Pablo Sarabia in the lineup worked for them successfully against Slovakia. Doubts are rising over Morata’s position in the lineup due to the striker’s underwhelming outing on the pitch. Ferran Torres’ goal could also earn him a starting spot over Morata as a centre-forward. Pedri has impressed his countrymen and has earned a purple patch from the manager. Defenders Aymeric Laporte, Pau Torres, and Eric Garcia are forming a stable defense for the man in post Unai Simon.

Sergio Busquets took a knock against Slovakia, and he was substituted in the second half. Luis Enrique might think of resting the veteran for the upcoming match.

Suspended: None.
Injured: None.
Doubtful: Busquets

Spain likes to play dull football, slow-paced and patient. They look to sting their opponents on their errors, just like their Croatian counterparts. We’d get to witness a game with similar attributes from both sides.

I predict Croatia keeping hold of Spain for 90 minutes on 1-1 but Spain eventually comes out victorious over the World Cup runner-ups due to their greater squad depth.

Why Tottenham should NOT appoint Nuno Espirito Santo
Kamaldeen Sulemana’s transfer to Ajax in danger?
To Top