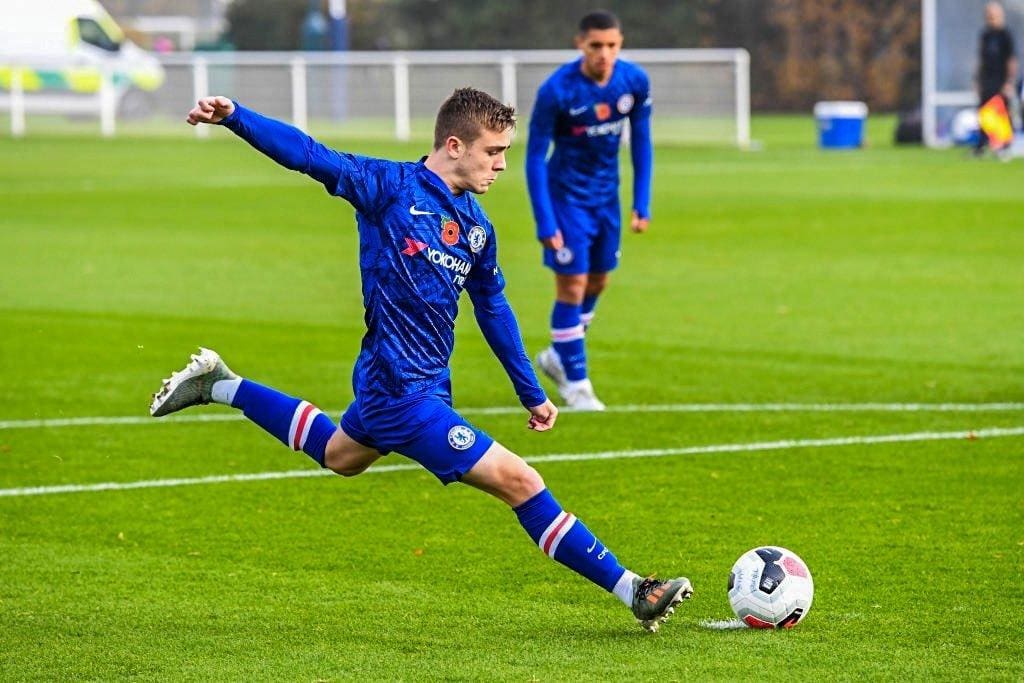 Chelsea have been known for producing world class prospects from their academy, however the chances given to these talented youngsters was highly criticized as even the best prospects were either sent out on multiple loan spells or were not given enough first team minutes. However it will be safe to say that this has changed since former Chelsea midfielder Frank Lampard took over as head coach in summer of 2019. Since then, Chelsea has given high number of minutes to academy graduates and youth. Even at the moment, Chelsea has given the most minutes to players aged 21 or under in the 2020/21 season of the Premier League, despite their new signings. Today we are going to have a detailed look at one such talented Chelsea youngster: Lewis Bate.

Who is Lewis Bate?

Bate was first noticed when Frank Lampard named him in a few matchday squads, like vs Sheffield United in the Premier League. Bate was born on the 28th of October, 2002, i.e. he is 18 years old right now. He has been a part of the Chelsea academy since the under 9s like many other first team Chelsea stars like Mason Mount and Reece James. Bate was born in London itself and plays at center midfield and has also featured at defensive midfield.

For the blues, Bate made his U18 debut in May 2018 versus Arsenal. Before that, Bate was the captain of a fairy successful Chelsea Under-15 team which won the Floodlight Cup. Bate has gone on to represent the blues at Under-19 and Under-23 levels (PL2).

Bate’s best run has been in the u18 premier league in which he has an impressive 5 goals and 4 assists to his name in 19 games, despite featuring as a defensive midfielder at times.

Speaking about his national side, that is England; he has featured 7 times for the England u17 team and also twice for the England u18 team. Last season he played an impressive 1,113 minutes in the u18 premier league and finished with 8 direct goal involvements.

One English midfielder Lewis has been often compared with on basis of his play style is Hale End Academy graduate Jack Wilshere.

Lewis has an impressive left foot and because Lewis stands at only 5 feet and 7 inches, he develops a low center of gravity which improves hid ball carrying from the heart of the field.

His best two qualities are dribbling and passing which makes him an amazing player with the ball at his feet. Speaking of his dribbling, one of his favorite moves to do is a 180 turn on the ball quickly, which normally happens when he picks up the ball, acts as if he’s going to pass it back to our centre-Backs, before turning and driving forward with the ball.

Another quality of his is his passing range. His first touch is very good, which allows him to play the difficult passes through the lines. His weight of pass is outstanding, with him always finding the perfect pass, especially between two defenders in behind. He also likes to switch the ball.

The biggest hope Lewis will have of receiving his place in the first team is youth development and chances given to academy players by Chelsea head coach Frank Lampard. The Englishman has clearly shown his trust in Chelsea’s academy graduates by offering them high number of minutes at the top level.

However, it is no secret that Chelsea’s midfield is stacked with players. The likes of N Golo Kante, Jorginho, Mateo Kovacic along with the Scottish youngster Billy Gilmour are all currently occupying the holding midfield role at Chelsea and other players on loan such as Ross Barkley and Ruben Loftus Cheek are considerable shouts for the central midfield role in the coming season.

To make matters worse for Lewis, as per many reports, Chelsea is showing serious interest in young West Ham midfielder Declan Rice for a massive fee of 70 million pounds. However Bate is just 18 at the moment and has a lot of time and potential for development which will decide whether he has a future in the Chelsea first team or not.

Obviously Lewis has a lot to improve, develop and work on but seeing his massive potential, it will be correct to say that the sky is the limit for the young and very talented English midfielder.

WATCH: HERE’S WHY CHELSEA FANS SHOULD BE EXCITED ABOUT YOUNG LEWIS BATE