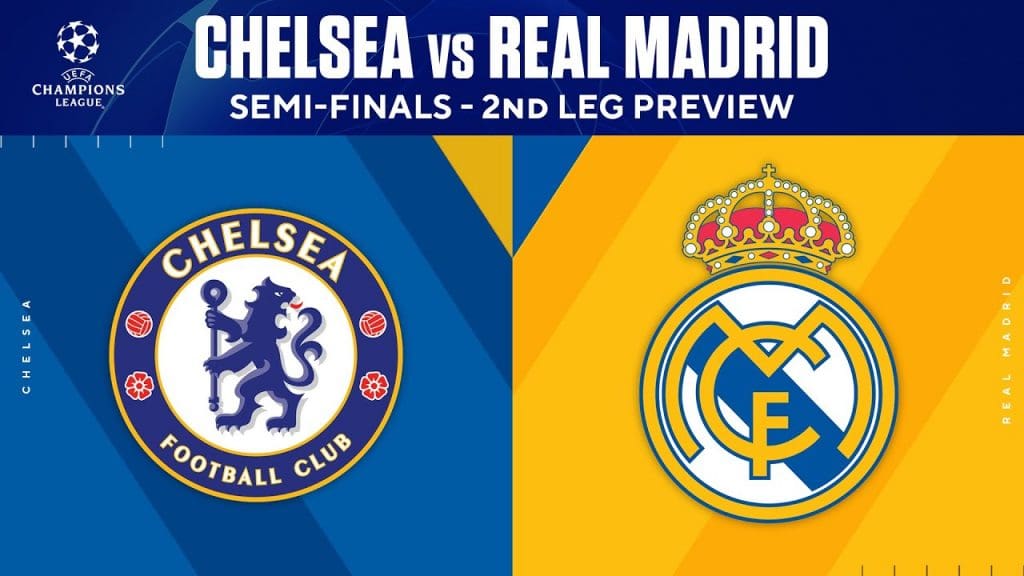 13-time Champions League winners, Real Madrid will visit Stamford Bridge on Wednesday night, as the all-white of Real Madrid look to make it to yet another European final, but face a sturdy hurdle in the form of Thomas Tuchel’s Blue army.

With the 1st leg ending in a 1-1 draw, Chelsea will be confident of keeping a clean sheet at the Bridge, but with Real Madrid not having lost a single time in their last 16 games in all competitions, Wednesday night will be a nervy affair for both clubs.

Could Chelsea defy the odds and defend their way to the Champions League final?

Thomas Tuchel would have been delighted with the way his side performed defensively in the 1st leg against Real Madrid, but perhaps not all that happy with their performance in the final third. While Chelsea carried out the game-plan like its blueprint, they failed to capitalize in the 1v1’s, including Timo Werner’s miss from 3 yards out.

These could come back to haunt Chelsea in the 2nd leg, but if the past 3 months are any evidence, it is incredibly hard to score against the Blues, let alone win against them. Thomas Tuchel has solidified the backline while also integrating an excellent passing system into the entire team. From back to front, everything flows through the 2 central midfielders, while the attackers run into open spaces or make forward runs depending upon if a team is sitting back or holding a high line.

Chelsea’s game against London rivals Fulham, on the weekend, was a perfect representation of how far Chelsea have gotten under Tuchel. The likes of Azpilicueta, Jorginho, Kante, and Pulisic were given some much-needed rest, although Kante did make an appearance off the bench. However, it was how Chelsea performed on the day without so many of their mainstays that must have delighted Tuchel.

Earlier, it was hard for the Blues to take away 3 points from the lesser oppositions because of the way they set up, but a tactical tweak opened up all kinds of doors for Chelsea. Kai Havertz was the main man as he scored the only 2 goals of the game, but the German was set up by two beautiful assists for his goals, one by Mason Mount and the other by Timo Werner. Chelsea are finally gelling into a team everybody hoped they would when they spent more than €200 million last summer.

There is a clear understanding between all players on the pitch, while the squad is also kept relatively fresh due to changes in the starting XI on a weekly basis. Real Madrid, albeit a daunting opposition, did not strike any fear in Chelsea, who took the game to the 13-time champions and showed them their unbelievable quality on the ball. The likes of Kroos, Modric, and Casemiro were left by-standers for a major part of the game and a lot of it was because the likes of Jorginho and Kante ran over them.

Tuchel has never played for a draw in his time at Chelsea and will continue to look for goals in the 2nd leg as well, but will look to keep a pragmatic approach in the defence and wing-back areas with Ben Chilwell and Cesar Azpilicueta making runs down the flanks only when necessary.

In terms of injuries, Mateo Kovacic could miss out for the 2nd leg against his former side Real Madrid, however, with a late fitness test, Kovacic could be on the bench in a best-case scenario for Chelsea. Antonio Rudiger will almost certainly be fit to start on Wednesday and after his impressive performance in the 1st leg, the German will be eyeing a clean sheet in the 2nd leg.

Apart from them, Chelsea have a fully fit squad but it remains to be seen who Tuchel will use going forward as Timo Werner’s pace could cause problems but Kai Havertz’s clinical nature in front of goal could tip the scale in his favour. Regardless, Tuchel reiterated that his main aim was to win the game on Wednesday and while that is easier said than done, Chelsea have been incredible under Tuchel and this young side will be hoping to defy the odds and make it to the final of Europe’s premier competition.

Has the time come for yet another Zinedine Zidane Champions League masterclass?

Time after time, we have seen Zinedine Zidane churn heroic performances out of this Madrid side, and on Wednesday night, the 13-time Champions will need Zidane to do so one more time.

The 1st leg represented how Madrid have managed to be so good in the Champions League all these years. Madrid had probably their worst night out in a while and yet they came away with a 1-1 draw, with everything to play for in the 2nd leg. That is how good this Madrid side are and if history is any evidence, Real Madrid will not make the same mistake again.

Although Madrid underestimated the quality of Chelsea, they learnt their mistake after a dreadful first half and looked much more sound at the back in the 2nd half while they also carried a threat going forward. Real Madrid’s talisman, Karim Benzema, was their standout performer on the day while Vinicius Jr looked promising for a short stint of time. Eden Hazard, ex Chelsea player, and legend might start for Madrid on Wednesday but he did not show anything that would have convinced Zidane to make the Belgian a starter for the 2nd leg.

The likes of Kroos, Casemiro, and Modric will be sure to turn up as well after their mediocre showing in the 1st leg. The trio are best when they are close to each other in the center of the park, something that was missing in the first 45 minutes in the home leg.

A huge boost for Zidane and Madrid is the return of captain Sergio Ramos and Madrid’s standout defender this season in Ferland Mendy. While Mendy could cause a lot of problems to Azpilicueta down the flanks, Ramos will be a huge threat from set-pieces while he will also not let any empty spaces in the defence, as the Spaniard’s positional skills are something Madrid lacked desperately in the 1st leg.

On the injury front, Zidane did confirm that Raphael Varane will be out after suffering an injury to his abductor’s muscles. However, both Nacho and Eder Militao have been wonderful deputies this season, as one of them will be selected to play alongside Ramos in midweek.

Real Madrid, who are still fighting for the title in La Liga, won on the weekend against minnows Osasuna, as Zidane fielded the trio of Hazard, Vinicius and Asensio together for the first time after more than 5 months, and Zidane will have an important decision to make in midweek regarding which two players he wants to start of the aforementioned trident.

Real Madrid will be brighter, faster, and far more solid in the 2nd leg but if there is something they can use, it is Zidane’s tactical approach to the game. The Frenchman has guided Madrid through a lot of crunch games in the Champions League and Zidane will be hoping that it gets right again on Wednesday night, which is expected to be a very tense and nervy affair.

Raphael Varane ruled out of the Chelsea encounter
Arsenal building for the future as they prioritize youngsters!!
To Top