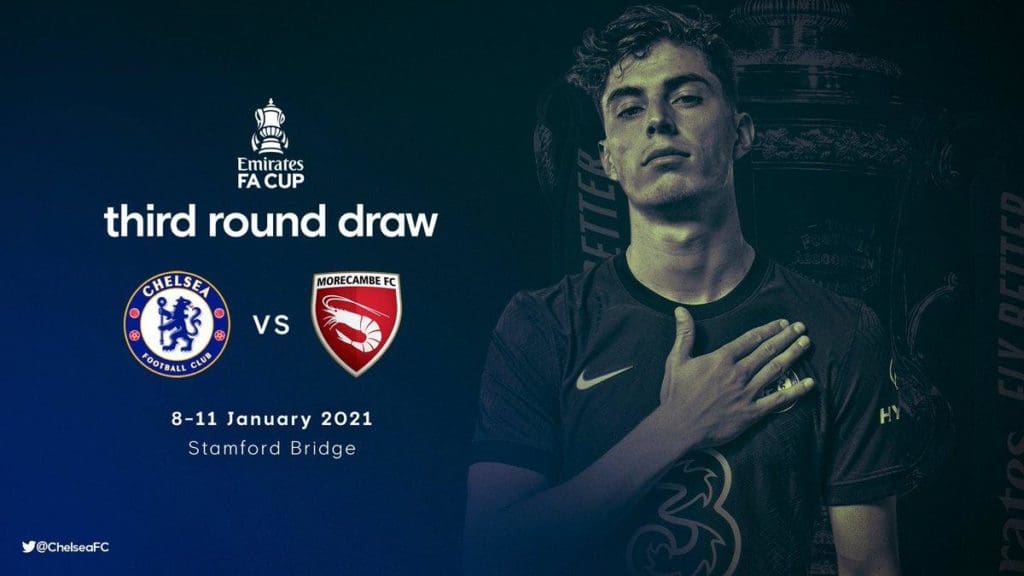 Chelsea will welcome fourth-tier side Morecambe in their upcoming FA Cup third-round fixture on Sunday.

Chelsea are the team under radar and the fact that Frank Lampard’s job at the club is just on the edge of the cliff is of no hiding. After a poor run of games, he has been the center of criticism and there has been news of him being replaced. But the board has still some confidence in him and has given him the last opportunity to prove him and thus the upcoming fixtures will not just be important to decide fate of Chelsea’s season but also to decide if Frank keeps his job or not.

FA Cup seems to be the closest trophy for Chelsea’s dream of silverware this season and a favorable third round tie against League 2 side Morecambe FC  is an opportunity the Blues from London will grab with both hands. After just missing out the last time, when Chelsea lost in the finals to fellow London rivals Arsenal, Frank will definitely love to get his hands on his first trophy as a manager.

This game could be the perfect game for Chelsea as this comes at a time where the club is out of confidence and a comfortable win could change the mindset of all the players. Some players can also use the game to get back in form and this is also a great opportunity for youngsters who are performing really well at academy level.

How can Chelsea lineup vs Morecambe?

Taking nothing away from Morecambe FC, a heavily rotated side will still be clear favorites to win the tie. Frank will certainly rest a number of first team players and can also try new tactics before big Premier League games up next. But being desperate to get the win, Frank will still field a strong starting XI and try to close the game early.

Thus we will see a mix of experienced and youth players on the pitch from the London Blues. In goal, we can see Kepa Arrizabalaga getting a start over Edouard Mendy who deserves a rest, being poor in form off lately.

With Reece James out injured, Frank will not risk Azpilicueta and thus a chance will be handed to an academy graduate. Either Valentino Livramento or Henry Lawrence will be the starting right-back and Livramento being more of a natural full-back could get the nod over Lawrence. With an impressive record of 16 goal contributions already for youth ranks this season, he will have opportunity to prove his worth at the top level.

Antonio Rudiger will make a comeback to the team as Thiago Silva will be rested for the game but with Christensen taking an injury, it will be interesting to see if Fikayo Tomori finally gets a start for Chelsea or Frank will risk his first choice Kurt Zouma. We predict Tomori to finally get his chance in the Blue Jersey. Emerson Palmieri has proved to be a great back-up to Ben Chilwell this season and thus will be the one to start this time around as well.

Midfield has been the issue point for Chelsea in their recent losses and this is where Lampard needs to sort things out. It will be interesting how Frank decides to lineup the midfield. We can see Billy Gilmour getting a start in the game alongside N’golo Kante who is suspended against Fulham next week and thus can play this game without fitness issues.

As no.10 we can see Kai Havertz being given a start after not being in the starting XI for a Premier League match for almost a month. He could capitalize on the opportunity similar to one against Barnsley in the League Cup and get in form. Another academy sensation, Lewis Bate, could play a great cameo off the bench or may surprise everyone by getting a start over Kante.

Up front Hudson-Odoi has no reasons to be dropped as he has been Chelsea’s best player in recent games and thus this will be his opportunity to rise up. On his other side could be Tino Anjorin who was fairly impressive in his last outing at Krasnodar and has also been nominated for PL2 Player of the Month award after an impressive month for academy team. Up front Tammy Abraham will be the first choice as the graduate has been great in such fixtures and Werner could off the bench early to wrap up some goals for him and end his drought.

Chelsea academy’s star striker, Jude Soonsup Bell has been added to the first team bubble on Wednesday and will wish to get himself a few minutes as well.

This is a game where Chelsea can finally turn things around for them and loosing here would be just the end of many things. But 3 points here seem certain as of now and also we can see likes of Havertz and Odoi proving why they are valued so highly. A clean sheet for Kepa is also what we can predict.