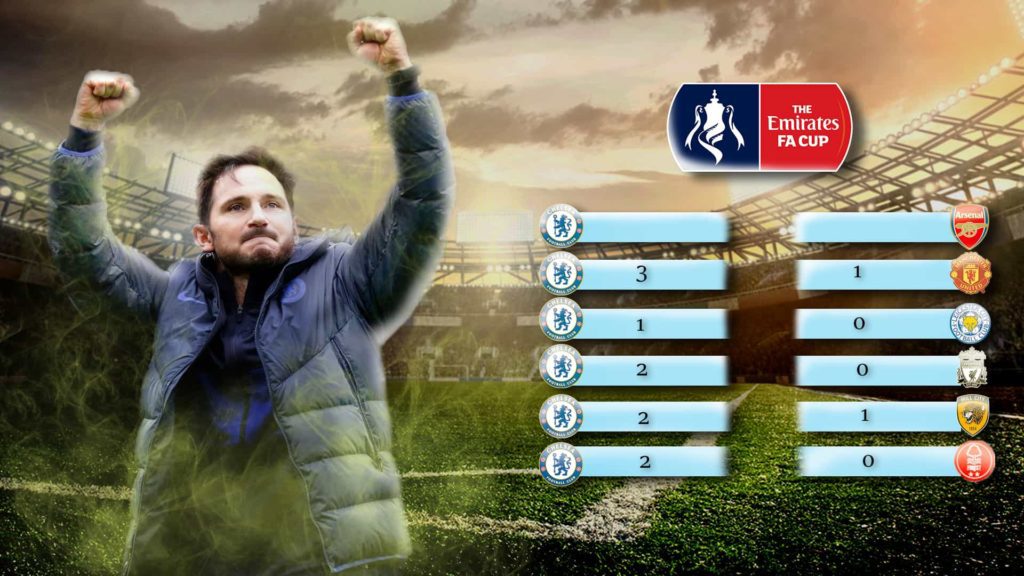 Chelsea’s 2019/20 FA Cup campaign began with a home game against Nottingham Forest which they won 2-0, thanks to goals from Callum Hudson-Odoi and Ross Barkley. It was a routine win for Frank Lampard’s blue army who played the game in a beautiful retro anniversary kit.

Next, the Blues visited Hull City, a scrappy game that ended 1-2 to Chelsea. Michy Batshuayi Fikayo and Tomori got on the score-sheet for Chelsea, while Grosicki managed to get a late consolation. Chelsea’s beautiful white away kit was probably the best thing to watch in this game, but the Blues did enough to get the win and move to the fifth round where they would face their toughest challenge yet, Liverpool.

It was the 3rd of March and Stamford Bridge was electric. 41,837 people watched with bated breath as the Chelsea and Liverpool squads walked out. The ‘come on Chelsea’ chants were interspersed with ‘Super Frankie Lampard’ as the Blues got ready for one of their biggest games of the season.

Despite two previous great performances against Liverpool earlier in the season, the Blues lost both games, one on penalties and the other, 2-1, a narrow affair at the Bridge. This was a chance, not only for redemption, but for Frank Lampard to announce to the whole of Europe that Chelsea were here to stay. Liverpool had recently been beaten by Watford, showing that they were not invincible after all.

Chelsea started the game off very well, playing at a high tempo and attacking Liverpool like not many teams do. Their efforts paid off as they went 1-0 up through Willian in the 13th minute, thanks to a fluffed stop from Adrian. The game was nervy for the next 40-50 minutes with Liverpool putting a lot of pressure on Chelsea and pressing hard when they lost the ball.

They would’ve drawn level had it not been for a fantastic triple save from Kepa and the game went on like this till the 63rd minute. Ross Barkley got the ball in his own half and drove forward. With Pedro running down the right wing, everyone willed Barkley to pass, but the man from Liverpool went on his own before arrowing the ball into the bottom corner of the goal, beyond the reaches of the outstretched Adrian, sending the whole of Stamford Bridge into raptures.

The place exploded as the whole squad went over to the corner to celebrate with Ross Barkley. The match finished 2-0 and a certain Billy Gilmour was named Man of the Match. Chelsea were through to the next round.

Frank Lampard’s side traveled to the King Power Stadium in the quarter finals of the FA Cup. The game was not the most interesting with Ross Barkley scoring the solitary goal of the game as Chelsea emerged victors. It was a tight game and the Chelsea defense did surprisingly well to keep a clean sheet.

Chelsea faced eternal rivals Manchester United in the semi-finals at Wembley. Having lost thrice to Ole’s men already, Lampard had a point to prove. It was at Wembley that Chelsea put out what was arguably their performance of the season to beat Manchester United 3-1. Goals from Olivier Giroud, Mason Mount and a Harry Maguire own goal gave Chelsea the win.

Bruno Fernandes got a late consolation goal but this was a huge win for Chelsea, who finally got something over Manchester United and as a Chelsea fan myself, this was by far the most satisfying win of the season.

On the 1st of August, the London derby at Wembley will decide the winner of the 2019/20 FA Cup. Chelsea and Arsenal will go toe to toe for their only possible silverware of the season. This is Frank Lampard’s chance to turn a pretty good first season as Chelsea gaffer into a great first season. Whatever the result, we hope we’re in for a great game.

WATCH: Chelsea’s Road to the Final | Goals and Highlights

How can Chelsea lineup against Arsenal? | FA Cup Finale 2020
Arsenal’s Road to the Emirates FA Cup finals 2019/20
To Top