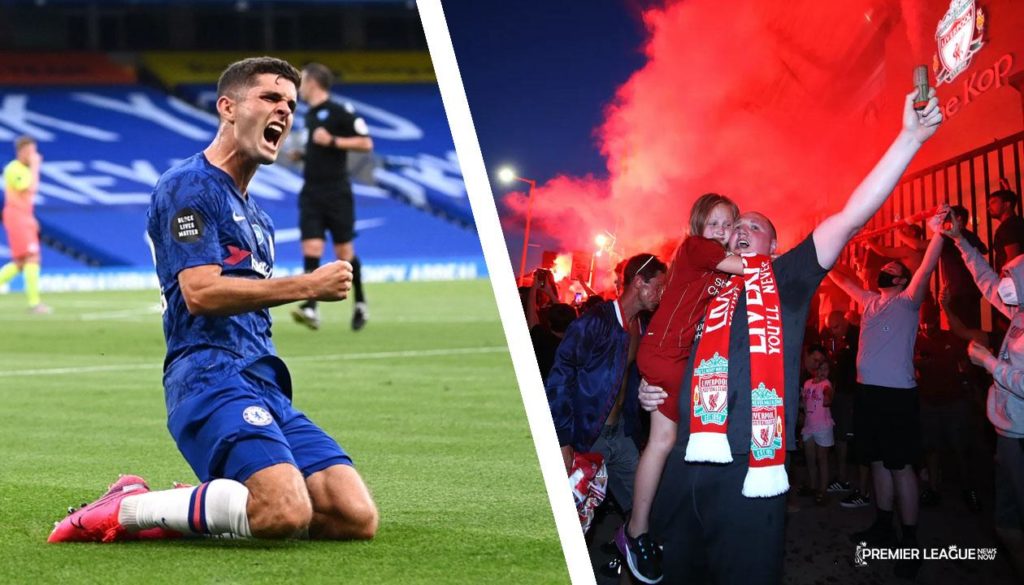 Manchester City had the chance to prolong the Reds’ 30-year wait at least until the two sides meet at the Etihad Stadium next week. It was a crucial night for as they kept their 5 point lead over Manchester United and Wolves, while the gap between Leicester City and Chelsea is just down to a single point.

Coming into the game, City looked like a better team on paper. And so it looked like it after City took charge in the game with the visitors looking under pressure with a string of attacks early on in the match. Kepa who has had a dodgy season, nearly got punished after a terrible pass but City failed to capitalise on it. In 35th minute, Pulisic grabbed the opportunity to score his 7th league goal after error in communication between Mendy & Gundogan

Pep brought on two substitutes Gabriel Jesus and David Silva after half time. N’Golo Kante’s foul resulted in a freekick and the Premier League’s top assist maker Kevin De Bruyne scored a beautiful goal to equal the scores and just the match looked like it was heading for a draw the dramatic flourish happened a goalmouth scramble ending with Fernandinho twice clearing off the line from Tammy Abraham, the second time – fatally – with his hand. A red card for Fernandinho, Willian who is probably in the last month of his Chelsea contract tapped the ball away in the back of the net to win the game for The Blues.

City had the major share of possession with 67%, but The Blues took more shots than The Citizens with 8 on target out of 13 compared to City’s 4 on target out of a possible 12. According, xG tells us the whole story of the night with Chelsea leading The Defending Champions 4.21 to 0.69.

Standout performers for The West Londoners were Andreas Christensen who on the night took a shot, attempted 5 tackles&interceptions, completed 3 clearances alongwith a pass accuarcy of 93.5%. Willian also had a great night taking a shot, completing a dribble, provided 3 keypasses along with scoring the important penalty to give Chelsea the lead once again.

For Manchester City,Kevin De Bruyne was their best player on the night. He completed 67 passes with an accuracy of 86.3%, took 2 shots, provided 2 chances for his teammates along with scoring a goal from the freekick. Riyad Mahrez also deserves a shootout for his amazing performance. His numbers on the night looked amazing with 97.3% pass accuracy of 62 touches, taking a shot and provided a match high 4 keypasses.

But the Man Of The Match, was the American International Chirstian Pulisic. He took 3 shots all of them hitting the target, won an aerial duel, completing 4 dribbles which was a match high.

Lampard was happy with his team performance and praised Jurgen Klopp’s team on their historic title triumph,

“We congratulate Liverpool. This game didn’t decide the title, that was decided a long time ago through Liverpool’s consistency and performances and wins. Fair play to them, give them full credit. They have great players and a great manager. I know the hard work that goes into trying to win a title, the competition they’ve got, we saw that with how good Manchester City were tonight. Congrats to them, they deserve it.”

“We won eight titles in a row which had never happened before in this country” the former FC Barcelona coach told the media. “It can happen to miss one. We lost Vincent Kompany to Anderlecht and had Aymeric Laporte injured. After we won those titles maybe we didn’t have the same passion as Liverpool. After two seasons the gap is big. We were not consistent like the previous seasons.

“Liverpool won the Champions League and were given confidence. They played every game like it was their last game. In the beginning, we didn’t play like that way. Congratulations to Liverpool for this great season. We still have five or six weeks to play but we won a lot in the last few years and of course we want to close the gap. We cannot forget we are still second in the league so we are better than a lot of the teams.”

Both Chelsea & Manchester City are in FA Cup action next with the Blues visiting the King Power Stadium to play Leicester City & Newcastle hosting the current FA cup holders.