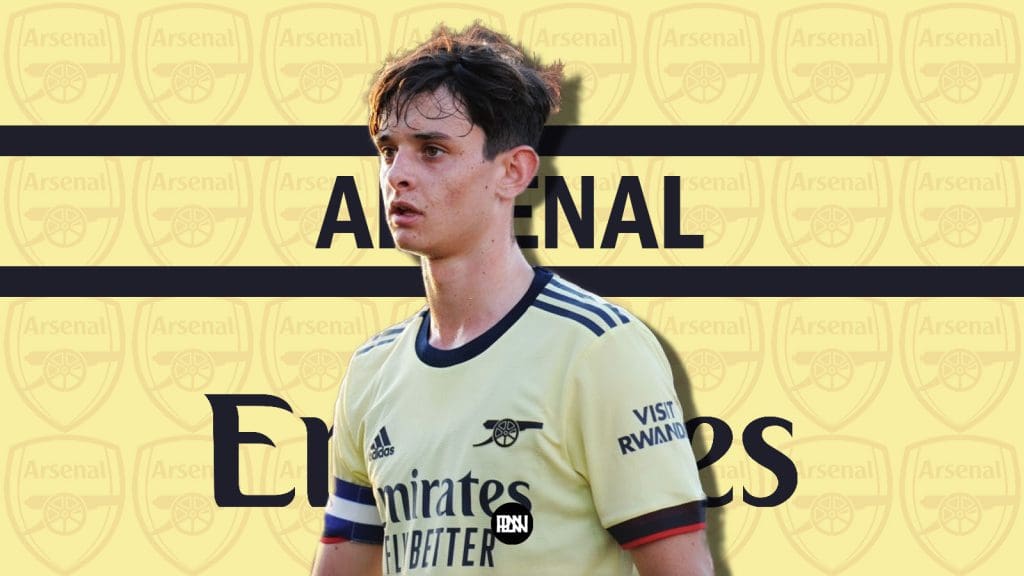 European football is hitting a new curve in identifying, developing, and honing talent around. The last 5 years have seen several clubs re-evaluate their transfer strategies, and most clubs focused on their youth academies rather than ploughing the money in the transfer market.

This has led to the emergence of talents like Erling Haaland, Pedri, Kylian Mbappe, Mason Greenwood, Mason Mount, Bukayo Saka, Trent Alexander-Arnold, and several other world-beaters. Although Haaland and Mbappe might be a notch ahead of the others, the rest are not far behind.

However, a team that has gone under the radar is Arsenal, who have been slowly but steadily churning out exceptional talent from their Hale End academy. Emile Smith Rowe and Bukayo Saka are just the tip of the iceberg that Per Mertesacker provided from the academy into the first team.

The next kid on the block could be Charlie Patino– a supreme yet natural talent that has been hovering around in the U-18s, U21s, U-23s, and might soon break into the first team.

So who is this kid who has been deemed as the best academy prospect of a generation? 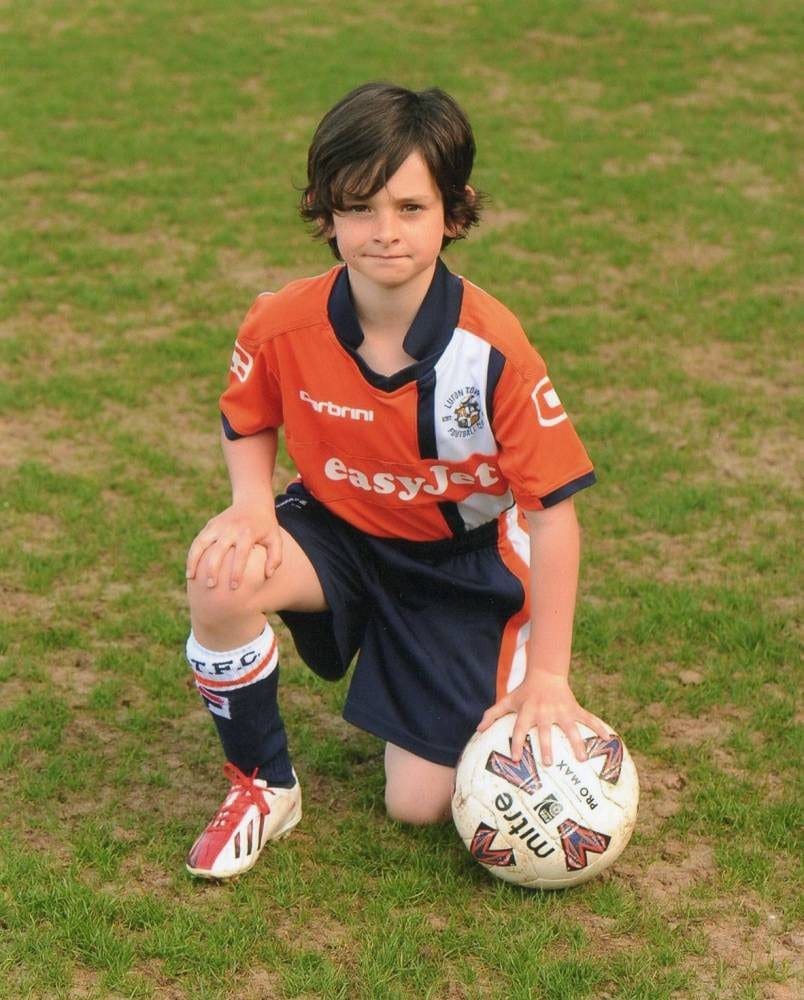 Formally playing since age 5, Charlie was always on the ground if not analysing games. It seems pretty absurd when one hears that a boy who is yet to become a teenager enjoys watching football as an analytical exercise rather than watching cartoons or surfing around social media like other pre-teens. But this was his bread and butter.

Charlie’s father, Julio, is a massive Deportivo La Coruna fan, and La Liga games were often played in the family room. Julio Patino watched the game because of his love for the club, whereas his son would wonder how Andres Iniesta glides across the pitch the way he does. It is not just being in awe of football players, but this kid wanted to emulate what he would see on the television set.

His first foray into football was with St Albans City Youth as it was close to his home. It did not take too long for Luton to realise this boy was special, and if properly developed, he could be a massive star. Although Luton are not known for their academy alumni, they have produced the likes of Matthew Upson, Lewis Baker, and ex-Arsenal midfielder Jack Wilshere.

Thus, Charlie joined the academy and was always fielded in age groups at least two or three years above his standing. This is often done by several academies for their best players as they want them to adapt to the maturity levels of professional football as soon as possible. A player could have all the talent in the world, but the right attitude is also needed to put that talent to the right use.

At age 11, the youngster was spotted by Brian Stapleton– an Arsenal scout who has been in the business for more than a decade. However, he did not think twice about making a decision to sign Charlie despite only watching him a few times.

Stapleton told Sportsmail: ‘He (Charlie Patino) is the best kid I’ve ever scouted. I said to Sean O’Connor, who was the head of my department at Arsenal, that I wouldn’t be going back to watch him again, I’d seen enough.

Nobody else knew about Charlie at the time and I said, “if we don’t act now, other clubs will start getting a sniff. I don’t sit on the fence when I make decisions. I knew this kid was special, and he can be even more special in the future. Normally, we compile five reports, and we send five different scouts to watch a player. It’s all about doing your homework.

‘But with Charlie, I said, “I understand Arsenal’s criteria with players, but I’ll stick my head on the line.” I had to go with my gut feeling.’

Gut feelings can go either way, but Stapleton’s paid off, and Arsenal moved swiftly to sign the youngster. This was somebody who was wooed by Manchester United, Manchester City, Tottenham Hotspur, and Chelsea as well, with the latter also offering double the compensation the Gunners ended up paying Luton for Patino’s services (£10,000).

Since joining the Gunners more than half a decade ago, Patino is now perhaps the best player coming through the Hale End Academy. This is because he has continued playing in a higher age group constantly and is still showing up the coaches with his skill and control of the ball.

But let us take a deeper dive into the England U-17 international’s playing style.

There is something really pleasing when a youngster seamlessly controls the ball at his feet. Some of Charlie’s role models are Santi Cazorla, Cesc Fabregas, and Mikel Arteta. Thus, there is an obvious pattern here. Spanish players with the physical ability to function in the Premier League. Charlie is no different, and he has shaped his game with the best abilities of each of his idols.

He can play as a No 6, No 8, or a No 10, but given his abilities, he would suit a No 8 role, something he has also previously mentioned as his preferred role. There is a certain swagger to his game, with his effortless deft touch on the ball epitomizing his entire game. Playing in higher age groups has helped him develop a certain awareness around him. He always opens up his body when he is about to receive a pass to keep all passing options open. His excellent control of the ball also allows him to pass the ball as soon as he receives it. It is basically two-touch football but Charlie ticks the game in midfield and keeps his opponents guessing.

Developing through the ranks at the Hale End Academy, the youngster developed a reputation of beating defenders effortlessly and often brisking past them. This would give the idea that he is just a fantastic dribbler and likes keeping the ball to himself. The truth could not be further. Yes, he is a terrific dribbler, but he understands the concept of “the ball can move faster than the player“. This is where the Frenkie de Jong comparisons come in. The Dutch midfielder was known at Ajax to pick the ball up from a deep position and then carrying the ball up the field resulting in creating a shot for his teammates 9 times out of 10. Charlie can do the same things, but he has several other elements to his game.

Primarily a left-footed player, he has a lot of control over his body positions, and his agility is second to none. This allows him to change directions almost instantaneously and trick opponents. One moment you will see he has dropped deep to collect the ball, but at the same time, he has already looked at the opposition trying to press him. In such a situation, he possesses the maturity to pass the ball back to his teammate, but sometimes he toys with the opponent deliberately. He invites the pressure and the press on him and then beats it with his swash-buckling turns and his ability to fake a change in direction. These are just some of the basic off-the-ball movements he creates regularly on the pitch.

On the ball, he does everything from dictating the play to finding the telling pass or even scoring unbelievable goals. His strike against Manchester United recently was nothing short of pure genius as he left Phil Jones in his wake and made Dean Henderson feel like he is still far off from starting in United’s first-team. However, he is so much more than that. He rarely attempts sideway passing because in his opinion it is a futile attempt at slowing down the game. Each pass needs to be played with a purpose– either it should displace an opponent’s position or be a delightful through ball taking several defenders out of the game or just progressing the ball up the pitch. Short passing, long passing, you name it, the kid has got it all in his locker.

It is true that the Premier League 2 is played at a much slower pace, which affords Charlie a lot of time on the ball. But this kid does not enjoy any of that, and he takes the game to the opposition constantly. He occupies the space in between the central defenders or in a wide area to start the build-up play itself. He then connects several passes to create a diamond in the center of the pitch to always outnumber the opponents. Possession is a crucial factor in his game, and this kid does not take it for granted. His awareness and skill to maneuver the ball out of tight spaces help him create and distribute the ball constantly. He is rarely dispossessed, something the senior team witnessed when Charlie played in a closed-doors game under Arteta recently. So he has already gained the respect of his future colleagues, he just needs to prove if he can actually be a future midfield general at the club.

There were also roadblocks to his development as he was not strong enough initially to make lung-bursting runs throughout the game. To help with this, the Gunners hired a physical trainer who drilled in the fitness levels and body weight needed in a player to produce 90 minutes worth of magic week-in and week-out.

There is a lot of poise to his game, and while Charlie is still developing, it is only a matter of practice right now. Practice makes perfect, and the kid needs to make a habit of playing 100 perfect passes in a game and running in the right areas. This is what turns the good into the great and the great and into the greatest.

What next for Charlie Patino?

The former Luton boy will be turning 18 next month and he would be raring for a senior start soon. He is the outstanding youngster everybody has their eye on and Barcelona are already readying a move for the midfielder. With 18 months left on his current deal at the Emirates, the Gunners are trying hard to get the youngster to sign a new deal that will see him commit his future to the club for a long time.

From Arteta and Arsenal’s perspective, Patino’s rise to prominence has come at the right time. This Arsenal side need a swashbuckling youngster soon and given that the club recently signed Albert Sambi Lokonga, Arteta’s long-term plans would be playing the Belgian and the Hale End product together. Both have similar abilities but are widely different. Lokonga has the energy to play the defensive side of the game while Patino is the midfield orchestrator. Every attack will go through this midfield duo, and every opposition attack could be stopped by them.

It is an exciting time to be Charlie Patino, but the kid deserves it all, and he could soon be on the precipice of playing at the highest level of the game. It is time for the youngster to become the Rolls-Royce midfielder everybody hoped he would.