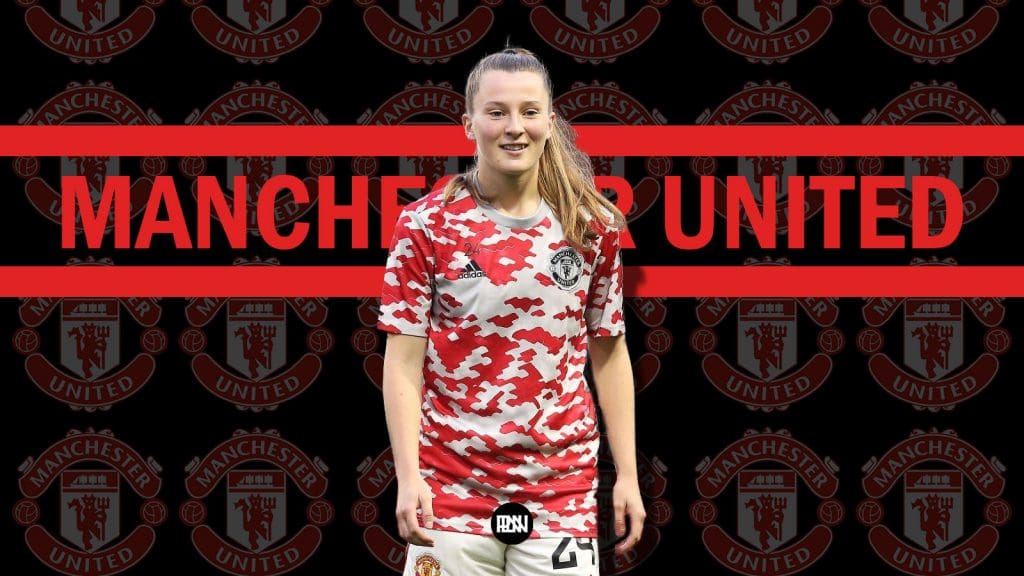 Carrie Jones is Welsh through and through and also plays for Manchester United Women’s team. Ring a bell? And no, not Daniel James, Ryan Giggs. But Ryan isn’t the ex-United player that she’s been compared to, but instead Michael Owen. But despite that, you may not know much about her, so, who is Carrie Jones?

Carrie Jones was born on September 4th, 2002, and is just 18 years old. She plays as a midfielder for the academy side and has already been capped for Wales. Jones joined Manchester United last season and has played 3 matches for the first team, but usually features for the youth sides. The promising youngster has represented Wales at all levels apart from U19, as she showed so much progress that she went from the U17 to the senior team.

Carrie was born in Wales to parents Andrew and Joyce Jones. She grew up in Newtown, Powys and has an older sister, Maia, and a younger brother, Ioan. She also attended Newtown High School.

She eventually moved to Barriew Juniors, but she was forced to leave the club after a rule was introduced which prohibited girls from playing in boys teams until they were 12 years old. This rule was eventually scrapped and Jones resumed playing in the boys’ side.

Her Barriew manager said, “It was clear from coaching Carrie at an early age that she had a special talent. Her balance was outstanding. She had fantastic speed of ball control – often leaving opponents trailing in her wake – and even at a young age, her mature attitude, and willingness to learn, made her stand out. Giving Carrie the opportunity to play with boys, up to and including U16, meant that she was constantly being challenged in every match, and every training session.

“Physically, she understood that she needed to be stronger in the tackle, and when protecting the ball. The speed of the boys game helped her to develop her technical skills, in terms of control, pressing and moving the ball quickly. I have no doubt that playing with boys helped her development immensely and began to equip her for the challenges she faced when playing at [the] national level.” She later moved back to Newtown, where she caught the eye of Wales U15 manager Matthew Clement.

Carrie joined Welsh outfit Cardiff City for the 2019–20 season, where she made nine league appearances for the team, scoring three goals. Something interesting about Cardiff is that they play in the Welsh footballing system. However, this in itself isn’t unique, but the fact that they didn’t follow the men’s team (who play in the Championship in men’s football) is interesting. Anyway, she didn’t play for them much before getting the attention of Manchester United. Former Wales player Gwennan Harries described the youngster as “So composed, got two great feet, but most importantly for me, her work ethic is outstanding, a real team player.”

Carrie signed for the Red Devils in June 2020, but mainly features for Manchester United’s U21 Academy team. Having been included in the two previous senior matchday squads as an unused substitute, she made her first-team debut on 7 March 2021 as a substitute for Jess Sigsworth in a 3–0 WSL win over Aston Villa. She is currently at Manchester United.

THE DECISION FROM HERE?

Carrie Jones is making sporadic appearances in the WSL and is playing for the U21 week in week out. So, should she go out on loan as I’ve recommended for many youngsters? Well, yes but no. I think she should continue playing for the U21 side but also have dual registration with a Championship side.

I think playing for Birmingham wouldn’t be a bad idea. After all, they have 21 players and will be in desperate need of players, especially if an injury crisis hits. The Bluenoses won’t be wanting their team to forfeit matches, so an agreement wouldn’t be that bad. And if United needed her for some reason, then they can recall her.

Kim Little: Why has the Arsenal skipper’s taken things to a whole new level this season?
Analysis of Manchester United’s defensive struggles
To Top