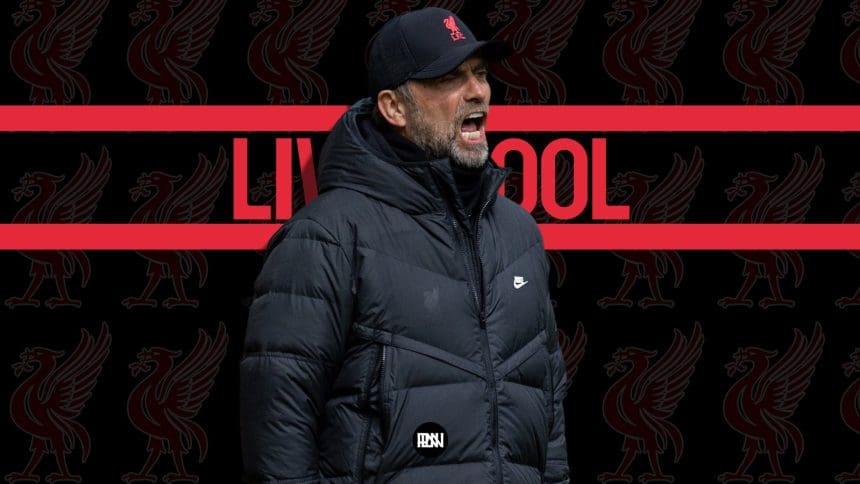 “I watched the game back plenty of times and it was a real horror show, to be honest.” – This is an excerpt from Jurgen Klopp’s post-Napoli Assessment, with even fans amazed about how far they have fallen. Liverpool had a really disappointing Champions League night leaving the Italian City of Naples with their heads down, and with a heavy heart after the scoreline read 4-1 at the end of the full-time whistle.

This can be seen as an added scratch to an already scarred season (so far) and the Reds might feel that the result against Napoli was a fair reflection of how the things currently are at the club. But if we dissect the performance, we would come to know that it is not about “what went wrong?”, rather the situation has reached to a point where now it is about, “how and when can they pull themselves out of this rut?”

At the Diego Maradona Stadium, it seemed like nothing went according to the plans. Even if we forget about the midfield woes for a second, what about the defence? the attack? The answer is the whole team was shaken and their performance was shambolic, but Klopp couldn’t wrap his head around what he was witnessing, the players had their heads in hands. Meanwhile, players like Alisson, Diaz or even Thiago (who came on the pitch for just 30 minutes) gave their all and yet had to go through such an ordeal – it was literally a RED NIGHTMARE to witness.

So, I will try to answer this question and help my fellow Kopites & football fans by drawing a comparison, based on stats and eye tests, between the performances of Klopp’s Liverpool in the past to how they are performing this season!

In the 2019/20 season when Liverpool finally lifted the Premier League title, after almost 30 years in waiting, there was one peculiar thing to note – the squad’s ability to hold their nerves together. If we talk about the depth, well, even then the squad depth was not a characteristic feature of Klopp’s side but the willingness to perform was shown by each and every individual.

The aforementioned set of players were Jurgen Klopp’s go-to XI. With each individual almost featuring in the league at least 28 times. And this squad featured in a Premier League game together, for a total of 30 games (sub-ins included).

If we compare the same situation to what it is right now, evidently enough Klopp & co. have not been able to find the right match. Keeping the injuries aside, there should be a right mix and match between the players so that each of their playstyles complements their mates – hence, enhancing the overall chemistry of the game.

Not even the front three have been fixed, apart from Salah and Diaz, and now that Jota has returned from injury it seems as if Jurgen Klopp just does not know what to do or who to put on the team sheet. Firmino, Nunez, and now Jota have all played with Salah and Diaz so far this season, and the campaign has just started. Not only that, even the backline has not been fixed! With Konate’s long-term injury the manager has been unable to find the right match to pair with Van Dijk, and this has also affected the Dutch defender’s abilities as well.

These stats are a mere reflection of how lacklustre this side has been this year! “It was the lack of intensity and determination that hurt Liverpool so much.” – such truer couldn’t have been spoken/written well enough, in light of club’s recent form.

MATCH WINNING ABILITY (of each of the players)

A very key element to how Jurgen Klopp sets out his team on-field depends on the match-winning ability of each of the players on the team sheet. In that particular “title-winning” campaign, Liverpool had a total of 17 different goal scorers- the likes of Matip, Van Dijk, Fabinho, Lallana, Lovren and Curtis Jones made to the list of surprise goal scorers…

But the one guy they heavily relied upon whenever they had to finish off the matches in the dead hour, was who else than Divock Origi. Who can forget the Iconic goals he scored against Everton and Newcastle, it was just this never give up attitude that had the crowd wailing the soulful anthem, YNWA, even as the game was about to meet its end.

Fast forward to today, there has been an unusual trend going around in the team. Up until the convincing win against Bournemouth (9-0), Jurgen Klopp’s side had conceded a goal first in 7 games leading up to the win against the cherries- avoiding defeats in 6 of those games, until a bitter defeat against Manchester United.

Only one of their games, so far this season, have shown the “never give up” attitude that we talked about earlier. In the game against Newcastle where Carvalho scored a 97th-minute winner to seal all the 3 points. Other than that, a serious lack of intent up ahead has been costing them the game. Salah’s form for instance has been a worry of late. It is not just a matter of this season, the Egyptians has not been the same since his national side’s upset in the AFCON. And even in this campaign, Salah has just scored 3 goals and has provided another 2 assists in 8 games across all the competitions. 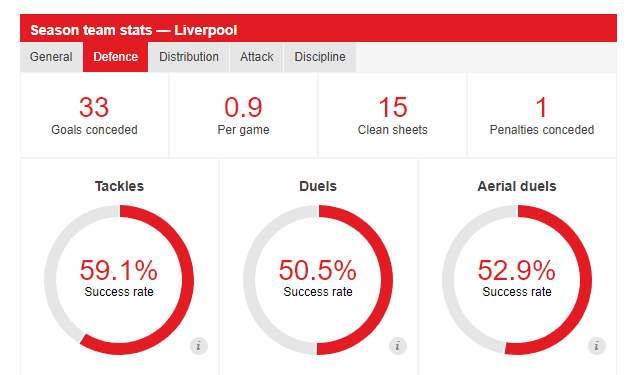 In the illustration above are the defensive stats from Liverpool’s title-winning campaign of the 2019/20 Premier League season. Truth be told, the numbers are crazy and they don’t need any explanation. I mean just let it sulk in just a solitary penalty conceded in the whole 38-game campaign. Just breathtaking!

However, the whole defensive shape seems to have changed in the recent past. Virgil Van Dijk has not been the same since his return from the ACL tear- from losing the Ballon D’or by 3 votes in 2019 to being heavily criticised in 2022. Take the game against Manchester United as a reference, Van Dijk got bashed by the media for conceding Sancho’s goal.

Another one showing how transparent Liverpool defending was. Napoli made 24 final 3rd entries, 17 of these entries turned into box entries, and they could in total create 17 shots (from @twelve_football). I had never seen Klopp’s Liverpool this intimidated. pic.twitter.com/rhiW5rxfvt

The criticism that has been going against him is that it seems as if the Dutch defender has not been committing enough during the tackles like he used to do in his early Liverpool days.

With Matip back and straight into the side, the defence looks much more stable and VVD seemed to be feeling more secure/protected- as we witnessed against Ajax in their recent outing. So it is just another point that goes to show how much a defensive pair with good chemistry brings into the side’s backline.

Since the start of this season, we have been going to the club for its Midfield woes. But diving deep into it we realise that the problem is due to a rather systemic change than any specific issue. For instance, let’s take Salah’s way of playing or just the positioning of sorts- personally, I feel that someone like Trent (an RB) has been playing much more ahead of the Egyptian.

Where are #LFC players receiving passes so far this season? #rstats pic.twitter.com/4UCXDtgEiA

The above tweet very well sums up my argument that Klopp & co. are trying to do something different- in a positive way- but it just is not happening like they want it to be at the moment. With Nunez in the side, Salah looks a mere shadow of himself throughout the game, but I feel like the “possible” change is due to the new additions to the squad. With the versatility of Mane gone, the teammates and the whole club are trying to make the big money signing in Nunez feel at home.

Now, the process can take time as it is happening with the Reds, or else it can just kickstart with a bang- as we have thus far witnessed with Haaland. All-in-all as a long-time Liverpool fan myself I would still like to believe in the process, and in downfalls or periods like these I only like to sing our soulful anthem from the bottom of my heart- You’ll Never Walk Alone… 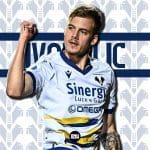 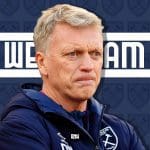