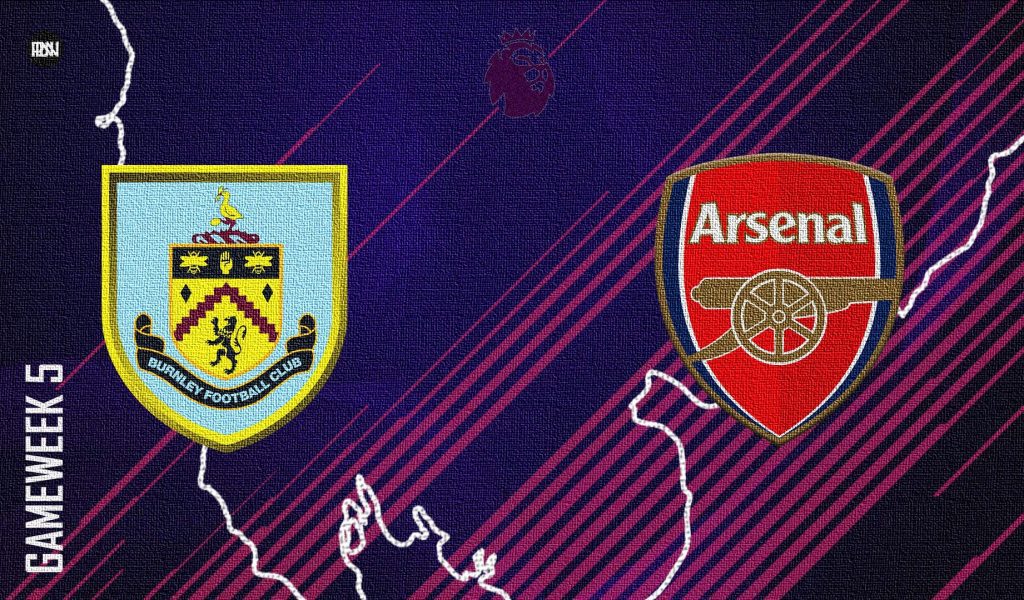 Burnley host Arsenal at Turf Moor on Saturday as Sean Dyche’s side looks to register their first win of the 2021/22 Premier League campaign. Both clubs have witnessed a tumultuous start to the season, with the hosts currently standing in the relegation zone and the visitors languishing in the bottom half of the table with only three points to show for their results on the pitch.

Arsenal secured their first win of the campaign scraping a solitary goal against Norwich City last weekend while Burnley struggled at Goodison Park, losing to a promising Everton side earlier this week. Arsenal have had the better of Burnley in head-to-head games over the years – winning 54 out of 121 games – however, recent results suggests closer encounters between the two clubs. In their previous three meetings, the Gunners are yet to get the better of Burnley, having lost one game and being held to a draw on two occasions. Burnley defeated Arsenal at the Emirates last season and managed to hold them to a 1-1 draw in their return fixture.

With both clubs in desperate need to gain traction ahead of an arduous period in the Premier League, the managers will be keen on salvaging three points come Saturday. Despite their poor starts to the season, a win at the weekend could see both clubs launched up the standings and provide them with the required momentum, heading into a flurry of domestic fixtures.

Having missed out against Everton last weekend, new signings, Nathan Collins and Maxwell Cornet are expected to be involved against Arsenal on Saturday. Sean Dyche is expected to field the same starting XI the faced Everton, with Dale Stephens, Kevin Long, and Connor Roberts out of contention this weekend.

Jack Cork may force his way into the line-up to provide additional stability in the midfield, however, with Cornet being the exception, Dyche is likely to stick to his 4-4-2 formation, fielding the regular starting line-up, at Turf Moor on Saturday.

Aaron Ramsdale is expected to remain between the sticks against Burnley, while centre-back, Rob Holding, and midfielder Mohamed Elneny will be unavailable at the weekend. Granit Xhaka will serve the second of his three-game suspension following a red card offence against Manchester City.

A pragmatic approach by both managers impeded the probability of three points for both sides in their last three meetings in the league. Having failed to create and convert adequate chances in the attacking third, both clubs have struggled to find the back of the net in recent encounters. A testament to their lack of creativity up-front, the Gunners scraped at 1-0 victory against the Canaries last weekend, despite boasting 30 shots throughout the game. Meanwhile, Burnley’s lack of defensive solidity and one-dimensional approach has cost them points in pivotal periods during games this season.

Considering recent form and previous meetings between the two sides, Saturday’s encounter is unlikely to produce a goal-fest at Turf Moor. The hosts are expected to soak the pressure and physically impose themselves on the visiting side. Burnley will likely stick to their long-ball approach, thus, expecting their forwards to dominate Arsenal’s centre-backs and occasionally play through their lines depending on unforced errors in midfield.

In desperate need to move up the table, Mikel Arteta is not expected to settle for less than three points at the weekend. Arsenal will be hoping to play through Burnley’s midfield, with the winger’s stretching the opposition, underlapping, and taking on the hosts’ full-backs in the attacking third. Pierre-Emerick Aubameyang will provide the much-needed pace on the break following turnovers in possession, with the likes of Bukayo Saka, Smith-Rowe, and the full-backs expected to provide service in the final third.

A vital part of Burnley’s approach throughout their seasons in the Premier League, Chris Wood will, once again, be the main man for the manager at the weekend. Likely to be paired alongside Ashley Barnes upfront, the duo will be expected to physically impose themselves on Arsenal’s backline and feed off crosses from the flanks. Wood is likely to be a nuisance for the Gunners’ defenders, and his hold-up play could be vital to Burnley’s creative prospects in the attacking third at the weekend.

The New Zealand international has only scored once this season but remains pivotal to their goal-scoring prospects in games against the traditional top-six sides. Provided they get the ball at his head, the towering striker is a threat on set-pieces, and could cause severe problems for Arsenal’s backline on Saturday.

Having netted his first goal of the Premier League campaign last weekend, the Arsenal talisman will be vital to Arteta’s game-plan going forward against Burnley. Facing a physically imposing and technically sound pair of centre-backs in Ben Mee and James Tarkowski, Aubameyang’s pace and off-the-ball movements will be significant to the Gunners’ goal-scoring opportunities in the final third.

With Saka and Smith-Rowe offering support after driving inside from the flanks, Aubameyang’s clinical touch and ability to play on defenders’ shoulders will be key to Arsenal’s performance in the attacking half of the pitch. The Gabonese will only make his fourth appearance of the Premier League campaign against Burnley and will be keen on adding to his tally of four goals across all competitions come Saturday.