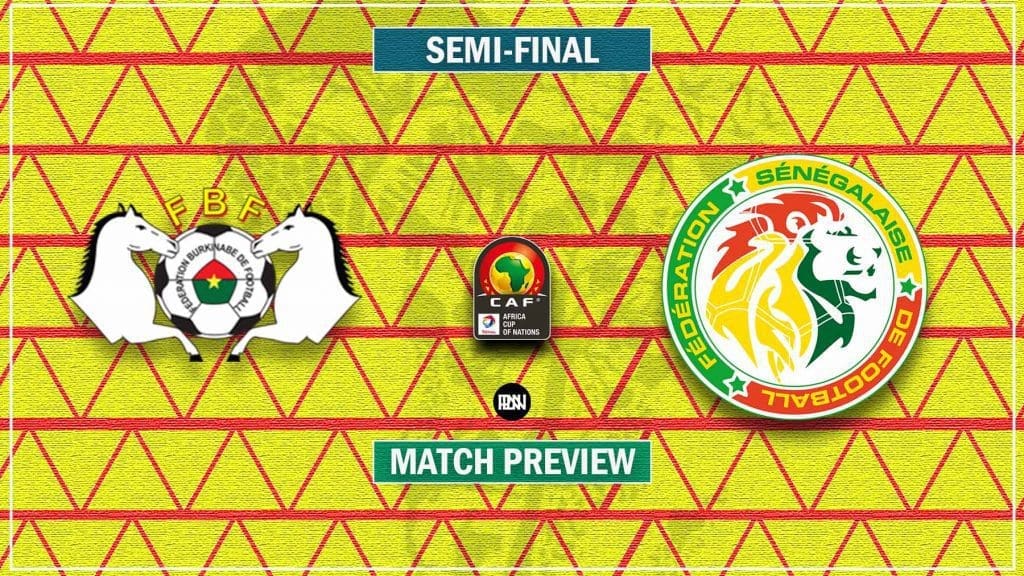 Two promising African teams in the last decade come up against each other in the quest to book a place in the final of the 33rd edition of the Africa Cup of Nations. On Wednesday night, the ever promising Burkina Faso side take on the Teranga Lions of Senegal who have been impressive in this tournament.

2013 finalists Burkina Faso have been impressive in recent years and will look to present the Teranga Lions with a shock defeat on Wednesday at the Ahmadou Ahidjo Stadium. Finalists of the 2019 Africa Cup of Nations, Senegal will also look to make it to back to back finals and increase their hopes of being Champions of Africa for the first time.

This tournament has presented fans with shocking moments, controversy, quality and lots of physicalities and on Wednesday night it will not be any different.

Dango Ouattara will miss out for Burkina Faso after being sent off against Tunisia. Djibril Ouattara will likely have to miss out on this fixture too despite only making his first appearance of the tournament in the quarter-final following yet another injury.

In defence, Senegal have been imperious so far, conceding just once in five games and we expect to see an unchanged back four of, Bouna Sarr, Kalidou Koulibaly, Abdou Diallo and Saliou Ciss playing in front of Chelsea’s Edouard Mendy in goal.

Watford’s Ismaila Sarr was impressive and found the back of the net in the quarter-final and could start in this fixture.

In their quest to achieve the unlikely, Burkina Faso will look to play with determination and belief and stick to the game plan of Coach Malo in this fixture. With ten men in the last ten minutes of the game against Tunisia, they were relentless and brilliant in their defensive performance with the crowd cheering them on to hold on. Tapsoba and shot-stopper, Herve Koffi were crucial in their qualification to the last four.

The goal will be to make it to the final and surpass their 2013 run, where they made it to the final before suffering a disappointing 1-0 defeat at the hands of three-time champions Nigeria.

Blati Toure was absolutely incredible in midfield for his team. His hard tackles and superiority in duels in the game were vital. He will be crucial for Burkina Faso on Wednesday night when they take on an even better Senegal side. They will be without teenager Dango Ouattara who found the net at the stroke of halftime when he was played through by a great pass from Toure. His composure to just knock the ball back and finish in exquisite fashion was just beautiful for the Burkina Faso fans. Unfortunately, he was sent off with ten minutes to go and Burkina’s attack could be centred on captain Bertrand Traore in this fixture.

Tapsoba and Herve Koffi will be vital yet again if Burkina are to stand a chance against the Teranga Lions of Senegal.

However, Senegal kicked off their Afcon campaign with a win courtesy of a Sadio Mane 97th minute penalty and picked up two draws to finish top of their group. They then beat nine-man Cape Verde with a 2-0 scoreline in the round of 16 and then showcased an impressive 3-1 performance in the quarter-final against Equatorial Guinea.

Senegal, who lost to Algeria in Egypt three years ago, head into Wednesday’s game unbeaten in 11 straight games, claiming eight wins and three draws in the process and will look to continue their successful streak towards the grand finale of the competition.

Senegal conceded their first goal of the tournament against Equatorial Guinea in the quarter-final and their defensive set-up is one of the best if not the best in the competition. The Teranga Lions head into this game with immense quality and versatility in their squad. Notable names like Sadio Mane, Idrissa Gueye, Kouyate, Ismaila Sarr, Abdou Diallo and Chelsea’s Mendy will all look to stamp their authority in this fixture in their various positions all over the field.

Lots of chances will be created in the wide areas where Liverpool’s Sadio Mane and Watford’s Ismaila Sarr operate. Finding the back of the net first against this Burkina Faso side will be very crucial to Senegal’s performance in the game considering the great defensive performances of Burkina Faso. A back to back final appearance will be a huge boost for the Senegalese players in the quest to be African champions for the first time.

Fifa best goalkeeper 2021 and the wall between the sticks at Stamford bridge, Senegal goalkeeper Mendy will look to be at his very best in this fixture. The Chelsea shot-stopper has conceded just a goal in this tournament and with the preferred backline of Sarr, Koulibaly, Diallo and Cisse, a clean sheet looks likely for the 2021 champions league winner. The Chelsea goalkeeper has 8 clean sheets in 20 appearances in the premier league this season and 55 saves to his name and on Wednesday night against Burkina Faso he will have to be at his utmost best.

Watford winger Ismaila Sarr made his presence felt in the tournament with Senegal impressive performance against Equatorial Guinea. The Watford winger came off the bench and found the back of the net through Sadio Mane’s cut-back pass. With 5 goals in 12 appearances this season in the premier league, Sarr will look to cut it from wide areas and with his immense pace and dribbling ability, he will be crucial in the semi-final for Aliou Cisse’s men. Bruno Guimaraes to Newcastle United – The Breakdown
Next Article 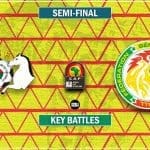