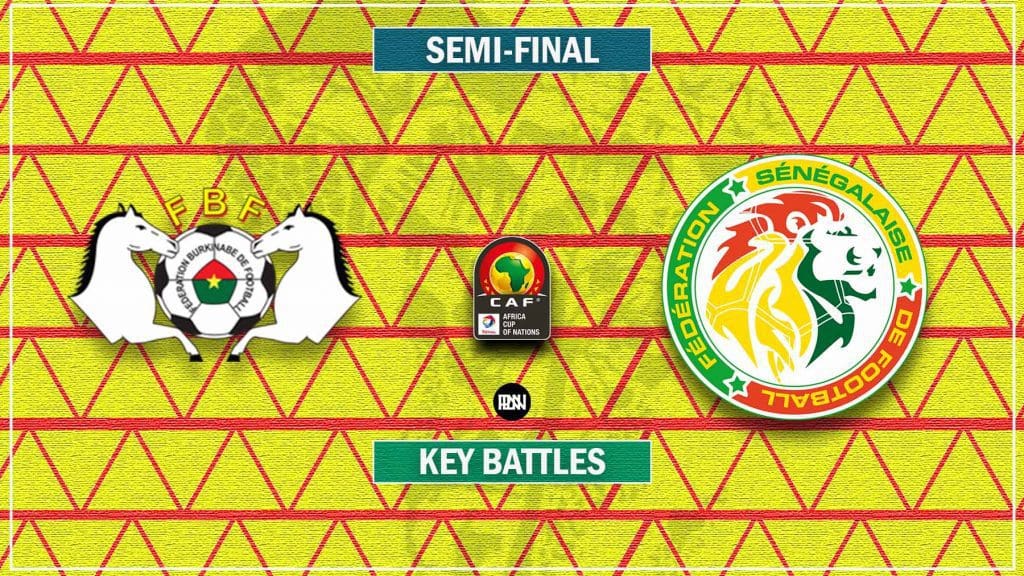 Senegal will be seeking to make a 2nd consecutive AFCON final appearance whiles Burkina Faso will be aiming at making the final for the 1st time since 2013.

The Teranga Lions of Senegal go into this game having conceded just a goal whiles Burkina Faso has conceded 4 goals. Both teams go into this match seeking their 1st ever continental trophy. The Senegalese team comes up against a very resilient and relentless Burkinabé side whose strength lies in teamwork.

Here are a few clashes to look out for in the game:

Famara Diedhiou has become the preferred number 9, the typical striker just like M’baye Niang in the 2019 AFCON. He scored the opening goal against Equatorial Guinea.

Diedhiou is physically strong, athletic and powerful in the air. He possesses great footwork, apt positioning and an eye for goals.

Famara Diedhiou comes up against a very resilient and impregnable Burkinabe defence led by Bayer Leverkusen’s defender Edmond Tapsoba. The 22-year-old has been at the heart of the defence for the Stallions making the work of goalkeeper Hervé Koffi less strenuous.

Tapsoba silenced Wahbi Kazri and Yousef Msakni when the Stallions locked horns against the Carthage Eagles.

Diedhiou is a threat especially in aerial duels and Tapsoba will need to be swift in handling each aerial duel that comes his way to prevent him from scoring.

Sadio Mané has been the go-to player in this Senegalese team particularly in the absence of a lot of creative players. During the group stage games, he was unimpressive and uninspiring but seems to have found his mojo in the last 2 games.

The Liverpool player scored a goal against Cape Verde and assisted Famara Diedhiou against Equatorial Guinea in the Quarter-final. After finding his feet in the competition, Mané is now exciting the crowd with his dazzling runs and how he dashes along the left flank with purpose, passion and a sense of urgency.

Issa Kabore was also very efficient in the Quarter-final game against Tunisia effectively putting Youcef Msakni at bay throughout the game. He contributed to the team’s attacking impetus on the right flank and was reliable when it mattered most at the right-back spot helping the Stallions defend their slender 1-0 lead.

Kaboré will have his work cut out for him as he will come face to face with one of the most skilful and technically gifted players in world football at the moment. Mané’s physicality and the blistering pace is also something Kaboré will have to contend with in the game.

Edouard Mendy missed Senegal’s 1st two games as a result of the Coronavirus pandemic. The Chelsea goalkeeper who recently won FIFA’s Goalkeeper of the year award has kept 2 cleansheets and conceded a goal.

He has not been extraordinary but has not been poor too. Mendy will need to be very alert against a very unpredictable determined, resourceful and relentless Burkinabé team.

On the other hand, Hervé Koffi has been in between the sticks for the Stallions since the 1st game. The Charleroi goalkeeper has managed to pull some superb saves to keep his nation in the competition.

He will still need to make crucial saves against some of the best attackers in African football who are housed in the Senegalese national team.

Blati Toure has been very instrumental in the middle of the park for the Stallions enabling him to win 3 Man of the Match awards and securing him a move to the Egyptian team, Pyramids FC. He has started all 5 games in the AFCON so far for Burkina Faso and his double-pivot partnership with Adama Guira has effectively shielded the defence from the attacking threat of the opponents.

The duo come up against Idrissa Gana Gueye, Pape Gueye, Nampalys Mendy/ Cheikhou Kouyaté. So far, the Burkinabes have “bossed” midfield in all their matches and will be facing real competition against the Senegalese in the middle of the park.

Gana Gueye is noted for ball recovery, tackles and his ball progression and how he occasionally scores belters. He has been missing on the scoresheet for the Teranga Lions.

The battle between Blati Toure and Gana Gueye is surely the one to keep an eye on.

Saliou Ciss just missed the 1st game against Zimbabwe but has featured in the other 4 games so far played. He has been solid on the left side of the Senegalese backline especially when defending. He is robust and quick as well and therefore leaves no stone unturned in making sure no ball surpasses him.

In the absence of Dango Ouattara who was sent off against Tunisia, skipper Bertrand Traore will have to step up to the occasion if the Stallions wish to gallop into the final.

Traore has a goal to his name in this tournament. He loves to take on players, cut in from the right-wing and then curl the ball into the net. The bane of the Burkinabé attack is how wasteful they are in front of goal.

Bertrand Traore and his men must be clinical enough to stand a chance against the 2019 finalists. 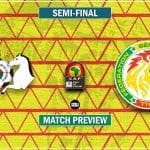 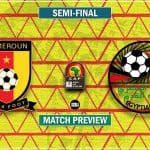