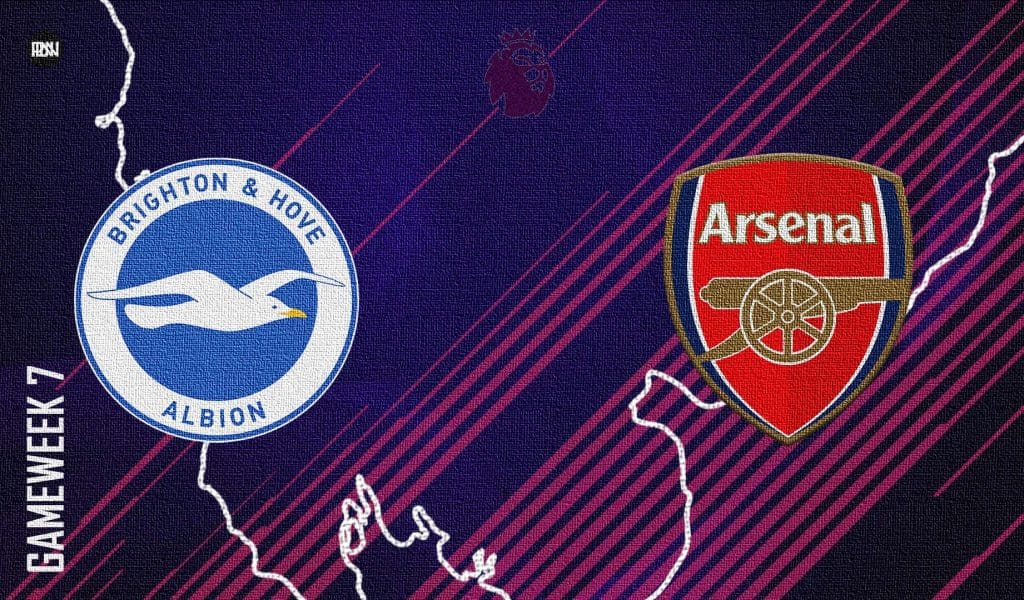 The Premier League is back this weekend, and while Liverpool versus Manchester City will be the paper-view tie, there is one more fixture that could be hugely entertaining. Arsenal are set to visit Brighton as both teams look to make a real push into the Top 6 this season.

The Seagulls are finally portraying the kind of football everybody expected they would play when Graham Potter was appointed by the club. While the football was always hidden in there somewhere, they have now found to way to win points and churn out victories. Most of Brighton’s victories have been with a difference of just a single goal. They have not been lucky by any definition of the word, but they have become smarter and harder to beat. They understand the art of closing down the opposition and punishing the mistakes. Leicester City flourished in this tactic during their miraculous road to the 2016 Premier League triumph. While that team did include some world-beaters, the Amex outfit are far more cohesive as a team, and the goals are coming from everywhere. However, on Saturday, they will be playing a side in Arsenal that has now stretched its wings and are ready to trample any opposition or at least have the confidence to do so. While that is the case, the Seagulls do have the ability to outmaneuver and outrun most teams. Potter will have to tinker with his side, but if there is one team these days that have become incredibly annoying to play, it would be the Seagulls. They will have to be witty and tactful if they do hope of picking up all three points on the weekend.

Oh, how the tables have turned? In the relegation zone before the international break, back into the top half of the table right before the next break. It has taken all but three weeks for Mikel Arteta to prove his metal to the doubters, the pundits, and the hypocritical set of fans. The Spaniard reiterated time & again that they can be judged only once all of his players were fit. If victories against Norwich and Burnley were unconvincing, the performance against Tottenham Hotspur would certainly have hurt the shrewdest doubter as well. It is impossible not to like this Arsenal side. They are now fearless and approach games the same way. They do not think twice before plunging into a tackle or taking a shot from outside the box. The confidence is oozing, as is the talent on the pitch. Martin Odegaard has quite possibly become a game-changer for the club but it would rude to not recognise the team effort that is going into harbouring this turnaround. It is not easy to function when everybody wants to see you sacked or be sold to another club. It was a real dark opening to the season, and it never felt like this club would see the light of the day again. But that is what separates the great clubs from the good clubs. The belief has arisen again, and their trip to Brighton on Saturday will be a test of this. Was this just a three-week wonder, or are the Gunners the real deal? We shall find out soon.

There are a couple of injuries on Graham Potter’s mind for the game on Saturday. Adam Webster is set to be out until the end of the international break, and the duo of Steven Alzate and Danny Welbeck had to come off during the game against Palace. Both players could be facing a late fitness test before the 17:30 kick-off. If Welbeck does fail to make it into the squad or into the line-up, Alex Mac Allister could be entrusted with the job, while Aaron Connolly will also want to throw his hat into the mix. Yves Bissouma, who failed to feature in the draw at Selhurst Park, could be back fit for the game. Lastly, Enock Mwepu could also feature, provided he shrugs off his groin issue. Thus, while there are a couple of uncertainties, a lot of it will depend upon fitness tests early into the day on Saturday. Thankfully for the Seagulls, Neal Maupay is fit as a fiddle and will be looking to score his 5th goal of the season against the Gunners.

Mikel Arteta will be pleased with the fact that the Gunners have very few injuries. An injury-ridden start to the season derailed most plans but the Emirates outfit now have a near fit-squad. One worry would be the injury of Granit Xhaka, whose knee injury is set to keep him out for the rest of 2021. Albert Sambi Lokonga‘s importance to Arsenal’s play is set to get bigger, but given that the Gunners do not have any European competition, they can go into this game as fit as ever. The line-up is not expected to change all that much unless the Spanish gaffer decides to give either Nicolas Pepe, Ainsley Maitland Niles, or Gabrielle Martinelli a chance to start. However, after the impressive performance against North London rivals Tottenham last weekend, it would be cruel to take anyone out, including Aaron Ramsdale, who is slowly starting to become the No 1 at Arsenal.

Will Graham Potter use the classic playing in between the lines philosophy?

If there is one thing Brighton can guarantee, it is attractive football. The Seagulls are brilliant users of the ball, and their crisp passing is often mesmerizing. The midfield is constantly shifting and changing positions, and Adam Lallana has given a certain oomph to this team. The Englishman is reinvigorated under Potter and is constantly finding spaces in between the lines. The Gunners have dealt with a way of dealing with crosses because the likes of Takehiro Tomiyasu and Kieran Tierney close down the ball quickly and hurry the opposition into finding the crossing the ball into the box. However, they can be opened up between the lines. Gabriel Magalhaes and Ben White have been brilliant in the last three weeks, but it has been individual brilliance. The two are yet to form an understanding, and Brighton can exploit this weakness. Thomas Partey can only do so much, but if the Seagulls do have Yves Bissouma on the day, they could cause a lot of problems. The Mali international is an excellent distributor and recycler of the ball, while Lallana understands the art of positioning himself in between the two strikers. It is a classic system they have played continuously this season to open up rigid teams and especially those who work on a counter-attack and Potter would be hoping it works again on Saturday.

Will Arteta be planning on hurting Brighton on the counter-attack?

There is so much talent across the Arsenal frontline but what they have also developed in recent weeks is the desire to win the second ball or link-up play quickly. None of the forward players want to keep the ball for more than 5 seconds and venture out a move. The ball needs to be moving continuously, and this is why the Gunners are excelling recently. Their 2nd goal against Tottenham depicted this perfectly as Emile Smith Rowe’s lung-bursting run was too much for Spurs to keep up with. Bukayo Saka’s direct running is a constant threat, while Martin Odegaard is always on the lookout for a pass. Yes, Arsenal do like keeping the ball but so do Brighton. Mikel Arteta might not mind if the possession shifts either way, but he would be tempted to play on the counter-attack since Aubameyang has regained some of his form, while Brighton’s defenders might also not cope with the energy and desire by Smith Rowe and Saka. They are a rigid side, and they will be looking to break on the counter constantly. Possession will be Plan A, but the goals will come from rip-roaring counter-attacks on Saturday.

Who else? Brighton’s top goal-scorer this season has been in brilliant form, and there is just a way he is finding to put the balls into the back of the net. The Seagulls might be an attractive side, but their bully upfront is turning out to be one of the best in the business this campaign. Hardly ever found in the build-up play but providing huge influence in the final third, Maupay has structured his game in the area it matters the most and is also taking the chances that come his way. His 95th-minute equalizer against Palace was nothing but pure instincts and a calm head to finish the ball. He is rash in closing down but just as mature in front of goal. Potter has spent a lot of time nurturing these instincts in his centre-forward and the club are now reaping the rewards. White and Magalhaes will be aware of the Frenchman’s harrowing nature and will have to do one heck of a job if they plan on stopping him from putting the ball in the back of the net. The 25-year-old has found his feet this season, and short of pulling him down or fouling him, there is very little Arsenal will be able to do to stop the fearless forward on the weekend.

The Norwegian is pulling the strings in midfield like a conductor at the opera. Everything is flowing through the 22-year-old, and his thread in the needle passes are capable of opening up the best teams in the league currently. One thing Odegaard is doing differently as opposed to last season is that he is more spatially aware of his surroundings and is always looking up for his next pass. He is voluntarily waving off any extra time on the ball and is slotting in the passes time after time. Everton found a lot of success against Brighton a couple of weeks ago by continuously moving the ball ahead and countering on the break. Every team needs somebody who will play the right pass, and for Mikel Arteta’s side, it is certainly Odegaard. The left-footed magician is becoming incredibly adept at controlling the ball with his first touch and finding the right pass with his second. While Yves Bissouma will be on the Norwegian’s case all night, it will be hard to stop the swivel and the turns of the 22-year-old on Saturday.