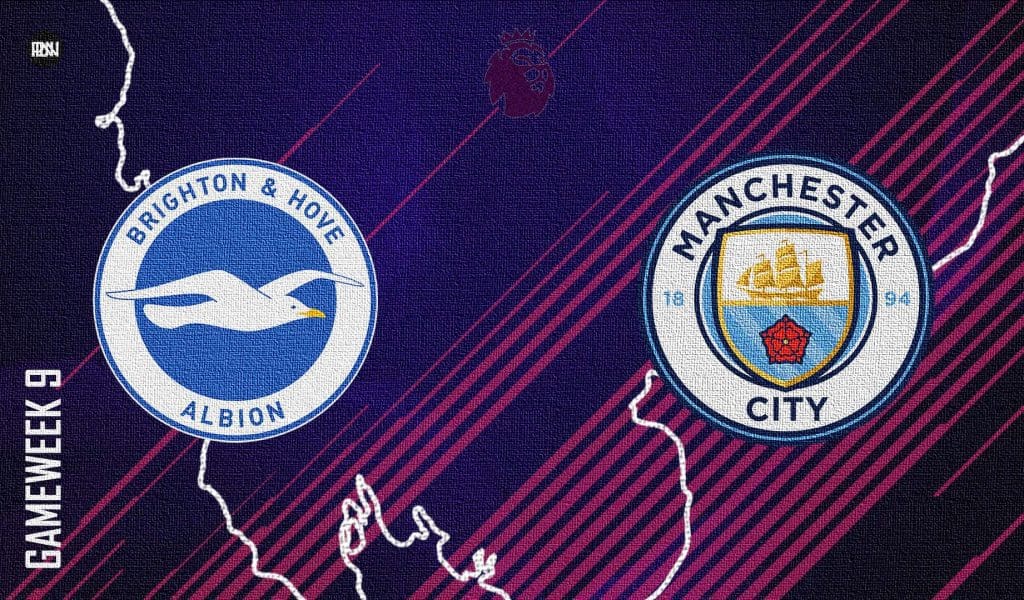 Manchester City will look to continue their winning ways after the 5-1 demolition of Club Brugge in the Champions League on Tuesday. They will face a resilient Brighton & Hove Albion side who sit 4th in the Premier League table. They were off to a flier at the start of the season, but things have slowed down a little with a couple of draws against Arsenal and Norwich City.

Graham Potter’s men will look to give a solid fight against Manchester City as they look to bounce back to winning ways. Ever since the English manager arrived, Brighton have played some exciting football but were let down by not being clinical in front of goal. A win will see them go above Manchester City into 3rd position.

Manchester City will be without Ferran Torres as he is ruled for 3 months due to a foot injury suffered during the international break. Ederson and Gabriel Jesus missed the game against Burnley as they arrived late back from international duty. Ederson played in the Champions League game but Gabriel Jesus was an unused substitute. Both should be available at the weekend. John Stones missed the midweek clash due to personal reasons but should return against Brighton.

As for the hosts, Danny Welback and Steven Alzate remain long-term absentees. However, Adam Webster might be available for selection again after being sidelined for a month. Tariq Lamptey is pushing for a start after he replaced Joel Veltman in the second half against Norwich. Yves Bissouma is also set to be available after making the bench last week.

Graham Potter’s style of play means Brighton will look to attack Manchester City from the front. They have been solid defensively thanks to Shane Duffy’s rebirth in Brighton colors. After a rampant start, they are beginning to slow down and are struggling in front of the goal again. They failed to score against bottom-placed Norwich City last week after a far from convincing performance. However, they will go into the game with confidence after last season’s stunning 3-2 comeback victory against Manchester City at the Amex in front of 10,000 supporters.

Manchester City are back to form after two consecutive wins against Burnley and Club Brugge. Before City’s defeat against this week’s opponents back in May, they have won the last eight games against Brighton. The Sky Blues will dominate the ball and look to expose Brighton’s high defensive line. The False 9 seems to be to go to system for Pep Guardiola nowadays and he will look to continue the same. Both Potter and Guardiola play exciting and fluid football and this should be a thrilling watch.

The French striker has been clinical this season. He’s already notched up 4 goals and is Brighton’s talisman in front of goal. Potter will expect Maupay to continue his goal-scoring form to have any chance of beating Manchester City. He will also look to lead Brighton’s press as they will look to win the ball in City’s defensive half. Neal Maupay has an xG of 3.18 and has outperformed his expected goals tally.

There was criticism of him missing golden opportunities last season, but he seems to have found his shooting boots this campaign. He is getting into goal-scoring positions and is confident in front of goal. He is well on course to beat his highest tally of 10 goals in 2019-20 and is finally realising his potential under Potter.

Be it playing as a winger, a false 9 or even in central midfield, Foden seems to be performing at the highest level. He seems to be in the form of his life and is staking a claim of being Manchester City’s most important attacker this season. Against Club Brugge – Foden started as a false 9 but was given a free role. Naturally, he thrived in that position, dropping deep, distributing the ball to the wide areas before providing a gorgeous assist to Joao Cancelo.

He is expected to start in the same role and Pep will give him the license to drop deep and play freely. His performance against Liverpool was world class and he is growing with every game. He will be a valuable asset not only in this game but for years to come.