Brighton & Hove Albion released their 2020/21 campaign home kit on Sunday – right in time for the first use in their last game of the season against Burnley.

The home football shirt is made by popular manufacturing organisation Nike, and will be used during the 2020/21 Premier League season.

Brighton home jersey for next season takes a different dimensional from the usual traditional stripes and will appear in white colour with white pinstripes.

Bobby Zamora, who serves as an ambassador for the Seagulls, who spoke of the ‘stylish Fine Margins’ launch video said: “I love the new strip. I was surprised when I first saw it on the video shoot, but it looks absolutely stunning.”

The stripes however does not go across the American Express inscription on the front view of the Brighton home kit for the next campaign. The collar also looks to be buttoned, with the sleeve cuffs all coming in white while the Swoosh is golden, taking its inspiration from the 1983/84 uniform – which also possessed white pinstripes on a blue base.

The shirt is completed with white shorts as well as blue socks to match.

How impressed are you with the new Brighton & Hove Albion kits for the 2020/21 Premier League campaign? 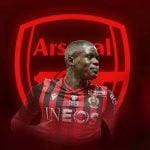 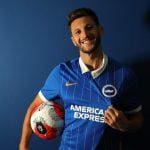