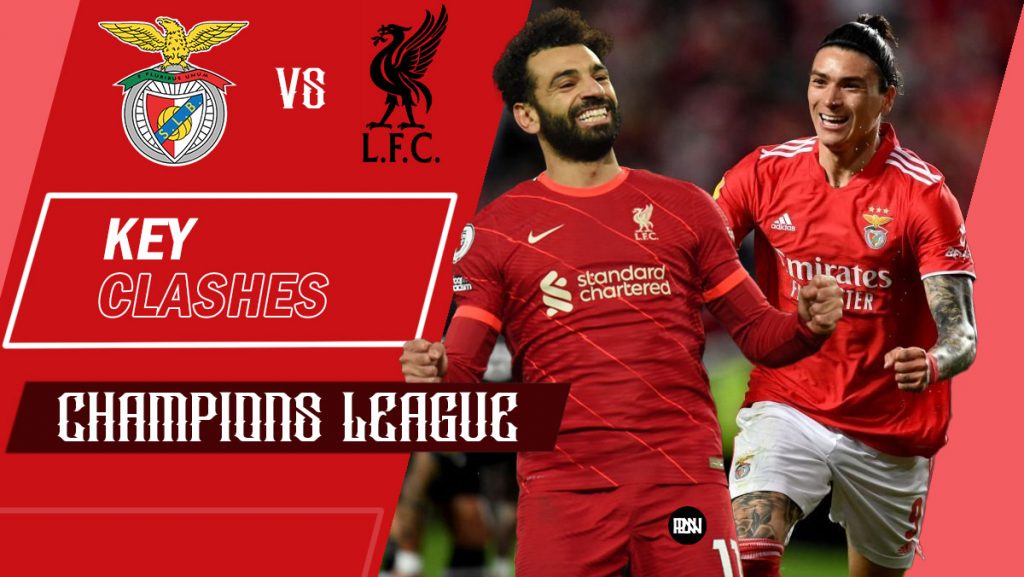 Now, the scheme of things just gets more spiced up as we keep on getting closer to the showdown – The Final. Quarter-Finals kick off on Tuesday and it is Benfica vs Liverpool over the 2 legged knockout stage. Fearsome teams, tend to provide fearsome individual battles within the tie itself.

The Reds travel all the way to Portugal to face Benfica, in the 1st leg of the Quarter Final between the 2 sides. As we look at some of the key player battles, leading up to the big clash.

The 26-year-old Brazilian winger, Everton Soares, has been one of the key players for the Portuguese outfit. While the player has had a great contribution towards Benfica’s good run of form in most of the games, he has also ensured a stable midfield more often than not. His stats might not sound that convincing compared to the other players playing at the same position, but his contributions to the side go way beyond just the mere numbers. Everton has scored 7 goals and has assisted another 7 goals in 41 games across all competitions for The Eagles.

Coming up against Liverpool’s assist machine – Trent Alexander Arnold – it could turn out to be a great clash between the two players. Meanwhile, Trent might look a bit jaded after getting a run in for the first time after pulling up the Hamstring injury. Yet, he has proved against all the criticisms this season, that he can for sure defend as well as he can attack. His stats are crazy too, for someone who make constant running shifts up and down the right side for Klopp’s side. The English fullback has assisted a mammoth 17 goals across all competitions and has even contributed for the Reds by chipping in 2 goals.

Concludingly, I think Everton’s sudden burst of pace could trouble Trent, who is currently recovering from the injury. Overall, it will be an amazing battle to watch out for.

The Barcelona reject, Spanish Left Back- Alex Grimaldo has been in sublime form this season for the Lisbon based club. Benfica has largely been benefitted from his overlapping runs beyond the midfielder and the opposition defenders. It is not easy to track the run of a player who plays as a passive attacker throughout the whole game. The 26-year-old has grown a lot since his Barcelona days and has been showing a great deal of his development here in Portugal. Alex has already contributed 14 goals for his side across all competitions. Wherein he has assisted 8 of those goals for his teammates.

From tracking back the runs of the wingers, to crossing, and sometimes making runs of his own in the opposition’s box. Alex has matured a lot. But, he will be against a player who has been lethal this season. Mohammed Salah has been beyond just a mere one-season wonder, that media and many pundits claimed him to be. This is the 5th year running that the Egyptian has scored at least 20 league goals in the Liverpool colours. It will be more than just a task for Grimaldo to track Salah’s runs, let alone keeping up with his twisting & turning dribbles.

The Egyptian has scored a total of 28 goals and has assisted another 10 goals for the season, in just 37 games- including 8 goals in the 8 Champions League fixtures so far. So, it is far more than a task Grimaldo could have asked for in a single game, but he could learn from the Reds’ last game against Watford where Hassane Kamara literally kept Salah in check. It is another battle that will be catching the eye of viewers around the globe.

Darwin Nunez – the Uruguayan striker, often referred to as a player to shares the abilities of both Cavani and Suarez, has broken all scoring grounds this season in particular. The 22-year-old prolific striker leads the Primeira Liga scoring charts with 21 goals in just 23 games. While, scoring another 4 goals in the Champions League, taking up the tally to 27 games. It is crazy how a talent like Nunez, is recognised so quickly in contemporary football. Enquiries from across Europe’s biggest clubs have been piling up for Benfica to gain the services of the Uruguayan, in the summer.

Not to mention his solitary goal in the 2nd leg of the Round of 16 against Ajax, that helped earn Benfica a spot in the Quarter-Final. Meanwhile, he will be left hanging upfront, all alone against a force to be reckoned with. Yes! It is, indeed, the Dutch wall- Virgil Van Dijk. I mean, did he even rupture his right anterior cruciate ligament at Everton last season?! To be honest, it does not seem to be the case. So far Van Dijk, alongside the company of Konate and Matip, has kept a total of 24 clean sheets across all competitions whenever he has played a game donning the Liverpool colours.

To come up face-to-face against someone like Van Dijk takes a lot of inner strength to go by. It is not just a matter of 90 mins, Nunez will have to face the giant in the Liverpool defence for a total of 180 mins, not to mention a few mins of injury time or even extra time One of the in-form strikers in Europe, who is just looking to score no matter the position or the opposition. Up against, arguably, one of the best defenders in the world right now. It, surely, is meant to spice up.