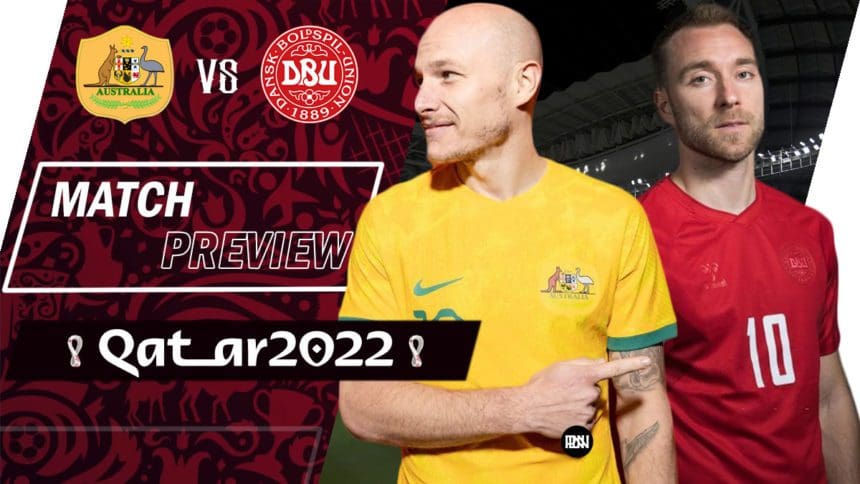 On Wednesday at the Al Janoub Stadium, Australia and Denmark will play their last 2022 World Cup group-stage game. Since France has already advanced from Group D, this contest is virtually a to-the-victor-belong-the-spoils contest.

Owing to their victory over Tunisia in the opening match on Saturday, Australia hold the advantage of entering into this match with two points lead over Denmark. Australia have just three World Cup victories overall, and this was their first since defeating Serbia in South Africa in 2010. However, even with that victory in 2010, they were unable to advance despite having four points, and if they lose tomorrow, the same thing would happen.

Though they have lost eight of their Eleven games against teams from the continent, they did achieve a draw 1-1 with their following opponents in the preceding World Cup in Russia four years ago, so there is cause for concern given their past performance versus European teams.

They have been solid starters in some of these finals, and it could help them in a stressful, possibly closely contested game here.

Australia grabbed the lead against Tunisia and France within the first five minutes of play, the latter of which marked the first time they had ever led at the half of a World Cup game.

They were quite happy to record their first tournament clean sheet since 1974, and if they can do it again, they would go ahead of Denmark. Given that the Socceroos only won one of their final seven AFC qualifying matches and had to win two playoff series in order to qualify for Qatar, it would be a tremendous accomplishment for them to advance.

Denmark, on the other hand, were dominant in qualifying, winning their first nine qualifiers with eight shutouts, but they now face the very real possibility of being eliminated very early.

Kasper Hjulmand’s team earned the most points in UEFA qualification, but if they suffer the same fate as they did against the Australians in 2018, they will be eliminated.

They can draw motivation from the fact that despite losing both of their opening two Euro 2020 matches, they were still able to advance to the semifinals owing to an incredible performance against Russia in their last group match.

Due to the fact that, unlike Australia, they have advanced above the group stage in four of their five appearances at the finals, past World Cup performance also provides grounds for hope.

However, they must break a five-game losing streak at the World Cup, as their most recent match against France followed a run of four straight draws.

Even though the Danes defeated Didier Deschamps’ team twice in the UEFA Nations League this year, encountering Les Bleus on the largest platform proved to be too much for them, as they suffered a well-deserved loss.

The absence of Hibernian attacker Martin Boyle, who tore his ACL just before the competition and will miss the remainder of the season, yet remains a significant one.

After suffering an ankle injury against France in the group opener, Nathaniel Atkinson was unable to participate in Australia’s victory over Tunisia.

The lone substitution for that game was Brescia’s Fran Karacic, who took Atkinson’s spot at right-back. Considering that the Socceroos won, manager Graham Arnold is not likely to make any other changes, injuries barring.

Mikkel Damsgaard was inserted into the lineup as a result of Hjulmand switching from a 3-5-2 formation to a 3-4-3, pulling a man out of midfield and playing the Brentford player out wide.

Thomas Delaney will forgo the remainder of the competition after sustaining a knee setback against Tunisia on matchday one.

In place of the ageing Simon Kjaer and Andreas Skov Olsen, whose playing time is being wisely managed, Jesper Lindstrom and Victor Nelsson were both introduced for the match against France. However, both players are expected to be reinserted.

With Denmark looking like a much more difficult test than Tunisia, the Socceroos can be expected to deploy their cautious 4-5-1 shape. They will be looking to absorb pressure, relying on Mathew Leckie and Craig Goodwin on the wings to create fluid counters.

Ex-Premier League player Aaron Mooy is essentially a deep-lying playmaker who is capable of playing dangerous long balls. This is where Mitchell Duke’s aerial ability comes in. He scored Australia’s winning goal against Tunisia with a superb header. In his last eight games for Australia, the 31-year-old has scored five goals, including four headers. The Socceroos may deploy him as a conventional target-man due to his skill at hold-up play and ability to prevail in aerial duels. Riley McGree has displayed offensive danger for Australia and plays a significant role in their high pressing.

Meanwhile, for Denmark, a 3-4-3 looks like the most appeasing option. The Red and Whites start the game as huge favourites over Australia. The team is expected to dominate this matchup thanks to their elite midfield pivot, which consists of Pierre Emile-Hojbjerg and Christian Eriksen, with the latter at the centre of every Danish attacking play.

The front three have rarely enjoyed any action with the side’s only goal coming from centre-back Andreas Christensen. An alteration could be on the cards with the out-of-form Andreas Cornelius being replaced by Kasper Dolberg.

It’s a marvel that Christian Eriksen, who suffered a cardiac episode at Euro 2020, is returning to his peak form and travelling to Qatar. The playmaker, who had a strong start to 2022 with Brentford, has already established himself as a crucial player at Manchester United under Erik ten Hag. He is also the main creator for the Red and Whites.

In the past several years, Pierre-Emile Hojbjerg has developed into a true leader for his club and nation. Following a stellar start to the season with Spurs, he has approached the World Cup in top form. The only worry Hjulmand might have is that he hasn’t had much of a rest so far and might become weary of the competition as it progresses. 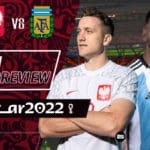