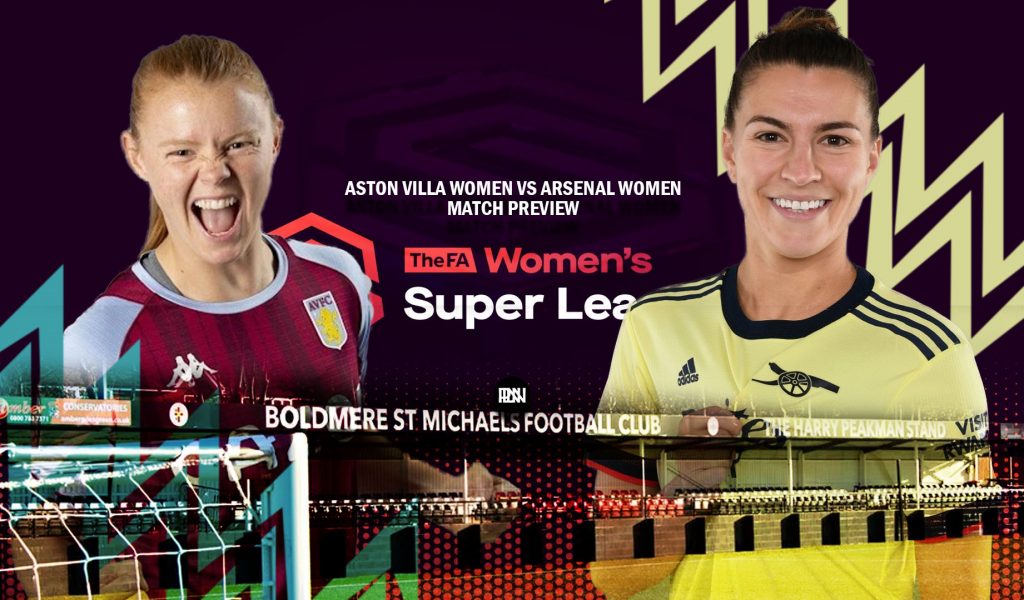 Arsenal Women and Aston Villa Women will go head to head on Saturday, with the former looking to make it 4 wins out of 4 in the WSL. The Gunners have started the season well, with Arsenal sitting at the top of the WSL table, progressing to the FA Cup semi-finals and crucially, getting to the group stages of the Champions League, after missing out on participation last season.

Aston Villa have also had a good start to the season, with the midlands club gaining 7 points in their opening 3 games. The Villans will be welcoming Mana Iwabuchi back to the Trevor Brown Memorial Ground after the Japanese international left the club to join Arsenal in the summer.

Jonas Eidevall will be looking to continue from where he left off, with Arsenal’s last WSL match being a 5-0 win against last season’s runners-up, Manchester City. With a 5-1 win against rivals Spurs, Arsenal could extend their unbeaten run to 18 against Villa.

Carla Ward’s side have little to worry about, with wins over Brighton & Leicester signaling good things for the Claret & Blues. And with Emily Gielnik scoring her first WSL goal last week, more are sure to follow.

The last time the two met was in May, where Aston Villa and Arsenal traded blows but ended up in a 0-0 draw. The result meant that the Villans were staying in the WSL for another season and put them above rivals Birmingham.

Both Simone Boye and Malin Gut are unavailable due to injury, however, Boye could be returning soon. No injuries are prevalent for Aston Villa.

Arsenal are one of two teams yet to drop any points in the WSL, with rivals Spurs not wanting to be outshone. However, the Gunners are currently sitting at the top of the table, with an astounding +10 goal difference. With 20 first-team players currently fit, Jonas has a hell of a selection on his hands.

When asked about how Villa have started the season, manager Carla Ward said, “We addressed what we felt was the reason we’ve been starting slow. Off the pitch we had to adapt and amend a couple of things. We also changed a couple of things in our gameplan, we wanted to get on the front foot more and get in their faces.” But with a fully fit Arsenal squad up next, could they receive their first loss of the season?

Remi Allen has started the season well for Aston and is currently joint 4th on the WSL top scorers list. A player with experience in the WSL, Remi will definitely be needed in order for Aston Villa to create chances and goals. With a npxG (non-penalty expected goals) of 0.67, Remi Allen is in the top 5% of goals scored by wingers/attacking midfielders. With those stats, you can expect the former Leicester City player to have a shot from 30 yards out.

After picking Vivianne Miedema as my key player for the match against Spurs despite the striker not featuring, I feel like my pick this week needs to be good. Leah Williamson has started the season on fire for both club and country and will do so again on the weekend. A brilliant player with the ball at her feet, Leah has the capabilities to spray the ball all over the field from center back, and that may become a vital asset for Arsenal against an assured Villa backline. It’ll be interesting to see (especially with Viki Schnaderbeck’s return to the side) whether Leah is positioned in a defensive or central midfield role more frequently this season. As mentioned earlier, Leah Williamson is playing in defence, but her passing range and accuracy are of the level a midfielder requires. In the last year alone, Leah Williamson has averaged 7.96 progressive passes per 90 and also 7.35 progressive carries, which is exceptional even if you aren’t aware that the average for both stats are 3.41 and 2.97, and that’s for midfielders.