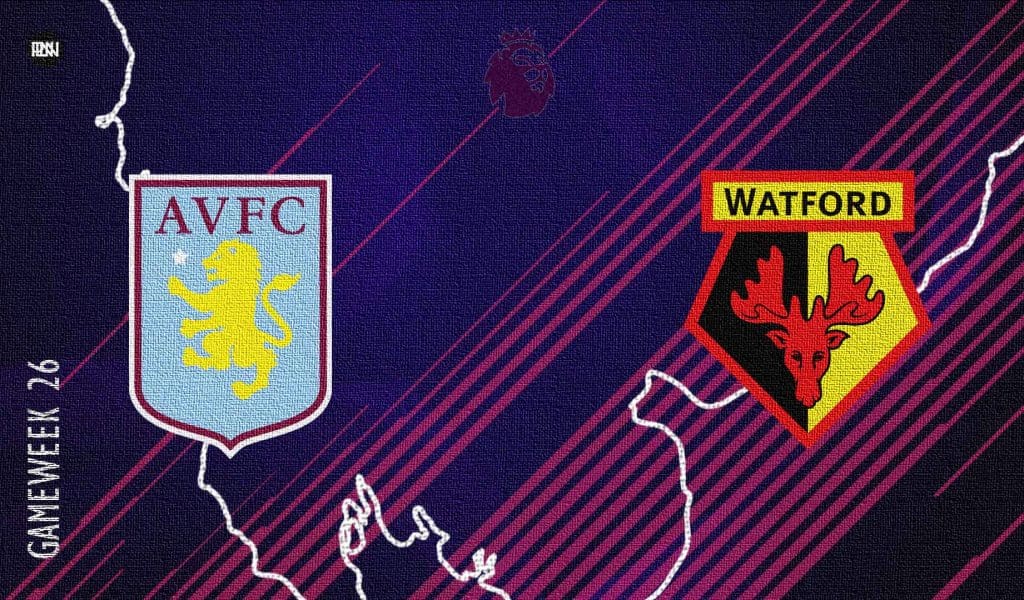 Matchday 26 of the Premier League season is here, and it has for us some very exciting clashes. With the relegation race heating up, every point is crucial for those teams from now on. This week sees relegation-threatened Watford visit Birmingham as they look to take on Aston Villa.

Aston Villa are in a bit of poor form right now, winning only one of the last five games in all competitions, and only winning 3 of their last 10 games in the Premier League. The arrival of new manager Steven Gerrard was met with much optimism and enthusiasm from the Villa faithful, and although their playing style has slightly improved from early in the season, the results have not been flowing for the West Midlands club. Their form was called further into question after they lost to relegation candidates Newcastle United last week, thanks to a brilliant free-kick from Kieran Trippier. The new signings of Philippe Coutinho and Lucas Digne has added more threat to the Villa side, and Gerrard will be hopeful that the Brazilian can return back to his form after a blip at St. James’ Park. This time around they face another relegation candidate, and the Hornets will be desperate for a win to escape the bottom three. Villa have another opportunity against weaker opposition to boost their confidence and get some much needed three points.

Watford had a decent start to the season, but a run of 11 games without a win, including 9 losses has left them in 19th position and has seen yet another change of manager, with Roy Hodgson replacing Claudio Ranieri, who in turn had replaced Xisco Munoz after 8 games in the league. However, neither appointment has seen an upturn in form for the Hornets, and they have been further pushed down the table, with the resurgence of Newcastle United and Norwich City. The Hornets sit in 19th position, with 15 points, and six points off 17th placed Newcastle. Watford were thoroughly dominated and outplayed by Brighton in their 2-0 defeat last week, with the Hornets failing to come up with an answer for the Seagulls’ fluid football. That defeat meant that Watford have failed to score a single goal now under Hodgson’s reign. Their performances have been timid and uninspiring, and it seems unlikely now that Watford can pull off an escape from the relegation zone.  They face another tough test against Villa this Saturday, and the fans will be hoping they can witness a miracle win on the road.

Aston Villa will be without the suspended Ezri Konsa, who was given a straight red card against Leeds United. The defender has already missed one against Newcastle and will miss two more games, starting from Watford. Midfielder Marvelous Nakamba is set to miss out Saturday’s game with a knee injury, as he joins forward Bertrand Traore on the treatment table, who himself has been suffering from a hamstring injury. After last week’s defeat, there are reports that Gerrard could change his lineup with one or more surprise inclusions in the starting lineup.

Watford have a few injury concerns of their own, starting with midfielder Peter Etebo. The midfielder is a huge doubt ahead of the trip to Villa and might face a late fitness test. However, defender Nicolas Nkoulu and forward Kwadwo Baah have been ruled out with a thigh injury and ankle fracture respectively. Exciting young forward Ismaila Sarr will be expected to come back into the starting 11 after being left out by Hodgson in their last game. It remains to see who the Senegalese winger will replace in the attack.

Time is running out for Watford, with only 15 matches left to play. The Hornets’ own poor form coupled with a good run of games for their relegation rivals has made their life extremely difficult, and they are now staring at yet another relegation, their second in the space of two years. Burnley have two games in hand over Watford and are just a point behind, which also does not bode well for them. It has been another season with the same story of changing managers in a short space of time, and not seeing the results. The Hornets fans have been frustrated with the lack of commitment and passion shown by the players on the pitch, and the players will be desperate to win soon to get the fans back on their side.

They meet a Villa side who also had a change in leadership recently. Aston Villa started well under Gerrard, winning four of their first six games. However, their fortunes have changed since, winning just one of the last seven games. There has been a general feeling of excitement around the club this season, with the departure of talisman Jack Grealish in the summer followed by the arrival of a few new and talented faces. Emiliano Buendia, Danny Ings and Leon Bailey all arrived in the summer, while Brazilian forward Phillipe Coutinho and defender Lucas Digne were signed in the winter, to boost the squad. On paper, the Birmingham club have one of the best squads in the league, and more was expected from them. Now the club sits in 12th, all but away from the European spots and will have to contend themselves with challenging for a spot in the top half of the table.

Both clubs now are now yearning for a win, and it points towards a very open game on Saturday. Watford can no longer afford to be cautious, and they need to go after the three points with a lot of firepower. Aston Villa will no doubt be disappointed with where they are now and will look to make amends for it starting now. Both teams have a leaky defence, and we could see a few goals at Villa Park. Villa’s poor defence and injuries will give Watford some hope, and the Hornets need to capitalize on every opportunity available to have any ambition of escaping the bottom three.

The talented Brazilian, widely known as ‘the Little Magician’, is no stranger to the Premier League, setting the league on fire during his time with Liverpool. His performances with the Reds brought the attention of Spanish giants Barcelona, who paid a record £142 million for the forward in 2018. However, the move did not quite work out for both parties, and Coutinho failed to recreate his magic at Camp Nou. As a result of poor displays, he was loaned to Bayern Munich in the 19-20 season, helping the Germans to a treble. He returned to Barca the following season, playing occasionally until late December when he suffered a season-ending injury. Since then, the Brazilian has been in and out of the squad, and frustrated with the lack of playing time, joined English club Aston Villa on loan in January of this season.

He made an instant impact at Villa Park, scoring on his debut against Man United, as Villa fought from 2 goals down to earn a point. He carried that form into the next games, assisting twice and scoring one in the game against Leeds United. Coutinho did not have the best of times against Newcastle in the last game, but former teammate and now manager Steven Gerrard has called on the Brazilian to show his talent in the upcoming games. He is always a threat when afforded time and space on the ball, and he has an eye for goal from in and around the box. Watford will look to close down the forward as quickly as possible.

The young forward has been the Hornets’ shining light in a season of gloom so far, with 8 goals and 5 assists in the league, making him the leading goal contributor for the club. He impressed when he played for Club Brugge last season and has impressed again in difficult conditions with Watford this season.

The 24-year-old striker has wonderful dribbling skills and has the pace to beat his man easily. He has cemented his status as one of the most important players in the team and has shown his talent, despite doubts earlier about his attitude. He has put in brilliant performances and is currently their most in-form player.

Dennis will be key to Roy Hodgson’s men and their performance against Villa on Saturday, and he has shown his class since the beginning of the season. He has a chance to get a goal or two against a weak Villa defence, and his form in front of the goal will be crucial for the Hornets if they want to secure three vital points away from home.