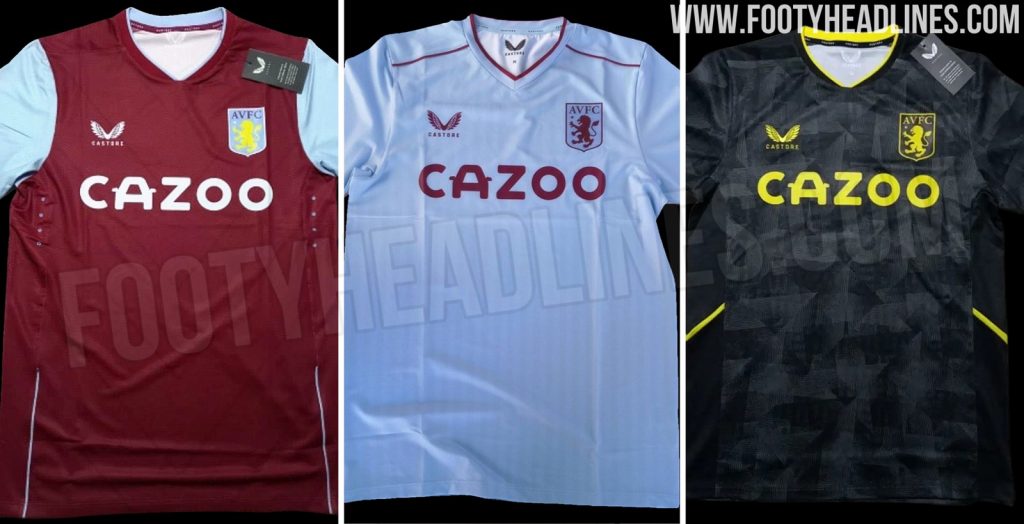 Aston Villa moved on from their kit partnership with Kappa and have officially tied up with British kit manufacturer Castore. The Manchester based kit designing and manufacturing company have signed a multi-year partnership deal with Aston Villa as an official kit partner.

Aston Villa home kit design is kept pretty much basic. It includes all the elements that represent Aston Villa. The main body of the kit takes the iconic claret color and the sleeves are dyed blue. This has been a combination Villa has kept since the club’s birth.

Following the same old tradition, the 2022-23 Aston Villa home kit contains a signature V-neck collar along with a thin blue border around it keeping the look elegant. The club sponsor’s logo (Cazoo) is nicely printed in white which will likely be the color of players’ names and numbers on the back.

Four dots below the armpits and a vertical thin white line below them on both sides divide the kit between front and back.

Aston Villa way kit has blue as its primary color covering most of the kit. Following the pattern of the home kit, this kit also is kept solid in design. This kit to comes with the signature V-neck along with a claret border on top of it. Griff of the sleeves too contains a claret border which gives this kit a symmetric look and decent aesthetics. A horizontal line on the shoulder separates the back and front of the kit. 2022-23 Aston Villa away kit manufacturer and sponsor’s logo is printed in the traditional claret which means the players’ names and numbers will also be printed in the same color.

Aston Villa has had a history to have blue color in away kits. Including last season, Villa donned blue away kits in the 2008-09 season. Looking at kit designs and color combinations for next season, they look majorly influenced from the designs Nike had during their partnership with Villa.

The last time Villa donned such a simple kit was in the same season in which they finished 6th in PL and played a cup final at Wembley.
With Villa looking like an improving side from the last season, they look to earn more success under the management of Steven Gerrard and players like Coutinho, Cash, Luiz and Martinez will definitely aim for a higher finish to fancy their name as top players in English league.

Aston Villa third kit for the upcoming season looks much more modern in comparison with their home and away jerseys. Castore decided to go with black as a choice of color for the 2022-23 Aston Villa third kit. This kit unlike the other two has a design pattern on the abdomen area. It has a tonal-like pattern of black and charcoal color which seems a nice patterned combination for the kit. Best thing about this kit is the symmetry around the collar and sleeves along with yellow-coloured club badge. Same yellow color is carried by Castore and Cazoo’s logo on the front of the kit. A stripe on the side of the abs and a solid black below the armpits beautifully separate the sides of the kit.

Goalkeeper kits are kept really simple without much creative complexities and effort in it, which makes sense as these kits rarely bring huge sales. A fluorescent orange being the primary color in a home variant of this kit, while Yellow dominates the away variant of this kit. Both kits contain the same design, which is pretty much solid and a black & primary-coloured combination on the collar as well as sleeves. A thin diagonal line on the lower armpit mainly separates the face and back of the kit with 4 tiny black dots just below the armpit being the added difference in the yellow kit.

The club badge contains the primary colors of respective kits and the logos and sponsors’ names are printed in black. 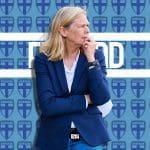 Finland Women recently announced their Euro 2022 squad, so can they take everyone by suprise?
Next Article 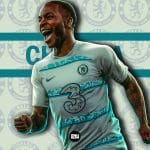 Raheem Sterling to Chelsea: Does it make sense?
Leave a comment