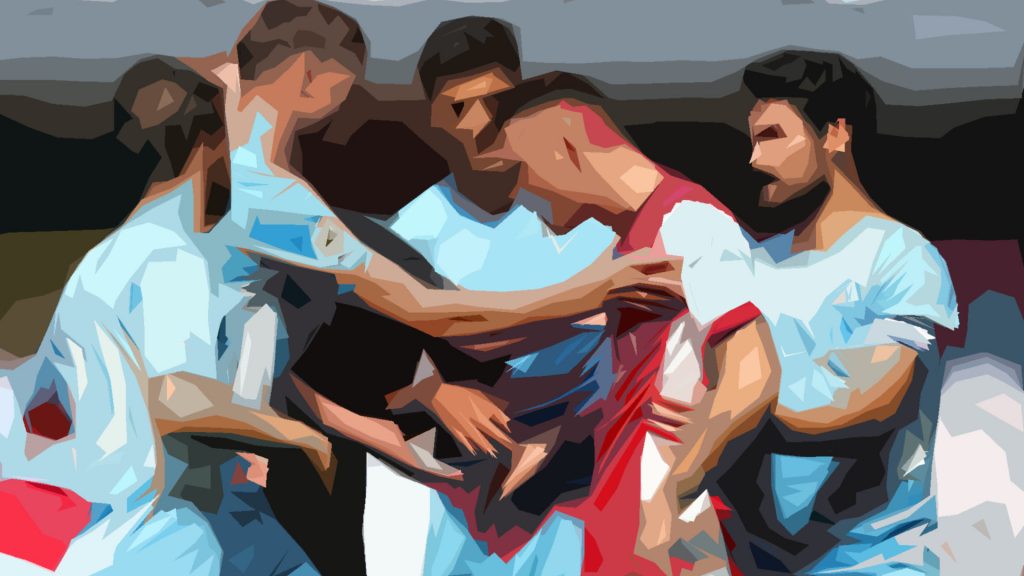 Arsenal fans endured one of the most humiliating encounter against Manchester City. The result and quality shown during the Carabao Cup tie on Tuesday against West Brom gave a misleading hope of what might be expected from an Arsenal side that has the pedigree of producing an astonishing result when everyone least expected.

With the return of Aubameyang and Odegaard starting their first Premier League game this season, the match looks to be an open encounter for both teams. Though Arsenal were missing some regular starters like Nicolas Pepe, Ben White, and Thomas Partey to injury and illness respectively, but the manner in which the team conceded two goals in the early minutes of the game was nothing short of an embarrassment.

The three goals conceded in the first half were avoidable, schoolboy errors from Chambers and Cedric. Both players were guilty of failing to close down Gundogan, Ferran Torres, and Gabriel on different occasions, which led to two goals deficit within the first 12mins of the game, while the third goal was conceded at the 43rd minute of the first half.

In the 35th minute, Xhaka was given the marching order, as his reckless two-footed sliding tackle against Joao Cancelo resulted in a straight red card and that seems to compound Arsenal’s misery.

Nothing much could be said after the break, as Arsenal continued to be second fiddle, leaving too much space in the midfield, allowing Manchester City players to get the ball to their attackers quickly, beating Arsenal’s press like it never existed. Arsenal once again conceded another two goals in the 53rd and 84th minutes, ridiculing the Gunners with five unreplied goals, while keeping a clean sheet against a supposed top team like Arsenal. The Gunners were able to muster just a shot while City had 28 shots at full time.

Manchester City dominated the match in all areas. They had an impressive 905 touches as against Arsenal’s 318. The City had 14 corners while Arsenal couldn’t get any. They had 10 shots on target while the Gunners couldn’t get their lone shot on target. With the possession favoring Manchester City with 80.9%, it’s obvious that Mikel Arteta’s team are still far behind the level required to be considered a title challenger.

The German stopper conceded five goals, but couldn’t be blamed for any of those goals, in fact, City could have easily scored more if not for his interventions.

Kolasinac’s positioning and lack of awareness was often exposed, considering how often and seamlessly the City players were able to run in behind the Bosnian. Though the role he played wasn’t his primary position he could have done better to be more conscious of his surrounding.

Like his mates, Holding literally had an abysmal performance. He was surprisingly not positioned enough to clear the ball which allowed Ferran Torres to nod in his second goal of the game. His partnership with Chambers and Kolasinac was as porous as a sponge.

Chambers had little to do to stop City’s attack. He was as exposed on numerous occasions and couldn’t impose himself on the attackers. Notably, he was at fault for allowing City’s record signing Jack Grealish the luxury to walk his way into the box before assisting Gabriel Jesus goal.

Tierney was mostly isolated whenever he burst forward with the ball. He was often closed down as there were less support from his teammates. Like his fellow defenders, he was guilty for allowing City to take advantage of his position twice, with Gabriel Jesus and Riyad Mahrez creating an assist from there.

Jack Grealish would wish he had such an opponent throughout the season. He was easily deceived out of position and was constantly beaten at ease. Cedric couldn’t cope with the pace, trickery, and movements around him, losing concentration and energy.

Though he lasted for just 32 minutes on the pitch, Arsenal were already trailing with two goals before he was sent off by Martin Atkinson after his rough challenge on Joao Cancelo. In his brief moment on the pitch, he found it difficult to control the midfield likewise was he able to make any notable impact.

The energized midfielder showed glimpses of brilliance on few occasions. He could be seen moving the ball with purpose but being let down by his teammates’ lack of willingness to show some passion. He constantly finds the right space, moves the ball into the right channel but had no support nor options to pass to. And he was quite unfortunate not to have scored a goal after trying to deflect Ederson’s clearance.

Just like Smith Rowe, Odegaard played some fine passes and was obviously driven to make a difference but he had little options nor support, he was often hurriedly closed down and bullied off the ball. He couldn’t connect with other attackers neither was he given much space to room until he was substituted for Maitland-Niles in the 71st minute.

Bukayo Saka was often out-muscled and closed down. Like the majority of his teammate, he was more involved in chasing the ball around, trying to block City’s movement, especially when they attempt to play out from the back. Saka only lasted for 45 minutes as he was eventually replaced with Elneny at the start of the second half.

Aubameyang was more like a journeyman till he was substituted for Lacazette in the 59th minute. He had very few touches and couldn’t get a chance on goal. He was intelligently deprived of any services neither could he pose a threat to City’s defense.

Maitland-Niles was subbed on in the 71st minutes but couldn’t do more nor less in his brief cameo. He was often chasing after City players, trying to close down the channels to deny City from penetrating through the midfield.

Lacazette could be seen dropping deeper into the midfield trying to win the ball, showing some fighting spirit but had little time to impose himself with the match already won.

Elneny came in during half time replacing Saka, but couldn’t make any meaningful impact as the midfield was still has porous as it was before his introduction.