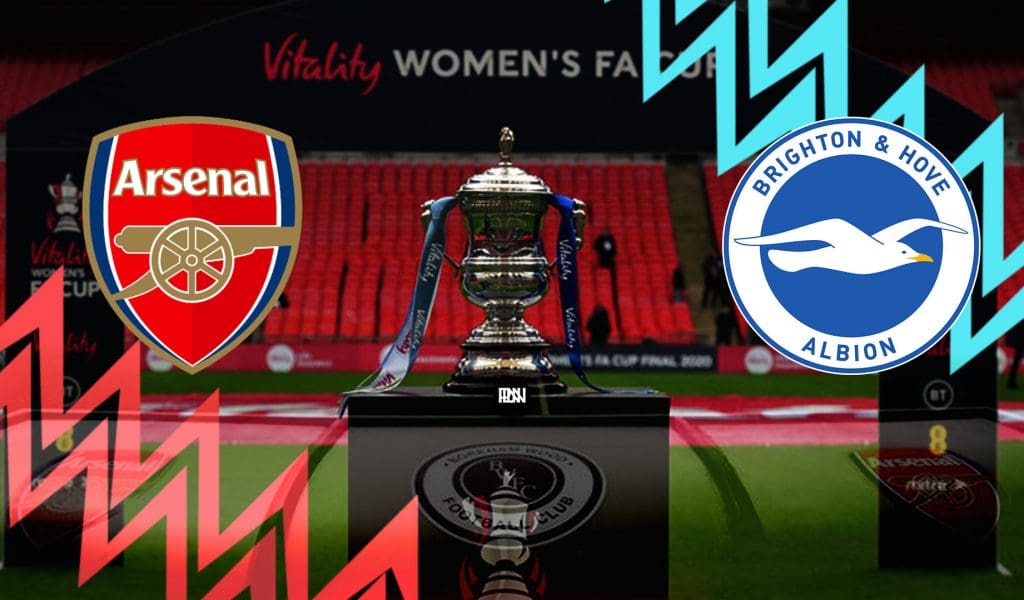 Arsenal Women will go head to head with Brighton & Hove Albion Women as their first matches after the international break. They will face each other in last year’s edition of the FA Cup, as the competition was cancelled last year due to the Coronavirus pandemic. However, the tournament was rebooted, and these teams will try to stake a claim to be in the finale.

Arsenal have been amazing so far, with the Gunners beating North London rivals Spurs 5-1 in the quarter-finals, thrashing Championship side Crystal Palace 9-0 in the fifth round, and also beating Gillingham 10-0 in the fourth round, which was their opening fixture in the competition. They have also kept up form throughout this season, winning every match apart from one.

Brighton have had a more rocky route to the final, with the Seagulls narrowly beating then WSL side Bristol City 1-0, but things became calmer as they beat FAWNL side Huddersfield Town 6-0 in the fifth round. Their most recent fixture in the tournament was a 1-0 win against Championship side Charlton. Many have said that Brighton have had an easy tournament so far and that they haven’t faced any good sides, but hey, you can only beat what’s in front of you.

Jonas Eidevall will be able to mix and match partnerships, and we should expect the likes of Anna Patten and Viktoria Schnaderbeck to get some minutes. Also, some of the youngsters could come on if the scoreline is in Arsenal’s favour late on, which should be interesting to see.

Hope Powell will be looking to play her first 11 against a team as strong as Arsenal, but it may be difficult for them due to the international break. She’s facing a top team with outrageous depth, and she knows this, which is why a top performance is needed from her side.

Malin Gut is unavailable for the Gunners due to a long-term injury.

With Brighton being a weaker team than Arsenal, Jonas Eidevall will have nothing to worry about, except complacency creeping into the Arsenal dressing room. Jonas is good at rotating at winning without key players; an example of this was the quarter final against Spurs. In general, Jonas Eidevall has impressed fans. Apart from an inevitable loss against European champions Barcelona, he has won every single game. The football he’s playing has been interesting at worst and captivating at best, and the fact that the results are coming with him shows that he will do well at Arsenal.

Something that people need to remember is that both teams can have their strongest teams out, so Brighton can take them by surprise too. Before the break, they were looking to continue their run, as they beat Tottenham and Birmingham, before having to chill for 2 weeks. The Seagulls will look to take the match by the scruff of the neck, and it could benefit them.

Mana Iwabuchi is likely to start this match, after playing in the quarter-final against Spurs but not only that, she played well, scoring a beautiful individual goal from outside the box, and also having a good all-round game. She is a brilliant and technical winger who can also be the creative spark in the midfield if necessary. So far she has scored 2 world-class strikes for Arsenal, and I’d be betting on her to get another.

Danielle Carter is a brilliant striker and has been alright for Brighton this season. She has scored 2 goals in 5 WSL matches and will look to build on that. Carter will be facing her old team in the name of Arsenal, as she stayed with the Gunners for over 11 years. The England international has proved her class before, and will again for Brighton, especially considering her age (28).