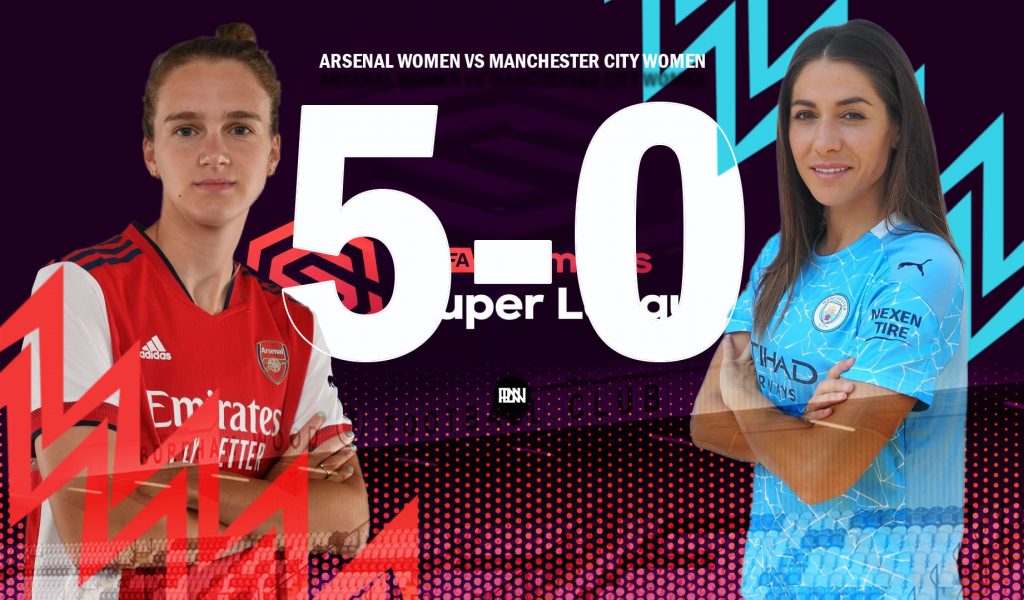 Two of the country’s best went face to face on the football pitch, with Arsenal Women beating Manchester City Women 5-0 on Sunday evening. Find out more in the match report below.

Arsenal will be looking to exploit Man City’s defence being weaker than usual (saved by the fact that Alex Greenwood recovered from injury in time), and with Alanna Kennedy not being extremely convincing in her first 2 matches, it will be a real tough test against one of the best in the world in Vivianne Miedema. With Ellen White misfiring recently, it’s interesting to see that she starts the game ahead of Khadija Shaw.

Former Arsenal youth star Ruby Mace remains on the bench despite Man City’s aforementioned defensive problems. With the 18-year-old seeming to be 4th or 5th choice center back, and even with injuries in the side not starting, will she be wishing that she had stayed with the Gunners tonight?

It’s Vivianne Miedema!! A mess up at the back from City means that Beth Mead was practically given the ball, and she passes it to Viv who turns, and despite looking like she was trying to shoot into the top left corner, fires it into the top right. And Arsenal have taken the lead at Meadow Park.

Arsenal double their lead! Kim Little receives the ball on the edge of the box from Miedema, and with 3 defenders attempting to tackle her, she loses and smashes it towards the top right corner, and Benameur can’t save it.

A fantastic first half for Arsenal, with the Gunners being better than Man City, despite the Sky Blues having slightly more possession.No substitutions from either manager, but many will argue that Man City need to change something, anything because Arsenal have the goals.

Katie McCabe makes it 3! A long ball is controlled by McCabe, the City defenders get back, but with a few lucky bounces, she smashes it into the top left corner. You’d think it’s game over, with Man City are 3-0 down in Hertfordshire.

It’s a second for Kim! A penalty which was earned by herself after being tripped up in the box (she does have very fancy footwork), she places far beyond the goalkeeper’s reach and into the top left corner. Things get even worse for Man City with the scoreline reading Arsenal 4, Manchester City 0.

It’s getting humiliating now. This isn’t Arsenal beating Reading or Birmingham City by this margin, It’s Manchester City. A great header from Lotte’s cross (not Maritz or Foord) by Leah Willamson means that Arsenal are ahead by 5 goals now, with the clean sheet not in any danger of going missing.

Wow. It’s another statement performance from the Gunners which puts them top of the league, and both their main title rivals have now both dropped points against Arsenal, and Jonas Eidevall won’t be in a rush to drop points anytime soon. But you really have to start worrying for Manchester City, and think, is their title challenge over before it even started.