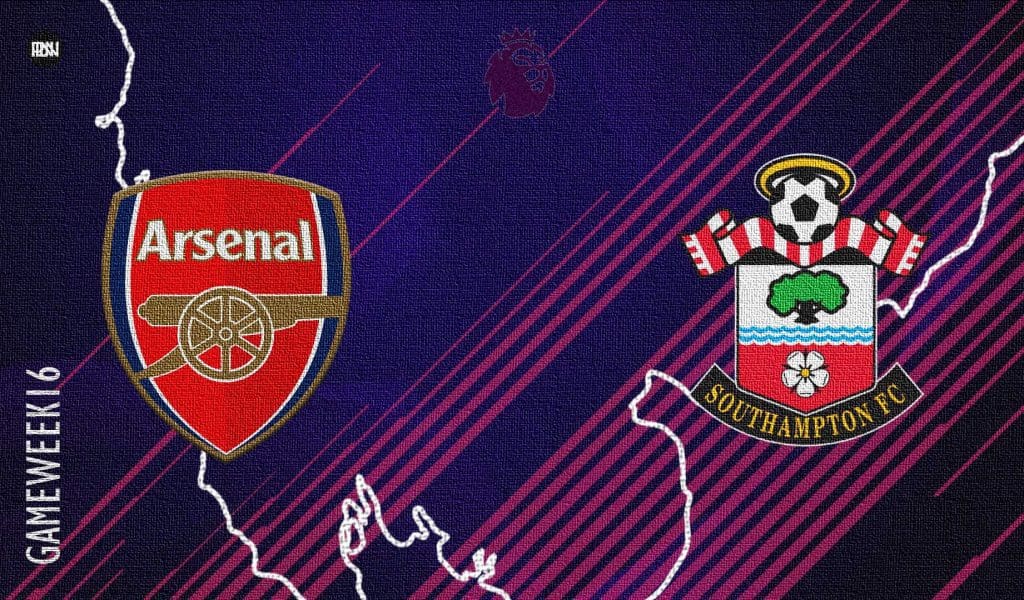 The Premier League is perhaps at its very best right now. The Top 3 are only separated by 2 points, while 7th placed Arsenal are only four points away from 4th placed West Ham. To put it into perspective, 12th placed Everton are closer to the relegation zone than they are to the Top 4. But everything could change again this weekend, most of all for Southampton and Arsenal.

The Gunners could come within a point of the Top 4, while a victory for the Saints could see them enter the top half of the table. It might just come down to who wants it more on the day.

Questions are being raised again about the process Mikel Arteta is asking the Arsenal fans to buy into. They suffered through a torrid campaign last year, and it was all going downhill this season too when they lost their opening three games. However, since then, they defeated the teams they should have and reached within touching distance of the UCL spots. But they have only picked up 1 victory out of the last 4 games. The defeat to Everton was disastrous, but it was always coming as they shot themselves in the foot by not managing their possession well. The supporters are understandably frustrated. Arteta and Edu had asked to be judged once the players they signed took to the field. Now that they have, it has become hard for them to topple the big teams or any side that forces the narrative against them. Another area of concern is that the Spanish boss struggles to coach an attack. His basic style of play is sound and the principles are well-followed but he is yet to churn goals out of his frontline. The mismanagement of Alexandre Lacazette, Eddie Nketiah, Pierre Emerick Aubameyang, and Folarin Balogun are evidence of it. It is also alarming that the 39-year-old boss is yet to sign a centre-forward. It is no surprise that the Gunners are the 9th lowest scoring side in the league, with teams like Crystal Palace, Brentford, Aston Villa, and Watford ahead of them. The difference between these sides is that of an experienced coach. Arteta is continuing to learn on the job, and this is never going to work. He now has a chance to take some pressure off by defeating Southampton on Saturday. But the Saints have been good against top opposition this season and love playing against teams that squander possession. It is not make-or-break yet, but the Spaniard is sure giving a lot of reasons for the hierarchy to ponder over his permanent appointment. Manchester United have already changed their manager, and the next change could be in North London if the results do not improve soon.

Ralph Hasenhuttl is a great coach, but his selection choices are sometimes awfully wrong. Quite contrary to Arteta, he explains how he wants his sides to defend, win the ball, and attack. There is no doubt that they have enough defensive resilience to keep out the top-sides and are more than potent in attack to hurt the clubs in the top half of the table. Yet the inconsistencies have come out of injuries and the kind of choices the Austrian has opted for at times. Armando Broja and Adam Armstrong are the most lethal forwards at Southampton. But the attacker hogging the most minutes this season has been Che Adams. The Scottish striker has been good, but none of his qualities are outstanding. Armstrong, on the other hand, has the pace to beat most defenders while Broja possesses killer instincts in front of goal and is an aerial threat. The two could actually flourish alongside each other, but their partnership has rarely been employed. Romain Perraud has also been one of the finds of the season, thanks to his incredible dribbling ability and eye for a pass. Yet, somehow, he has only featured 7 times this season. These choices have cost the Saints a place far higher than the table. Thus, Hasenhuttl shall have to nail his selection when he visits the Emirates on Saturday. The Gunners are threatening, but their bite is not as vicious as their bark. However, Southampton have capitulated at times and have lost the ability to stay in games and nick a point or maybe three in the final 15 minutes. They shall need to work on this, and Arsenal are there for the taking. Moreover, the home fans will be on their team’s case throughout the afternoon, and if they can frustrate Arteta & co for a good while, they stand more than a chance to pick up all three points.

The Gunners shall go into the game with a minor injury concern of Emile Smith Rowe. The Englishman had picked up a knock recently and will face a late fitness test on Saturday. Bernd Leno is also a doubt due to a groin injury while Sead Kolasinac shall be out until January due to his ankle issue. Gabriel Martinelli is fit and shall be in contention for the weekend fixture after coming off against Everton on Monday night.

Thus, it is a pretty fit squad, and Mikel Arteta shall be hoping to get back to winning ways.

Ralph Hasenhuttl has quite a lot to worry about ahead of facing Arsenal. Che Adams is a doubt for the game after the Austrian gaffer revealed that the attacker stopped in training yesterday, and the medics shall need to assess his situation. Stuart Armstrong will continue to be out for the Saints, as he was last weekend. Goalkeeping duo Alex McCarthy and Fraser Foster have also been ruled out due to injury. Mohammed Salisu and Oriel Romeu shall be unavailable after the duo picked up their fifth yellow cards of the season against Brighton last weekend and will now face a one-match suspension. Jan Bednarek, however, shall return for the game after being ruled out for the game against the Seagulls last Saturday.

Thus, they do have quite a few issues but are still worthy of handing an upset to the Gunners.

Could Arsenal whitewash Southampton at the Emirates?

The Gunners have failed to step up in recent weeks. Defeats against Liverpool and Manchester United were taken with a pinch of salt, but after Everton completed a come-back last weekend, it would have set off alarm bells for Mikel Arteta. The Spanish boss is aware of the deficiencies in his side and would be hoping for a complete performance against the Saints on Saturday. Pierre Emerick Aubameyang could be handed a start as the Gunners have looked far more fluent with him in the side this season. Bukayo Saka and Martin Odegaard have been in good form but will need to kill the game off and not rest on their laurels after taking a lead. Thomas Partey was awful in the centre of the pitch against the Toffees and shall need to control the possession rather than making silly mistakes. There is a lot of potential in this Arsenal side, and it is time they live up to it on a consistent basis.

Southampton to press Arsenal high up the pitch?

Arsenal have been found guilty of making mistakes while playing out of the back this season. The recent stutter in the performances of Thomas Partey is just one of the reasons for this blip. The Saints could use this to their advantage by pressing high up the pitch. Hasenhuttl has able runners in Adam Armstrong, Nathan Tella, Nathan Redmond, James Ward-Prowse, while the full-backs are also hard-workers. Ward Prowse, in particular, has been brilliant in winning the ball in dangerous areas. However, they will also need to ensure that they are clinical and punish the Gunners for their mistakes. Southampton have quite a few people out with injury, and it would be a statement victory if they can seal a win without some of their main stars.

The Swiss star was out for a couple of months, and the difference could be seen. The victories were not as convincing, and Albert Sambi Lokonga found it a tad hard to cope with the intensity of games. Mohamed Elneny, on the other hand, struggled to cover up the ground and act as a box-to-box midfielder. Thomas Partey has also looked shaky in recent weeks, most notably against Everton on Monday night. Thus, the return of Xhaka has been vital as he was the most vital Arsenal player against the Toffees. His ability to retain the ball and control possession shall be key on Saturday, and he shall need to win the midfield battle against James Ward Prowse. The Gunners stand a chance to get close to the Top 4 with a victory and their ex-captain could be the difference-maker on the weekend.

The Albanian centre-forward has been in great form since he arrived from Chelsea on a loan move. His goal against Brighton last Saturday was his 3rd of the season after being afforded less than 700 minutes of action this season. He was wasteful in front of goal in the beginning but has found himself in dangerous areas to hurt the opposition in recent weeks. The Gunners struggled to deal with Richarlison on the weekend due to the Brazilian’s stature and ability to use his body effectively. Broja could produce something similar, especially since he is nearly 6’3. Ben White and Gabriel Magalhaes are strong in the air, and Broja shall need to win the first ball and help out Adam Armstrong in the attack in the potential absence of Che Adams. The 20-year-old would also love nothing more than to lodge a dent in the Top 4 hopes of Arsenal, given his parent club’s rivalry with the side.