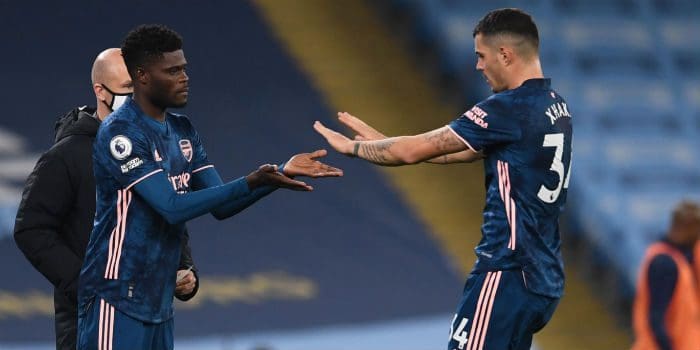 Thomas Partey’s arrival at Arsenal has finally introduced us to the Granit Xhaka we have been wanting to see since 2016. The former Atletico Madrid midfielder has been the perfect foil for Xhaka. With his presence, the Swiss international has been able to play a more advanced role as he dons for his country.

The duo has already kicked for Arsenal and if they are in their best of form against Manchester United, things will be pretty easier for the hosts. The Gunners may even be able to take the game by the scruff of the neck and exert their dominance on Red Devils. The camaraderie of Xhaka and Partey will be a deciding factor of the result we will see post 90 minutes of football.

In the last few games, we have seen the creativity being regained in the midfield with the team being benefitted by Xhaka’s structured passes and Partey’s dynamism. The combination of physicality with technical acumen, defensive nous with intense energy and pin-point passes with extreme intensity has helped the Gunners don their opponents. The duo will yet again want to showcase their A-game and negate the threat of Bruno Fernandes and Paul Pogba.

Partey has proved to be a perfect partner for Xhaka as the deep-lying playmaker has been able to make quality passes to his players ahead. Partey has been the one to bring control in the midfield while Xhaka has been given the freedom to structure the attacks. All things said, Xhaka is now the architect who brings fluidity in the midfield while also lying deep to stop the opposition from making attacks.

The duo also brings a physical presence in the midfield that will stand in need of United’s attack. More than the forwards, the midfielders of United possess a threat with the likes of Pogba and Fernandes hitting the prime of their boots. The midfielders will have to be dispossessed as soon as possible and should not be given more time on the ball to play with. The task of which will be shouldered on to Xhaka and Partey who have the acumen to pause attacks.

Partey as we all know has been one of the world’s best in making tackles, interceptions, recoveries, and winning aerial duels in centre of the pitch. The Frenchman is now the shield of defense that has given Xhaka the leeway of making provocative passes.
With Partey covering behind, Xhaka has been able to find spaces to play with and advance the game forward.

Both the midfielders accompany each other pretty well and cover-up for either one’s weakness. While Xhaka as we all know is weak in terms of positional awareness, Partey is an uncanny reader of the game and has eyes that of a centre-back which makes him read the game and understand the spaces in the pitch.

To stop United from moving forward, Partey and Xhaka will have to be normal and play the kind of football they have been playing for quite a few games now. Arteta will once again task Partey from receiving the ball from the defence, surge up the pitch and pass the ball to Xhaka who will act as a bridge between the attackers and Partey.

Stopping the two world-class defenders in Pogba and Fernandes will be a herculean task but with Arsenal’s midfield pivot in action and in their given day, they can stop any force coming their way!

Brighton & Hove Albion vs Tottenham Hotspur: Preview | Premier League 2020/21
Nicolas Pepe: Can the Ivorian Turn it Around?
To Top